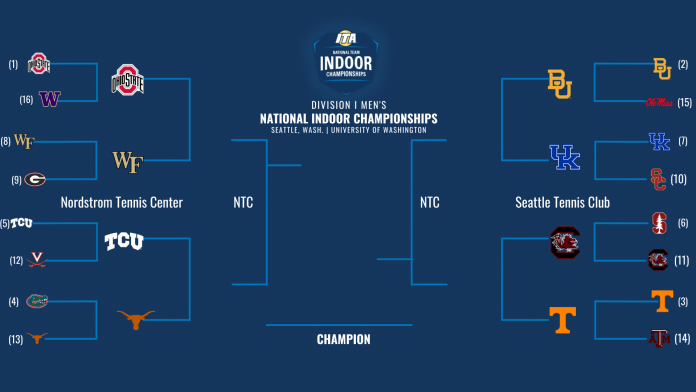 The opening day of the 2022 ITA Division I Men’s National Team Indoor Championship had a little bit of everything.

A lively crowd on hand to watch host Washington take on No. 1-seed Ohio State. A pair of upsets and plenty of high-level competition.

Texas, the No. 13 seed, scored the biggest upset of the day. The Longhorns avenged a loss from earlier in the dual match season to take down defending NCAA Champion and fourth-seeded Florida 4-3. Texas takes on in-state foe and No. 5 seed TCU in the quarterfinals.

South Carolina rallied from 3-1 down to defeat No. 6 Stanford 4-3. The No. 11 Gamecocks are set to face No. 3 seed Tennessee in the quarters.

The host Huskies, playing to a packed house at the Nordstrom Tennis Center, took the doubles point against the Buckeyes. Washington’s Jack Davis and Brandon Wong handed the No. 1-ranked Ohio State duo of Matej Vocel and Robert Cash their first loss of the 2021-22 season. The Buckeyes rallied in singles to claim a 4-1 victory, and will meet No. 9 Wake Forest in the quarterfinals.

The University of Washington serves as event host, with action taking place at both the Nordstrom Tennis Center and Seattle Tennis Club. Live streaming via PlaySight is available at Nordstrom, with Track.Tennis providing live streaming from STC. Live scoring via Tennis-Ticker will be at both sites. Links to live streaming and scoring will be available on the Tournament Central page.