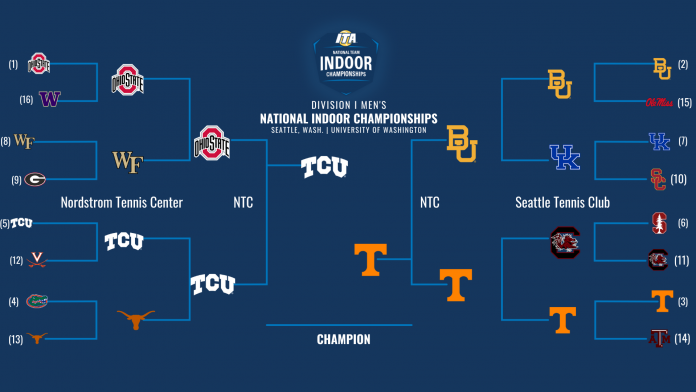 It all comes down to this.

TCU, the No. 5 seed, versus No. 3 Tennessee for the 2022 ITA Division I Men’s National Team Indoor Championship. A rematch of a tightly-contested 4-3 early season matchup won by the Volunteers. Action from the Nordstrom Tennis Center gets underway at 12 p.m. PST. Live streaming via PlaySight and live scoring via Tennis-Ticker can be found on the Tournament Central page.

For the second time in 2022, the Horned Frogs scored a victory over the nation’s No. 1-ranked team. TCU defeated Florida in the opening weekend of 2022, and in the ITA National Team Indoors semifinals, they edged Ohio State 4-3. TCU won the doubles point, yet had to rally in singles after the Buckeyes claimed three straight courts to go up 3-1. After wins at No. 1 and No. 6 and No. 1 singles leveled the match, Sander Jong sent TCU into the final with his win at No. 3 singles.

Tennessee outlasted No. 2 seed Baylor 4-2 in the other semifinal. The Volunteers also sealed their win at No. 3 singles, with Emile Hudd scoring his second consecutive match-clinching point. Tennessee jumped out to a 1-0 lead after doubles and a 2-0 lead after a win at No. 5 singles. The Bears fought back, winning two of the next three singles contests to bring the match score to 3-2, but Hudd closed things out to send Tennessee into the final.

2019 ITA Division I National Player of the Year Nuno Borges...