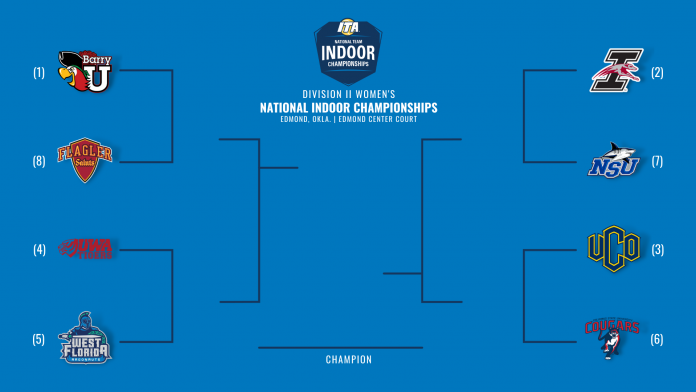 Note: Due to inclement weather, the start of the 2022 ITA Division II Women’s National Team Indoor Championship has been moved back a day to Saturday, February 26. The tournament will run through Monday, February 28.

Chosen based on their year-end ranking after the 2021 Spring season, all eight teams in the 2022 DII Women’s National Team Indoor Championship currently rank within the Top-15 of the Feb. 17 Division II Women’s Top 25 Coaches Poll, including the top six ranked teams in the country.

Barry (1) will enter the 2022 National Indoor Championship as the No. 1 seed after an impressive 2021 Spring season in which they finished undefeated and won their fourth-straight NCAA National Championship.

The 2021 DII Women’s National Team Indoor Champions, UIndy (2), are back again this season as they look to build on one of their best seasons in program history in 2021 when they finished as NCAA National Runners-Up.

West Alabama (4) will be the lone team making their ITA National Team Indoor Championship debut in 2022 as they will square off with familiar foe and Gulf South Conference rival, West Florida (5) in the First Round of competition.

Across all conferences, the Sunshine State Conference, Gulf South Conference, and the Peach Belt Conference all have two teams represented in this year’s tournament while the remaining two schools come from the Great Lakes Valley Conference and the Mid-America Intercollegiate Athletics Association.

All of this weekend’s action will be live streamed with live stats also being available through our Tournament Central Homepage which can be found here.