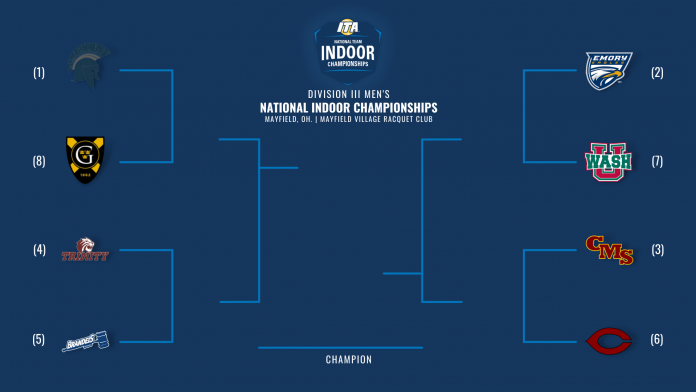 In what has become a staple of the Division III spring season, the 21st annual ITA DIII Men’s National Team Indoor Championship is set to get underway this Friday from the Mayfield Racquet Club in Cleveland, Ohio.

With the 2021 DIII Men’s Indoor Championship canceled due to the Covid-19 pandemic, the 2022 tournament will once again bring together eight of the top Division III Men’s teams from around the country to compete for a National Championship.

After finishing NCAA National Runners-Up in 2021, hosts Case Western Reserve (No. 1) enter the 2022 Indoor Championship as the top-seeded team as they will look to bring home a National Championship on their home soil in Cleveland.

Emory (No. 2) will be the two-seed this weekend after having a memorable season in 2021 in which they finished 10-3 on the season and took home the programs sixth-ever NCAA National Championship.

Across the entire field, all eight teams have made National Team Indoor Championship appearances for what is shaping up to be a highly competitive three days of action from the Mayfield Racquet Club.