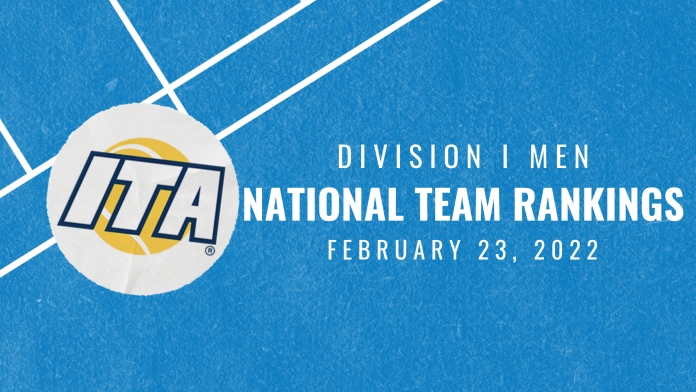 After a busy weekend of play from the 2022 ITA Division I Men’s National Team Indoor Championship, the first computer rankings of the season are now live with Tennessee narrowly taking the top spot in the Feb. 23 rankings.

Edging out National Indoor Champions TCU (No. 2) by just over four hundredths of a point, the Volunteers reclaim the No. 1 spot in the rankings after trading early season indoor matches with the Horned Frogs.

Coming in just behind Tennessee and TCU is Ohio State (No. 3) who falls two spots from the Feb. 9 ITA Top-25 Coaches Poll after suffering their first loss of the season at the National Team Indoor Championship this past week.

Baylor (No. 4) and Southern California (No. 5) round out the Top-5 in this week’s National Team Rankings, while the SEC still dominates across the Top-25 having nine member teams represented in just the Top-25 alone of the Feb. 23 rankings.