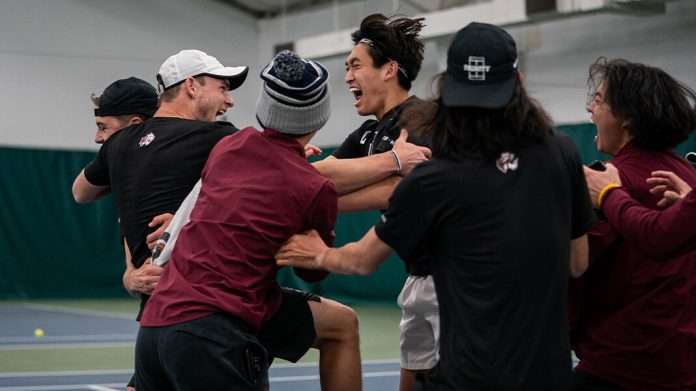 As snow and ice covered the ground outside the Mayfield Racquet Club, inside, action was as fiery as ever as play began at the 2022 ITA Division III Men’s National Team Indoor Championship.

Bringing together eight of the top Division III Men’s programs from across the country, today’s opening round of competition played to the upsets as the No. 2 and No. 3 seeded teams in this year’s field suffered first round losses.

In the morning matches, Chicago (No. 6) pulled out a tight 5-4 victory over Claremont-Mudd-Scripts (No. 3) after securing two points from doubles play and three points from singles, including a clinch from the No. 4 singles position.

In the afternoon portion of today’s action, the higher seeded teams fared much better as hosts Case Western Reserve (1) and Trinity (4) each picked up wins to advance to tomorrow’s Semifinals.

After falling behind early, Trinity relied heavily on the singles portion of play picking up the additional four points needed to secure a 5-4 victory over Brandeis (5).

For Case Western Reserve, the energy was on full display from the very first serve of the match as they controlled much of doubles and singles play to cruise to a 8-1 victory over Gustavus (8) in front of a packed Mayfield Racquet Club.

Tomorrow kicks off Semifinal action from the 2022 DIII Men’s National Team Indoor Championship. As always you can follow along with the live stream or live stats through our Tournament Central Homepage which can be found here.