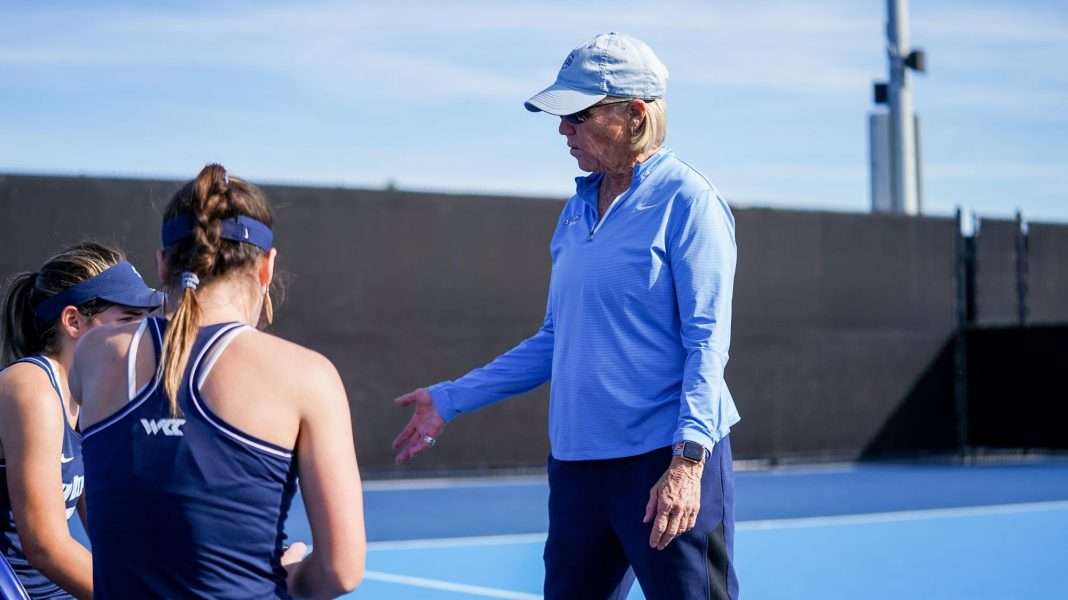 Currently in her 37th year as the head coach of the University of San Diego women’s tennis program, Sherri Stephens announced she will retire at the end of the 2021-22 season.

In nearly four decades, Stephens has led the Toreros to 418 wins, 13 NCAA Tournaments and a WCC championship in 2012. She is top-50 in career wins in women’s college tennis history and 19th among active head coaches.

“In 1984, Rev. Patrick Cahill provided an opportunity for me to head the women’s tennis program at the University of San Diego,” said Stephens. “At 28 years of age, my passion for coaching was realized. I knew I had something exceptional to work with. I was in ‘America’s Finest City’ on an extraordinarily beautiful campus and part of a renowned academic institution. With the support of so many I have truly lived the dream. It has been a blessing to experience the world of tennis and life with the outstanding student-athletes, coaches, faculty and staff of USD.”

Stephens arrived at USD in the fall of 1984 – a few years after the program transitioned to Division I – and built USD women’s tennis into a consistent contender at the conference and national levels. The four-time WCC Coach of the Year accumulated 30 top-three finishes in the 54 years of WCC women’s tennis, including 19 second-place finishes and a title in 2012.

“Sherri has enjoyed a truly extraordinary career, and she will leave a remarkable legacy at the University of San Diego,” said Associate Vice President and Executive Director of Athletics Bill McGillis. “While there have been countless achievements on the tennis court – from WCC championships to NCAA tournament appearances, All-Conference honorees, All-Americans, and Coach of Year honors – she’s made an even greater impact off the court. Over the last 37 years, Sherri has loved and mentored the women in her program and taught lessons that will last a lifetime. Sherri has been a wonderful role model for coaches at USD and beyond, and her greatest successes can be measured in the amazing women who have represented the Toreros and gone on to their own wonderful careers and families.”

On top of the conference success, Stephens and USD have made a statement on the national stage throughout her tenure as well. After making the program’s first appearance in 1989, the Toreros reached the NCAA Tournament in four straight years from 1989 to 1992, eight times in the 1990s, and a total of three times since 2011 (last: 2021). Stephens guided the program to rank among the top-60 in the nation for 25 seasons, including eight times in the top-25, six times in the top-40, and six times in the top-50. The Toreros have finished in the top-40 in each of the last two seasons in 2019 and 2021, resulting in bids to the NCAA Championships. The 2021-22 Toreros are well-positioned to compete for the WCC championship and make a run in the NCAA Tournament.

Lesenarova, a member of the USD Athletics Hall of Fame and WCC Hall of Honors, became the greatest Torero tennis player under Stephens’ watch. The four-time All-American won the 1999 NCAA Singles Championship – holding a No. 1 ranking all spring and winning three of four ITA Grand Slam events – while also achieving a No. 1 national ranking in doubles in 2000.

Stephens has been recognized as the top of the class of WCC coaches four times, and after winning her first career honor in 2004, she won the award in back-to-back years in 2011 and 2012. In 2011, Stephens led the Toreros to 19 wins – second-most in program history – and reached the NCAA Tournament. That year, USD reached the second round of the national tournament, which matches the program’s best finish. A year later in 2012, Stephens took the Toreros to the top of the WCC table – after 18 runner-up finishes – and won the program’s first conference championship.

Well-respected among her peers in the coaching profession, Stephens has been a featured speaker at several ITA Coaches’ Conventions. Twice she has had the privilege of coaching at the Olympic Sports Festival (1993/South, 1995/West), with her 1995 squad winning the gold medal. She was named the 1994 Female Coach of the Year by the USTA, Southern California Section/San Diego District. Sherri has been involved with numerous administrative positions within collegiate tennis such as: the NCAA Ranking Committee, the NCAA Rules Committee, and Tournament Chairman for the All-American National Championships.

A native of Phoenix, Arizona, Stephens was a nationally ranked player on the junior circuit before enrolling at the University of Arizona. After completing her collegiate playing career in 1979, she began her coaching career as an assistant for Arizona.

“Coach Stephens is a giant in the collegiate coaching and tennis communities,” added McGillis. “We are forever grateful for the immense contributions Sherri has made to the university, our athletics program and our women’s tennis program.”

“While our results on the court have been significant, the true measure of success lies with the women of USD Tennis,” Stephens said. “We will forever be united.”