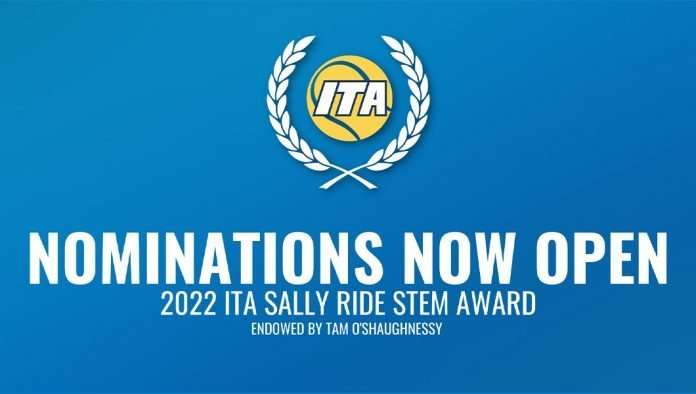 When Sally Ride became the first American woman to soar into space, she captured the nation’s imagination as a symbol of the ability of women to shatter barriers. But Ride’s historic spaceflight represented just one aspect of a remarkable and multi-faceted life. She was also an athlete (ranked nationally as a junior tennis player before playing for Swarthmore University and Stanford), a physicist, a writer, and an inspirational leader in science education.

“College tennis continues to develop championship human beings on and off the court,” proclaimed Dr. Timothy Russell, the Chief Executive Officer of the ITA.“College tennis is a pathway to success in life and includes so much of what makes America and higher education remarkable. Sally Ride embodied all that is great about our country and our sport as does Tam O’Shaughnessy. Tam’s thoughtful and generous gift elevates the ITA’s comprehensive awards program and will inspire our future ITA female student-scholar-athletes to reach for the stars.”

Ride received many honors including the Presidential Medal of Freedom, our nation’s highest civilian honor, a Sally Ride USPS Forever Stamp, and recently a Dr. Sally Ride coin as part of the U.S. Mint American Women’s Quarters (AWQ) Program, which is now circulating across the nation.

“Sally would be thrilled to have this ITA award named after her,” said Tam O’Shaughnessy. “Sally loved sports (especially tennis) and science (especially physics) her whole life. This award combines sports and science–a perfect match! Sally would love that each year a student-athlete who also loves tennis and science is supported in her dreams.”

The annual recipient of the ITA Sally Ride STEM Award will be a female student-athlete who is a United States citizen, has graduated from a four-year American college or university, has lettered a minimum of two years on the school’s varsity tennis team, and has exhibited zeal, dedication, and perseverance towards her tennis training and competition, STEM studies, and long-term goals.

The inaugural recipient of the award will receive a grant in the amount of eight thousand dollars ($8,000) to pursue her dreams. The award money given to the student-athlete may be used in any way she wishes [e.g., tuition, books, rent, etc.].

In addition, the ITA will also donate two-thousand dollars ($2,000) to the women’s tennis program of the institution from which the award winner graduated.

Nominations for the Inaugural Sally Ride STEM Award are now open and will run through Monday, April 18th. For those interested in nominating, please send all of the required nomination materials in one email to Rachel Dagen (rdagen@itatennis.com).