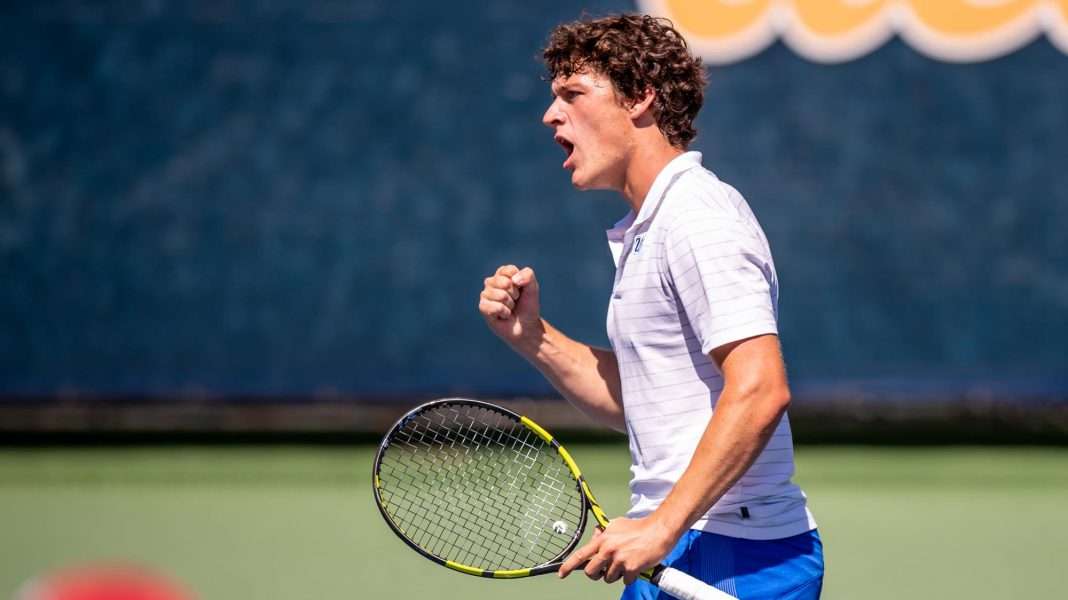 With the college tennis spring season back in full swing, the ITA x Universal Tennis Player of the Week awards were once again given out to 10 student-athletes – five men and five women – this week to celebrate their success. All recipients had an outstanding week of play and shined for their respective teams. Their success was reflected in the change in their UTR — which was as large as a 0.41 increase.

The UCLA Freshman, Alexander Hoogmartens, has started his collegiate career with a bang taking down some of the Pac-12’s top talent in his first few months as a Bruin. Off to an 8-2 start from UCLA’s No. 2 and No. 1 positions, Hoogmartens has hit his stride as of late winning his past seven matches which include three ranked victories. Hoogmartens has also gained recognition from the Pac-12 for his standout play over these past few weeks earning Pac-12 Player of the Week honors this past week.

Helping Iowa State achieve one of their best starts in program history, Sophmore Chie Kezuka has been a key reason for the Cyclones success this season going 13-0 to start the season. Kezuka, who has a knack for clutch wins, helped Iowa State win their first-ever Big 12 Championship last season as well as their first-ever NCAA Tournament match, clinching both for the Cyclones. This success has followed Kezuka into 2022 where she has dominated to start the season primarily from Iowa State’s No. 5 position.

The McKendree University Sophmore, Julappagari Anurag Reddy, has gotten off to a fast start in 2022 starting the spring season 6-1 primarily from the Bearcats No. 4 position. Reddy has helped McKendree to a 9-1 start to the season, including ranked wins against Rockhurst University as well as Harding University this past week.

Zeynep Cakirer of Lees-McRae College has been one of the steadiest players in the Bobcats lineup this spring providing veteran leadership from atop of the lineup. Victorious in her last four matches, Cakirer secured two straight-set victories and one three-set victory in the three conference matchups so far for Lees-McRae.

Playing for one of the most storied Division III programs from around the country, senior Joel Hug has gotten off to a great start to the 2022 season. Currently 7-0 on the season, Hug has picked up some big wins for Gustavus at primarily their No. 1 position. Not just winning, but winning dominantly, Hug has beaten all seven opponents he has faced this season in straight sets.

Maggie Shoemaker and the Calvin College Knights have gotten off to a fantastic start to the 2022 spring season, starting 11-1 on the year. The freshman from Holland, Mich. has started her collegiate career 5-2 from the No. 3 position for the Knights. In all five wins this spring for Shoemaker she has closed out the matches in dominant fashion winning in straight sets in each.

Kaleb Parish took the biggest leap in UTR rating this week rising 0.41 points after a fast start to his freshman campaign. Playing primarily from the Warriors No. 5 and No. 6 positions, Parish has been a steady fixture in East Central lineup this spring.

In her freshman campaign, Martina Paillet of Wallace State Community College has made an instant impact for the Lady Lions. Currently 8-3 on the year, Paillet has been an influential aspect of Wallace State’s success this season. This success includes wins in their past six matches and a perfect 7-0 start to conference play.

In his sophomore season, Jhoel Quinonez from Ottawa University – Kansas has elevated his play to start the season from the Braves No. 3 position. Starting 7-3 in singles play, Quinonez picked up three wins this past week and has won his past five matches. Building on a freshman campaign in which he finished 11-4, Quinonez will look to continue to build on his successes as the Braves season progresses.

Hanna Linderboom has played a key role for William Woods during her freshman campaign in 2022. Playing across the No. 1 to No. 4 positions for the Owls, Lindeboom has been a tough opponent to take down all season long. Against nationally-ranked Lindsey Wilson, Lindeboom secured a big three-set victory over Reshma Challarapu for her marquee victory so far this spring season.

The ITA x Universal Tennis Player of the Week honors a collegiate tennis player whose increase in UTR rating throughout the previous week was indicative of his/her high level of performance, including notable wins such as clinching matches and upsets.