Home After College Kylie Duckworth: From the Court to the Operating Room 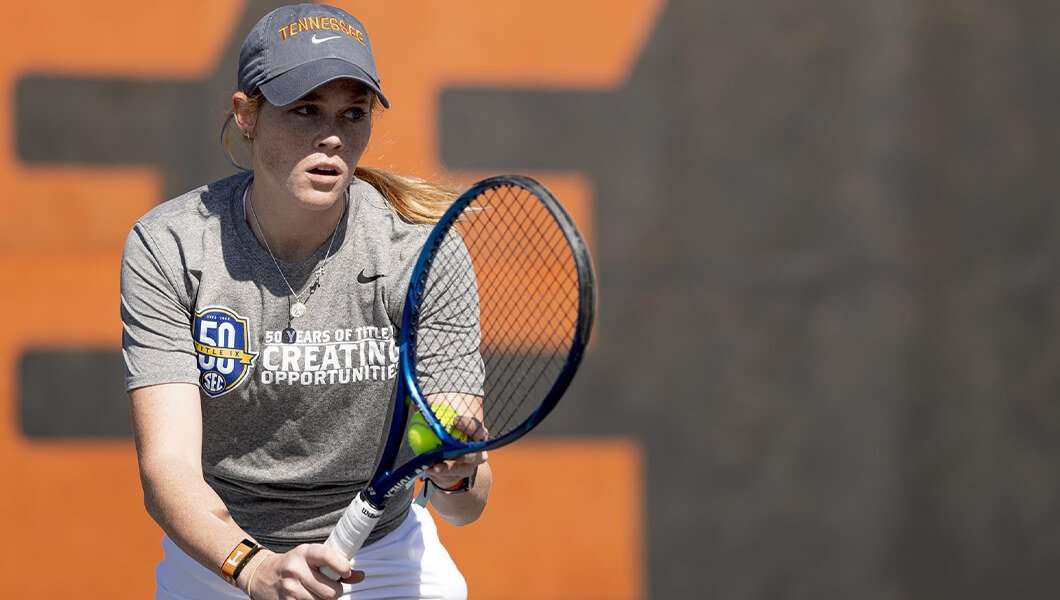 The strains and challenges of being a student-athlete are numerous: maintaining a practice schedule, playing in tournaments during the fall, and having dual matches every weekend in the spring. On top of that, account for all the behind the scenes preparation: eating healthy, working at your training regimen, and getting enough sleep. That’s not all though, add in a major in biochemistry and cellular and molecular biology.

That is all in a day’s work for future doctor Kylie Duckworth.

Duckworth is in her final year on Rocky Top and is co-captain of the 2022 women’s tennis team. She has been a staple of excellence in the community and the classroom, earning three ITA All-Academic Scholar-Athlete awards, two Spring SEC Academic Honor Roll nods and places on the 2021 SEC Community Service Team and the 2018-19 First-Year SEC Academic Honor Roll.

Duckworth is co-president of Tennessee’s Student-Athlete Advisory Committee and serves in an advisory role for Provost John Zomchick, coming up with ideas and raising concerns about the strategic plan of the University.

With so much rush, it’s all about being in the moment for Duckworth.

“For me, I come to practice every day with the intention of putting all my energy into what I am doing,” Duckworth said. “There are so many things going on, so I try to compartmentalize them so I can have enough energy to get through the day, but I think my version of leadership is quiet. It’s ‘let’s get this done then move on to the next thing.’ It’s also about being dependable and reliable and doing what is expected of you.

“These whole four years, I’ve challenged myself to be a person that gives it their all each time and you can depend on me to give that every time out. That is just another way I try to lead.”

Flashback to April 10, 2021. The Lady Volunteers faced Alabama at Goodfriend Tennis Center for a noon match, looking to finish the regular season undefeated at home. Playing on Court 3 with Daria Kuczer was Kylie Duckworth, but there was something much more important going on for her on that rainy day in Knoxville.

To be considered for admission to med school, prospective students must take the Medical College Admission Test, MCAT for short.

“You have to schedule the MCAT months and months in advance because the spots get taken pretty quick, so I signed up for a Saturday because normally we play Friday and Sunday. I thought there would be no problem but, as it turned out, we had a match on Saturday.”

“I played that doubles match against Alabama and immediately drove to the testing center to take the MCAT, which is like a seven-hour exam. I did not play well that day either, I was just so jacked up and nervous. I mean, I had been studying for that exam for five months, so that was an adventure.”

The true adventure is the journey and Duckworth is still figuring out exactly what field of medicine she wants to study. It is no surprise, though, that she has already scouted the playing field as far as her options go.

“I am definitely drawn to some of the surgical subspecialties. I shadowed a surgical oncologist and some vascular surgeons and things like that. I really enjoy the fast-paced nature of it all. I think all my years of playing sports at such a high level has drawn me to that competitive and quick-decisional side of things.”

As her time on Rocky Top has gone along, the lessons learned on the court have pervaded other aspects of her life, and it’s growth like that which underscores the true meaning of intercollegiate athletics.

“I felt like when I went into interviews for school, my ability to communicate with people similar to me was strong, but I was able to communicate with those of a higher status than myself. That’s something I have developed both on the court and during my involvement with SAAC.”

“As co-president, I have had to communicate to this big group of people and try to make it clear and concise. I then take what we learn in those meetings to administration and try to improve different elements of the experience. It was because of these experiences that I felt comfortable during that interview process.”

The Georgia native and the rest of the Lady Vols prepare to face her home-state school, No. 15 Georgia, Saturday afternoon at noon at Barksdale Stadium.

What College Tennis Did for Me