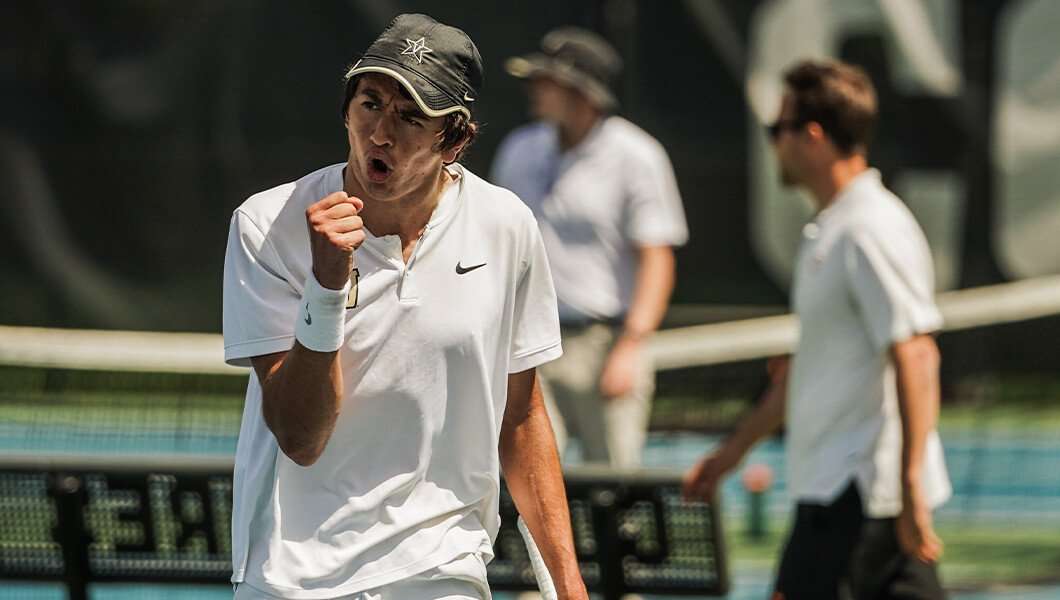 Sometimes in tennis the breaks go a competitor’s way, sometimes they don’t. For a good chunk of Joubert Klopper’s Vanderbilt career, the breaks had definitely not been going his way.

But going into the 2022 SEC Tournament in Athens, Georgia, this week, Klopper has finally found some solid footing in his individual game and believes he and his teammates are poised to make a deep postseason run.

“I think our team right now is up there with some of the best teams in the SEC. Although the results don’t show it, we can compete with some of the very best in college tennis,” Klopper said. “Our (recent) match against Tennessee, although it was heartbreaking, it showed us we were a couple points away from beating a top-five team.

“If we could all just put in collective performances – (head coach Ian Duvenhage) always talks about showing up in a good space emotionally and mentally – I think if all of us can do that then the sky is the limit for the team. I don’t think there are a lot of people that want to play us right now. We can be dangerous in the SEC Tournament.”

Klopper arrived in Nashville in January of 2020 ready to take on the SEC and college tennis as a promising prospect hailing from South Africa. But after a few matches he started to feel pain in his elbow.

Further examination revealed a stress fracture that required surgery and the installation of a screw in the damaged joint. The COVID-19 pandemic shortly thereafter ended all competition for Vanderbilt that spring, meaning Klopper didn’t really miss any playing time, but he did face four months of grueling rehabilitation.

Klopper said he still felt pain in his elbow for about a year after the surgery.

“I kept playing with the pain and it was horrible. That was definitely the first major injury I’ve had,” he recalled. “It was more of a mental struggle than a physical one. Luckily I was able to come through it.”

When Vanderbilt resumed practice later in 2020 and begin preparing for its fall season, Klopper was once again dealt an unfortunate blow.

Practicing with a teammate, Klopper went to return a shot. He never saw the stray tennis ball that had rolled on the court, he lost his footing after stepping on the ball and tried to break the ensuing fall with his left arm – that arm broke when Klopper hit the ground, a moment Klopper said, “was just gruesome.”

Shortly thereafter, Vanderbilt athletic trainer Jordan Pierce suggested to Klopper that Klopper work with sports psychologist David Sacks. That partnership has been pivotal in helping Klopper return to form both on and off the court.

The SEC Player of the Week on Feb. 16, Klopper is 27-11 in singles play this season and 14-8 at the team’s No. 2 singles spot. He has also defeated five ranked opponents and has clinched five doubles points.

An economic major and business minor, Klopper’s family in Bloemfontein, South Africa, runs a successful chain of department stores. Klopper said a career in business is likely in his future after he hangs up the racket.

But for now he’s relishing every moment he’s on the court because he knows all too well the next serve, the next return or the next point could be last.

“I talk a lot with people about this – while sitting out and not being able to play it made me realize how much I like the sport and how important it is to me. It’s something I took for granted every day while I was healthy,” Klopper said. “Being able to practice with my friends and with our phenomenal coaches, I take gratitude from that and that has helped me become a better player and a better person as well.”