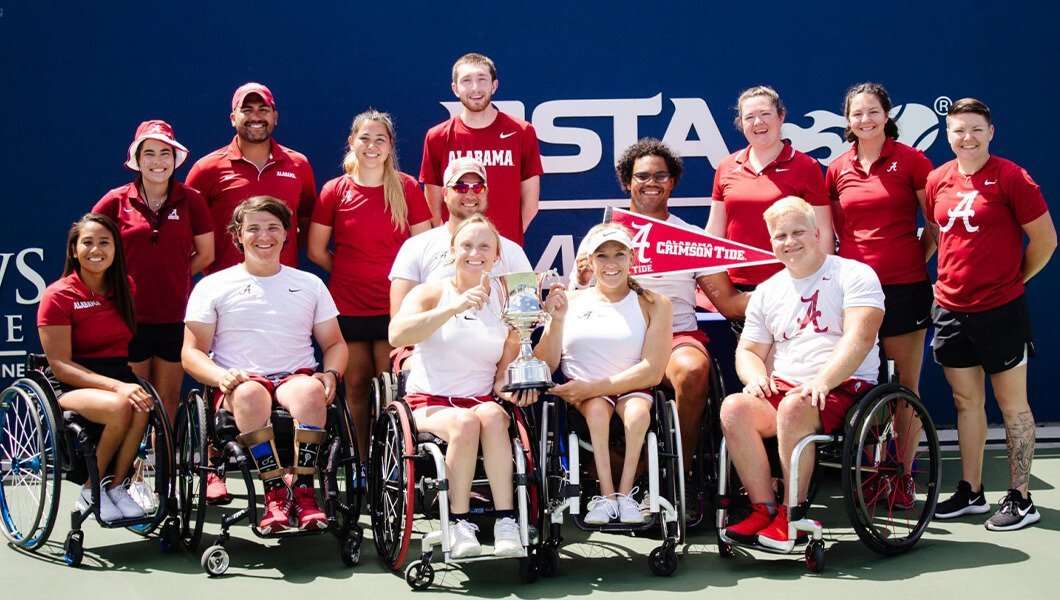 Courtesy of Victoria Chiesa and the USTA

Dynasty, thy name is Crimson Tide: For the sixth straight year, and seventh year overall, the University of Alabama are national champions in collegiate wheelchair tennis.

The Crimson Tide took home the team title at the 21st annual USTA Collegiate Wheelchair Championships on Saturday with a victory over San Diego State, while senior Thomas Venos topped teammate Nathan Hunter to win the individual championship in the ‘A’ singles bracket and to Alabama’s haul. Alabama came through a nine-team field to take home the overall title, while Venos and Hunter two of a record 32 individual competitors at the event who represented 12 schools in all.

Both totals were an all-time high for the competition, figures which have steadily increased in each of the last five years.

“It’s incredible. I was a part of some of the earlier days when I started about seven years ago, and there was only two, three teams showing up,” Alabama head coach Evan Enquist said. “It’s definitely a different feel now, very much more collegiate. The uniforms, the competition … just everything is better.”

“This is what we train for all year. It’s being able to put on your uniform, represent your school, and I think I think they value this experience above all else,” Enquist added. “In five years, I would love to see eight to 12 schools that all have a roster of six to eight players that are very talented and very deep programs. I think sustainability is really important right now … I think that is absolutely key.”

Wheelchair users who are either students, staff or somehow affiliated with colleges and universities are eligible to compete in both the team and individual competition; Oluwaferanmi Okanlami, an assistant professor at Michigan also works as a director in the university’s office of student life in accessibility, accommodation and services for students with disabilities, for example, successfully defended his ‘C’ singles title in the Wolverines’ second year at the event. A former track and field athlete at Stanford University, Okanlami suffered a spinal cord injury in his third year of residency in orthopedic surgery at Yale-New Haven Hospital, and he also directs Michigan’s adaptive sports and fitness program that includes adaptive track and field, para-equstrian and wheelchair basketball in addition to wheelchair tennis.

He says that events such as the Collegiate Wheelchair National Championships, and investment in adaptive athletics from both the schools that attend them and national sports governing bodies like the USTA, can serve as a blueprint and model for equity in postsecondary education nationwide.

“What we’re trying to do to create equitable access to sport for student-athletes with disabilities … and it’s great to see what people are doing to provide that access,” Okanlami said. “What you can see [working in his position] is that many students do not know that they deserve to have the same access as their non-disabled peers. What this event does is it demonstrates not only to disabled student athletes, but to their parents to non-disabled individuals, and to really anyone that’s watching, that there deserves to be and needs to be that access, and that it’s being done at the highest level on this stage.

“To be able to be on [the USTA National Campus] for collegiate nationals with other programs to see that growth, seeing student athletes getting an education and also being able to then play sports, that is integral to that.”

Within the last year, Alabama has also changed the game for access on its own campus. The school opened a brand-new facility dedicated to its wheelchair tennis program and also hosted the first-ever wheelchair tennis dual match when it welcomed Clemson, Michigan and UCLA to Tuscaloosa in February. Enquist hopes that these efforts can serve as an inspiration to other schools who’ve started adaptive athletics programs to hire full-time coaches and invest in scholarships, two areas he believes have the biggest potential for growth next.

The three schools that were in attendance at nationals for the first time in 2022, including the University of Virginia, certainly took notice. Wheelchair tennis in its infancy in Charlottesville—the team officially received club status just a week prior to arriving in Orlando—and Mason McGrady made history as the first-ever Hoos player to compete at the event, where he was supported by coach Catherine DeSouza. DeSouza is the executive director of the Piedmont Area Tennis Association, a community tennis association that’s been servicing Charlottesville for more than 30 years, and is a member of the USTA’s national wheelchair tennis committee; she hopes her dual role can not only help bring more tennis players to campus, but other adaptive sports.

“I didn’t grow up with sports, I didn’t grow up with academic sports that I could actually go out for. I was captain of the chess team, and that was it. I really like the idea of being able to be in a competitive environment because outside of academics, I haven’t really been able to achieve that,” McGrady added. “Just to be here, it’s a good first step. I want to develop it more. Ideally, I want this program to be able to go to more tournaments than just nationals. I want us to be able to expand and maybe even potentially make our own tournaments down the road.”

DeSouza sums it up succinctly, too. “Everybody has been so nice to offer advice. They’ve been giving him tips … no matter what team you’re on, everybody’s willing to share, everybody’s been so kind,” she said. “There’s no going back. Now that we’re here, there’s no turning back.”

Collegiate wheelchair tennis is organized by the USTA and supported by the Intercollegiate Tennis Association (ITA), the governing body of college tennis, bridging the gap between junior play and the professional tour. Its three-fold purpose is to grow the sport, encourage individuals with disabilities to pursue a college education, and give students with physical disabilities an equal opportunity to compete in intercollegiate sport as a representative of their institution.