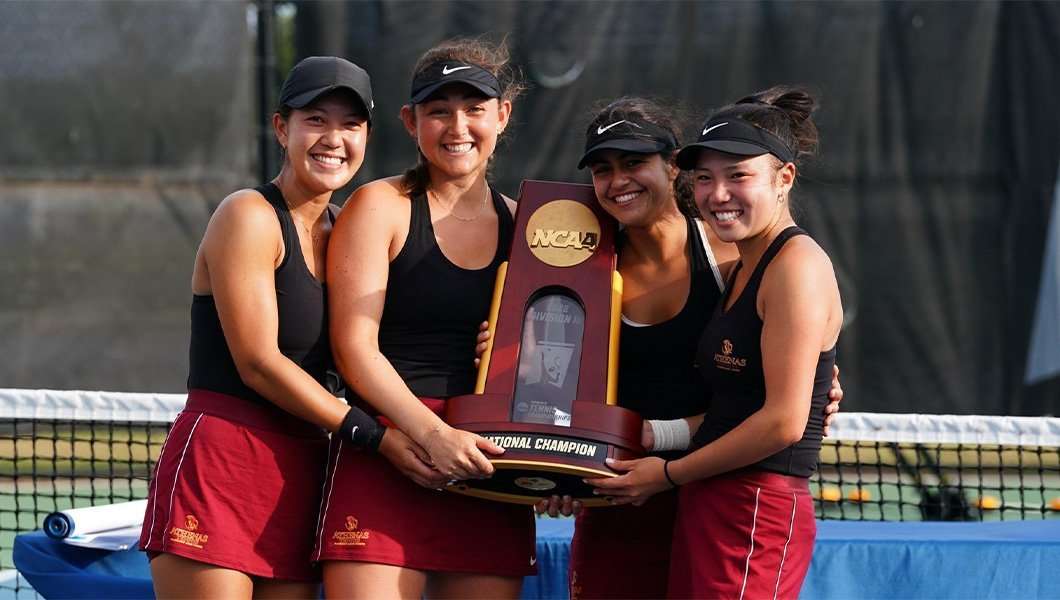 As we close out another collegiate dual-match season, we’ll look back at the 2022 NCAA Division III Women’s Team, Singles, and Doubles National Championships to recap the champions as well as the history made in Orlando, Florida over the month of May.

After taking home their first NCAA Division III Women’s National Championship in 2018, the standard for success for the Claremont-Mudd-Scripps Women’s Tennis team has been at an all-time high over these past few seasons.

However, as anyone in the Athena’s inner circle will tell you, this past fall and most of this spring was nothing up to standards for the CMS team.

After failing to have a singles player qualify for the ITA Cup this past fall, the Athenas went on to finish a lackluster fourth in the ITA National Team Indoor Championship while sustaining losses to Emory and Pomona-Pitzer multiple times throughout the Spring season.

Unphased by the pressure and results, the CMS team did not let this uncharacteristic start to the season define them as once postseason play began the Athenas kicked their play up to a new level which would ultimately propel them to their second National Championship in the past three Tournaments.

Within the NCAA Tournament, the Athenas once again rose to a new level as a team only dropping three points across five matches en route to the title.

Coming into the NCAA Singles Championship unseeded, Christensen played well beyond her years taking down some of the biggest names in Division III tennis including top-seeded Sylwia Mikos and fourth-seeded Angie Zhou from Pomona Pitzer in the Championship match.

The victory caps off a stellar Freshman campaign for Christensen where she helped lead the Jumbos to the NCAA Regional Finals as well as an NCAA Doubles National Championship which she won with partner Tilly Rigby.

Christensen becomes just the second player in Tufts Women’s Tennis history to be crowned the Singles National Champion joining Julia Browne who won back in 2010.

Fighting their way back after dropping the first set in their Semifinal matchup, the duo went on to win four of the final five games of the match to advance to the championship later in the night.

Facing the duo of Erica Ekstrand and Yuu Ishikawa from Williams College, the Tufts duo harnessed their momentum from the earlier Semifinal match to jump out to a 6-1 first set advantage before cruising to a 6-3 victory in the second set to secure the match.