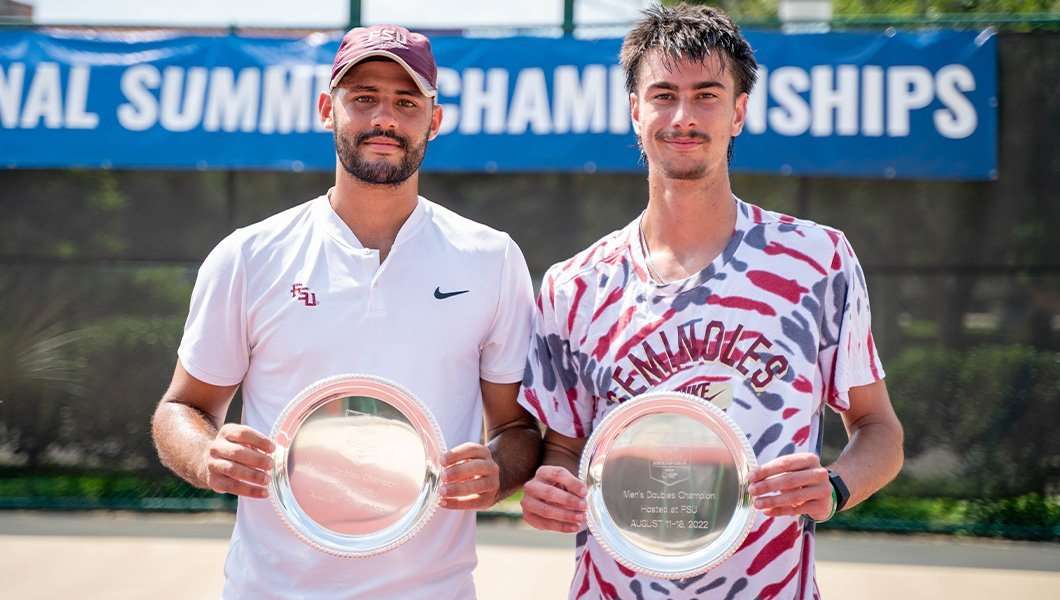 In singles, it was a day to remember for Michigan supporters as both the Men’s and Women’s champion played for the Wolverines. For the men, Jacob Bickersteth claimed his second consecutive National Summer Championship, while it was Julia Fliegler who took home the title on the women’s side of play. In the doubles finals, the Furman duo of Ellie Schoppe & Jessica Dawson took home the women’s title, while it was the Florida State pairing of Alex Bulte & Youcef Rihane who won the doubles title on the men’s side.

More details about each Championship Match can be found below:

In what was a back and forth match until the very last points, Michigan’s Jacob Bickersteth and Clemson’s Ryuhei Azuma showed their toughness throughout their three-set match under the bright Florida sun. Ultimately coming out victorious 4-6, 6-3, 1-0 (2), Bickersteth showed why he was one of the top seeds heading into the tournament, becoming just the second two-time ITA National Summer Champion in Men’s Tournament history.

Not just excelling in singles, Bickersteth and his partner William Cooksey (Michigan) also reached the Semifinals of the Men’s Doubles draw where they would ultimately fall to the Men’s Doubles Runners-Up, Trice Pickens & Presley Thieneman (Northwestern).

Fliegler Makes It Two-For-Two For the Wolverines

After dropping the first set 3-6 to Sysoeva, Fliegler found her grove in the second set and was able to draw the match even at one set apiece after grinding out a 7-5 victory in the second set. Now in a tiebreaker, Fliegler once again started things off with her back against the wall, dropping the first three points, before locking in once again to claim a 10-6 third-set victory as well as the Women’s Singles Title.

After taking down teammates Silagy and Chauvinc (Florida State) in the Semifinals to clinch their spot in the Men’s Doubles Finals, Alex Bulte & Youcef Rihane (Florida State) would not squander the opportunity to raise a title on their home courts, winning 8-4 over the Northwestern duo of Trice Pickens & Presley Thieneman in the Championship Match.

Capping off what was a dominant stretch of matches for the pair, Bulte and Rihane won by three or more games in all but one of their matches at the National Summer Championships, with the lone 8-7 decision coming in the Semifinals against fellow Seminoles.

In what is the second consecutive season in which a Furman player(s) have taken home a National Summer Championship Title, Julia Adams singles in 2021, Ellie Schoppe and Jessica Dawson showed great resilience throughout their Championship Match, coming back to beat Wisconsin’s Taylor Cataldi and Xinyu Cai 8-7 in the Finals.

Falling down 4-1 early in the match, Adams and Schoppe never stopped fighting for the next point as the duo would rattle off wins in six of the next eight games to take a 7-6 lead before sealing the victory in a decisive tiebreaker where the Furman pair would win 7-5 to take yet another National Summer Championship Title back to South Carolina.