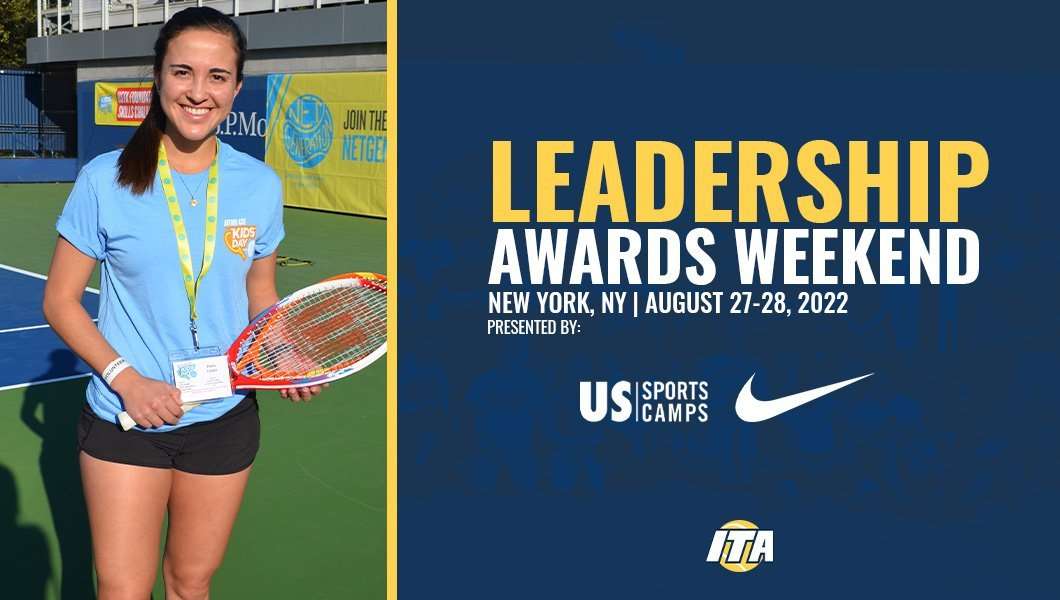 TEMPE, AZ – The Intercollegiate Tennis Association (“ITA”) is proud to welcome US Sports Camps as a sponsor of the ITA Awards Weekend, which celebrates one of the most robust awards programs in all of college athletics in New York City immediately leading up to the US Open.

“As we celebrate excellence on and off the court,” said  ITA Chief Executive Officer, Dr. Timothy Russell, “we are delighted to do so with a company and team that have provided visionary leadership and exemplary execution over the long haul. The efforts of US Sports Camps to share the joys of tennis and support college tennis have been and continue to be  extraordinary.”

In presenting awards to numerous student-athletes, as well as several former college tennis alums, the ITA Awards Weekend brings together some of the brightest stars from the college tennis world for a weekend full of service, humanitarianism, networking, and celebration.

With awards honoring the contributions of Arthur Ashe Jr, Sally Ride, Ann Lebedeff, and David A Benjamin to name a few, the ITA Awards Weekend sets out to showcase the college tennis experience and honor those who excel on the court as well off the court on college campuses and communities around America.

“We are thrilled to sponsor the upcoming ITA Awards Weekend to celebrate the accomplished individuals who have made an impact on the tennis community and paved the way for future generations,” said Wendy Shpiz, Senior Vice President at US Sports Camps.  “We are also looking forward to working with the ITA to further our mutual goal of providing opportunities to current and former collegiate tennis players and coaches who want to pursue a career in the tennis industry.”

US Sports Camps was founded almost 50 years ago by Charlie Hoeveler.  Initially a tennis camp business that has since grown into the largest camp provider in the world, US Sports Camps provides a positive and safe environment for millions of young campers over the years, as they’ve honed their skills in over 20 sports and activities.

To this day, a majority of the tennis camps hosted each year by US Sports Camps are hosted on collegiate campuses under the direction of college coaches. US Sports Camps makes those camps possible for a number of ITA Member Coaches every summer, and in the process, helps them promote their programs and their campuses while also generating badly needed funding to help defer the costs of coaching. For more information about becoming a US Sports Camp director/coach, visit www.sportscampcoaches.com/tennis.

Heading into 2022, US Sports Camps has served over 500,000 campers through their Nike Tennis Camps alone, with the intention to set these young athletes on the track to consider tennis as a future career path, whether as a player, coach, camp director, or any of the other numerous career tracks tennis has to offer.  By partnering with the ITA, US Sports Camps hopes to continue to reach a wider audience of the collegiate tennis community.

The 2022 ITA Awards Weekend is set to take place August 27-28 in New York City. On Saturday, award winners will volunteer at the US Open’s Arthur Ashe Kids Day before being honored at an Awards Dinner later that night. Then on Sunday, award winners will wrap up the weekend by taking part in a volunteer session at the Cary Leeds Center for Tennis and Learning.

The Intercollegiate Tennis Association (ITA) is the governing body of college tennis and is committed to serving college tennis and returning the leaders of tomorrow while promoting both the athletic and academic achievements of the collegiate tennis community. The ITA, founded in 1956, is comprised of nearly 1,700 men’s and women’s varsity tennis teams representing over 1,250 institutions, administers numerous regional and national championships, and the ITA College Tennis Rankings for nearly 20,000 college varsity student-athletes at NCAA Division I, II, and III; NAIA; and Junior College levels. The ITA also has a comprehensive awards program for players and coaches to honor excellence in academics, leadership, and sportsmanship. For more information on the ITA, visit WeAreCollegeTennis.com and follow the ITA on Facebook, Twitter, Instagram, and LinkedIn.

About US Sports Camps

2022 will be US Sports Camps 48th year in business. When Charlie Hoeveler began US Sports Camps back in 1975, he was already a lifelong tennis player who now holds over 50 USTA National titles. Today US Sports Camps, the official provider of NIKE Sports Camps, is the World’s largest sports camp company with over 1,000 camps in 16 different sports serving more than 130,000 campers already in 2022. Yet, despite such solid and steady growth, the mission remains the same: To connect passionate coaches with young athletes to facilitate athletic and personal development in a positive and safe environment. For more information on becoming a part of Nike Tennis Camps or US Sports Camps, visit sportscampcoaches.com/tennis. Follow US Sports Camps on Facebook, Twitter, Instagram, and USSportsCamps.com.