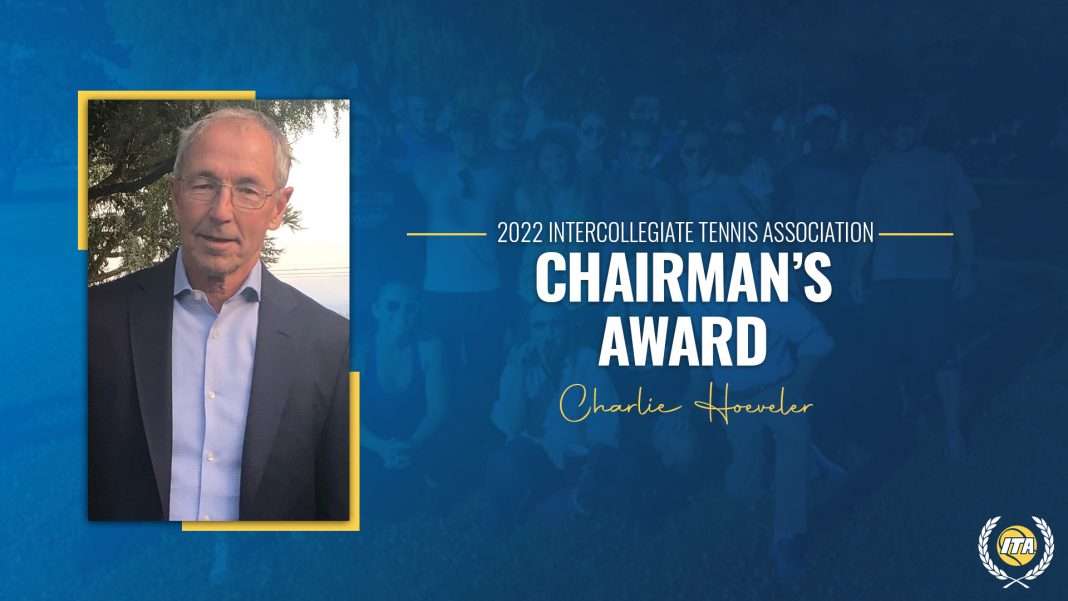 TEMPE, AZ – The Intercollegiate Tennis Association (“ITA”) is pleased to announce Charlie Hoeveler, the founder of US Sports Camps, as the inaugural recipient of the ITA Chairman’s Award.

The ITA Chairman’s Award recognizes and honors an individual who has provided lifelong service to our sport, including, but not limited to, innovation across the college tennis landscape in support of coaches, varsity programs, colleges and universities, and student-athletes. The award winner serves as an inspiration to how graduating college students may find and create meaningful careers in tennis and tennis-related industries.

“What an absolute delight it is to celebrate the legacy of one of the great people in the world of tennis,” said ITA Chief Executive Officer Dr. Timothy Russell.  “For decades, college tennis has helped develop championship human beings on and off the court and leaders in our sport and across our country.  Charlie Hoeveler has been all these things and much more for a very long time, a model for so many people to admire.”

Charlie took up tennis at the age of 12 in Connecticut where he grew up. He got very good quickly, competing in junior tournaments around New England in the 1950s and 1960s before heading to Dartmouth College after graduating from the Salisbury School.

At Dartmouth, Charlie played for four years and captained the team in 1966 and 1967, battling successfully against number one players from various Ivy League schools, including the ITA’s own David A Benjamin.

After college, Charlie moved to California where he embarked upon an amazing post-college amateur competitive tennis career which is still ongoing to this day.

Charlie has won an astounding 52 USTA Gold Balls, including 27 Father/Son Championships, he has been ranked number one in his age group on three separate occasions, and he has inspired many players along the way, including his sons Charles and Justin who each went on to play college tennis.

In 1975 Charlie and some partners took over Tennis America from Billie Jean King and Dennis Van Der Meer and launched what is now US Sports Camps, which is the largest camp company in the world. Then in 1993, Charlie and Ian Hamilton formed a partnership with Nike. Today, there are countless Nike Sports Camps held each year which offer boys and girls, as well as adults, opportunities to hone their skills in more than 18 sports.

“On behalf of all the employees of US Sports Camps, the coaches and directors of our Nike Tennis and Sports Camps nationwide, and most importantly, the hundreds of thousands of campers who have been introduced to tennis, the sport of a lifetime, we want to congratulate the founder of US Sports Camps Charlie Hoeveler, for being the recipient of the inaugural Chairman’s Award from the ITA,” states Ian Hamilton, Global Vice President of Partnerships at US Sports Camps. “We at US Sports Camps are grateful for this opportunity to honor our founder and friend.  From the first days of US Sports Camp’s existence, Charlie has dedicated himself to building a camp company that focused on skill development, new friendships, and above all having fun. Job well done Charlie!”

The Nike Tennis Camp business is the “jewel in the crown“ of the US Sports Camp enterprise as far as Charlie is concerned. In nearly 50 years since Charlie ran the first tennis camps at Squaw Valley, Nike Tennis Camps have had over 500,000 boys and girls in attendance. Most camps take place on college campuses and are directed by college coaches around the United States.

The exact number of those boys and girls who went on to play college tennis is anyone’s guess, but one can safely assume the number is in the tens of thousands. Meanwhile, here at the ITA, we have seen firsthand how hundreds of college coaches have benefited greatly by working in the summers as Nike Tennis Camp directors.