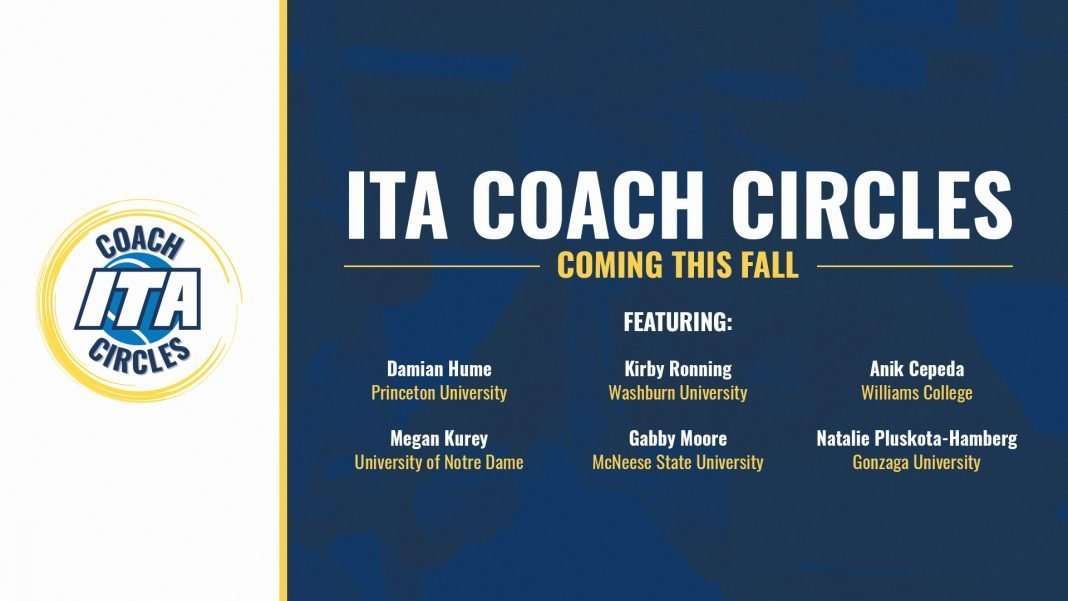 The Intercollegiate Tennis Association (“ITA”) is pleased to announce a new coach education initiative titled, Coach Circles, which is being offered by the ITA Center for Coach Education and is available to all ITA member coaches from all divisions.

Coach Circles are coach-led, informal groups designed to provide member coaches who share common interests an opportunity to come together, share best practices, and discuss topics important to them. Circles are a great way to engage, expand networks, and enhance professional development.

Any coach can join as many different Circles as they choose and attendance is optional. Zoom calls will take place roughly every other month.

Below is the schedule for the first three Coach Circles to be offered, if you have any questions on the Coach Circles program please contact Danielle McNamara at dmcnamara@itatennis.com:

A South African native, Hume spent two summers as an assistant pro at the Country Club of New Canaan in Connecticut before returning to Boise State as an assistant coach in the fall of 2013. Hume joined the Michigan State staff in January 2014 and helped the doubles pair of Harry Jadun and John Patrick Mullane win three matches at the 2015 NCAA doubles tournament and earn All-America honors with their semifinal run. Hume joined Princeton in the Fall of 2015 and is now the Men’s Associate Head Coach.

Megan Kurey was named the assistant coach of the Notre Dame Women’s Tennis program on June 11, 2019, having completed an All-American career at Georgia Tech and coaching at Kansas State. In 2021, Kurey helped guide her student-athletes to five ITA Scholar-Athlete awards and an All-ACC Academic Team selection. In 2021, the Irish finished at 11-13. Before the COVID-19 pandemic ended her first season with the Irish early with an 11-5 record, Silverio earned a signature win over No. 20 Southern Cal at the College Match Day.

Kirby Ronning will head into his third season as the Washburn head tennis coach for the Ichabod men’s and women’s programs in 2022-23 after being named to the position on July 23, 2020. He has led both the men’s and women’s programs to the NCAA Tournament in each of his two seasons at Washburn. He has a 33-15 record when coaching the women and 28-11 record on the men’s side. Prior to accepting the head coaching position at Washburn, Ronning spent four seasons as the assistant coach at Azusa Pacific from 2016-2020.

Gabrielle Moore, a Southwest Conference and HBCU National Champion tennis coach, was named the McNeese Head Coach in 2022. Moore, the 2022 SWAC Coach of the Year, has spent the last five seasons as both the men’s and women’s head coach at Jackson State where she guided the Lady Tigers to a SWAC championship and NCAA Tournament berth this past season. In addition, the men’s team finished second in the league standings and advanced to the championship of the SWAC Tournament.

Natalie Pluskota-Hamberg is entering her first year as the head coach for the Gonzaga women’s tennis team. She was recently the assistant for GU for four years after returning to Spokane following a one-year stint at Arkansas in 2018-19. In college at the University of Tennessee, Pluskota-Hamberg earned four All-America honors, being recognized for her doubles play in 2009, 2010, and 2012, and singles play in 2012. She reached three NCAA Doubles Tournament semifinals, reaching the championship match in 2010.