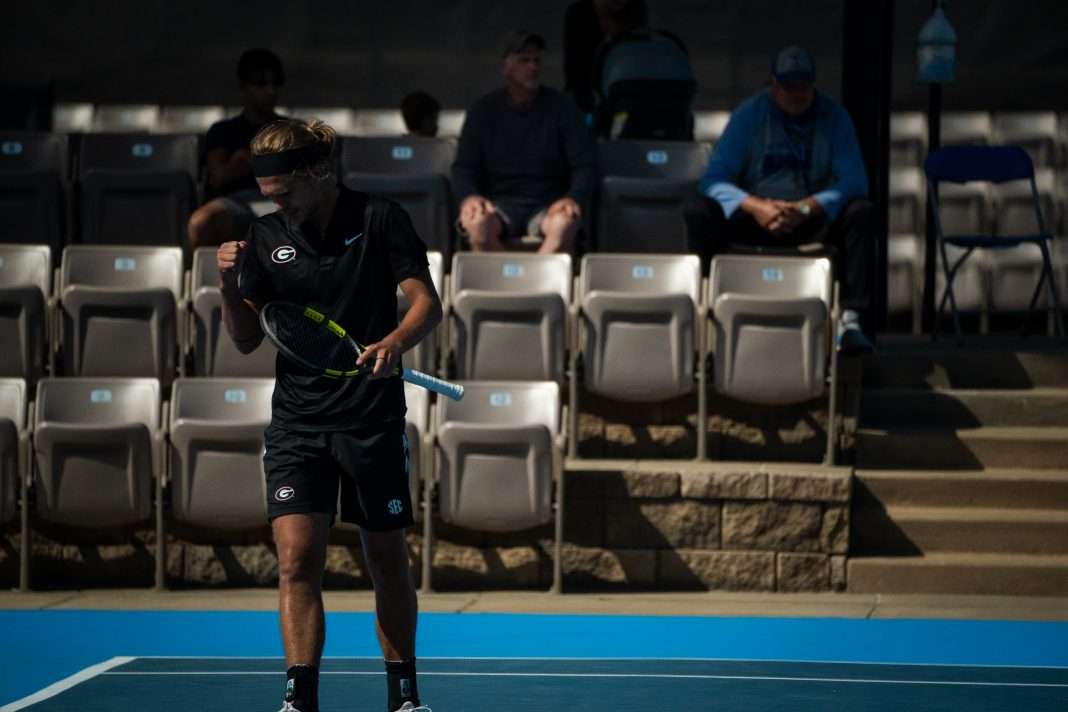 The 2022 Men’s All-American is set to be one for the history books as we have two teammates in the singles final for the first time since 1996 (!) Our doubles draw also welcomes a program for the first time to the championship match.

In singles, we saw Georgia send two of the remaining four players into the semifinal matches, with Ethan Quinn going up against Eliot Spizzirri (Texas), and Philip Henning against Max Basing (Stanford). Matches started off in tight fashion with 7-5 first set victories going in the way of Quinn and Basing. Ethan Quinn would keep the pressure going, rallying off a decisive 6-1 second set dagger to give the freshman his first appearance in the All-American Championship match. Philip Henning, the Georgia senior, had not lost the first set of his main draw matches all tournament until today, but he did not let that hold him back. Henning would go on to win the second set with 2 straight games at 4-4. In the third and decisive set, Henning would race out to a quick 5-1 lead, eventually taking the match with a final set score of 6-3.

This will be the fourth time a school has had two players in the ITA All-American Singles Final (UCLA, 1981; Texas, 1993; Mississippi State, 1996). This will also be the first time since 2007 that Georgia will crown one of its players as the Singles Champion (Travis Helgeson, 2007).

In Doubles, Brian Cernoch/Ryan Seggerman (UNC) faced off against the freshmen duo of Tanapatt Nirundorn/Togan Tokac (Florida) while Toby Samuel/Connor Thomson (South Carolina) were pitted against Cleeve Harper/Eliot Spizzirri (Texas). Samuel/Thomson looked in focused form as they found themselves with a first set lead after a 6-2 performance. Having only lost one set on their way to the semifinal matchup, Samuel/Thomson looked to keep it that way as they managed to hold on to their break and lead in the second set. South Carolina would hold for the set at 5-4 and book their trip to the Finals with a 6-4 second set victory. On the opposite side of the draw, we saw UNC and Florida battle their way through a contested first set, but leaning towards the way of Cernoch/Seggerman, 7-5. UNC showed poise as they would not lose their lead of the set on their way to a 6-4 final set victory.

This will be the first time in South Carolina history that a team will represent them in the Doubles Championship match. UNC, however, will tie for the second most program appearances in the doubles championship match (4) with this effort.

Final toss is at 10 am (CT) Sunday from the Michael D. Case Tennis Center here in Tulsa, Oklahoma. Championship matches can be tracked or streamed through the Cracked Racquets CrossCourt Cast, or live streamed courts here.