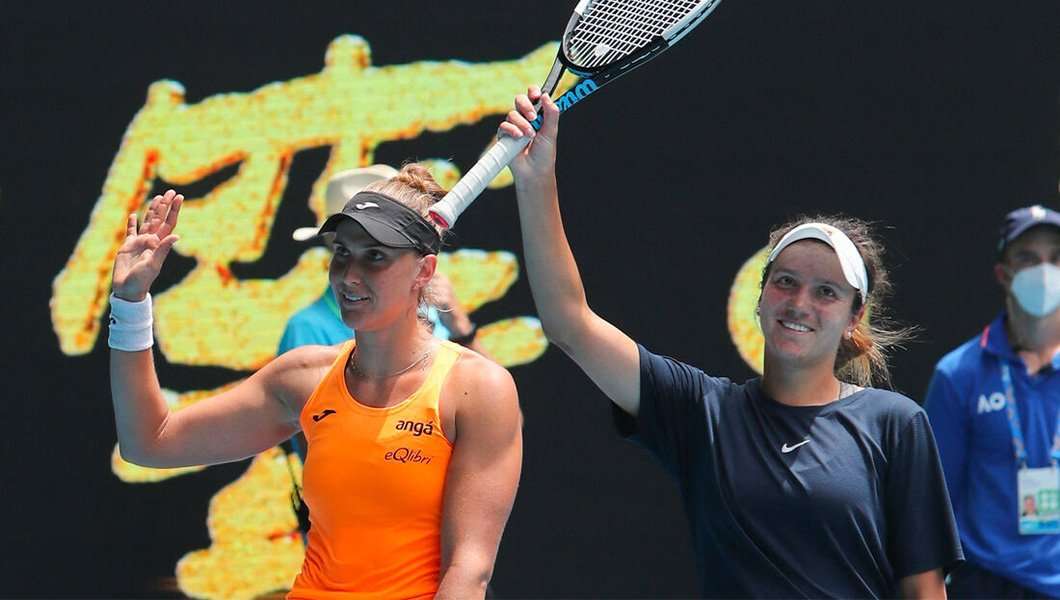 In what serves as the Women’s World Cup of professional tennis, the Billie Jean King Cup has seen over 118 countries compete in competitions across all of 2022 with numerous collegiate alum making up rosters from their home nations across the world.

Across the 12 teams competing in Glasgow this week, six players will have ties to collegiate tennis having all played at least two years at a college or university before turning pro.

First, on team Great Britain, Northwestern Alum, Alicia Barnett, gets the call to compete in the most premiere nation-based tournament in all professional tennis after reaching new heights in her professional career this past year.

Ranked No. 60 in the world in doubles, Barnett won her first WTA Finals this past August and has continued to be one of the fastest-rising stars in Women’s Doubles.

Representing Spain is former Oklahoma State and Florida Atlantic standout, Aliona Bolsova. Bolsova since turning pro after the 2018 season, has found great success in both Singles and Doubles on Tour, ranking Top-200 in Singles and Top-60 in Doubles currently.

Danielle Collins will get her chance to represent the United States at the 2022 Billy Jean King Cup Finals. The two-time NCAA Singles Champion and three-time ITA Champion will look to continue to leave her impact on the professional tour after flourishing in numerous tournaments this past year.

Rising to a career-high WTA Singles Ranking of No. 7 earlier this season, Collins had a Runner-Up finish at the Australian Open in 2022 and currently ranks as the No. 14 ranked singles player in the world.

Former Florida great Anna Danilina will be competing for her home country of Kazakhstan during this year’s Tournament. The doubles specialist on tour has built a successful professional career after finishing as a four-time ITA All-American while at Florida.

Currently sitting as the No. 11 Ranked Doubles player in the world, Danilina has won two WTA Doubles Titles this year and had a runner-up finish in Women’s Doubles at the 2022 Australian Open.

As a five-time ITA All-American in college, Georgia’s Ellen Perez will make her appearance for her country at the Billie Jean King Cup, competing for her home country of Australia.

Winning two WTA Doubles Titles in 2022, Perez is currently ranked as the No. 20 Ranked Doubles player in the world, while reaching a career best ranking of No. 15 just a few months ago.

For former Stanford standout Carol Zhao, she will get the opportunity to represent Canada at the 2022 Billie Jean King Cup after showing impressive growth in her singles game over this past season.

The three-time ITA All-American at Stanford has nearly climbed back into the Top 150 of the WTA Singles Rankings for the first time since 2018 after some impressive results on Tour this year.

Play from the 2022 Billie Jean King Cup Finals will run through November 13th in Glasgow. Group play is set to conclude on Friday, November 11th before the Semifinals begin on the 12th and the Finals on the 13th.

Alicia Barnett, Northwestern: Played all four years of her collegiate career at Northwestern where she would be named an All-Big Ten selection her final three seasons. Barnett posted a career 83-49 doubles record while with the Wildcats from primarily the No. 1 and No. 2 doubles positions. Compiled numerous ranked wins while with Northwestern, and helped lead the Wildcats to multiple NCAA Tournament appearances.

Aliona Bolsova, FAU/Oklahoma State: Played two years collegiately at both Oklahoma State and Florida Atlantic. In her final season of play in 2017-18, Bolsolva went 19-0 in singles play for the Owls and ranked as high as No. 2 in the ITA Singles National Rankings. Bolsolva was an All-Big 12 and All-Conference USA selection, including being named the C-USA Player of the Year in the spring of 2018.

Danielle Collins, Florida/Virginia: A two-time NCAA Singles Champion, Collins had one of the most decorated collegiate careers by a student-athlete over her three years at Virginia and one year at Florida. Collins was a three-time ITA Singles All-American and posted 125 career singles wins during her time at both Florida and Virginia. In her senior year, Collins was named the ITA Senior Player of the Year and finished her career ranked as the No. 1 Singles player in the country.

Anna Danilina, Florida: As a three-year player for Florida, Danilina put together an impressive collegiate resume, finishing her career as a four-time ITA All-American and earning All-SEC selections each year with the Gators. Compiling a 31-7 overall doubles record and a 97-28 overall singles record at Florida, Danilina played in both the NCAA Singles and Doubles Championships during her final two seasons with the Gators.

Ellen Perez, Georgia: With the Bulldogs, Perez was a five-time ITA All-American selection in just three years of play. Perez ranked within the top five of both the Singles and Doubles ITA National Rankings during her time at Georgia. Overall, Perez finished her collegiate career with a 63-27 singles record and a 56-32 doubles record.

Carol Zhao, Stanford: Spending three years with the Cardinal, Zhao was a three-time ITA All-American selection while at Stanford, earning two selections for singles and one for doubles. In the spring of 2015, Zhao was the NCAA Singles runner-up, falling to Jamie Loeb of North Carolina in the Championship match. Over her entire career with Stanford, Zhao went 51-8 in singles and 39-11 in doubles from the top half of both lineups.