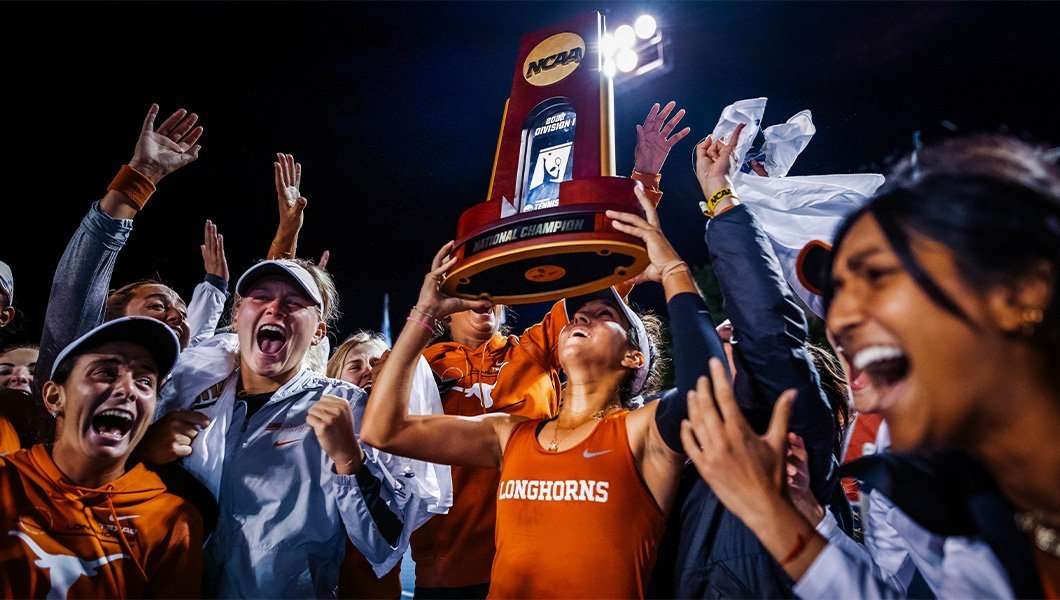 Losing half of its lineup from the 2021 NCAA National Champion team, Texas had to establish a new identity in 2022 which proved to be quite the hurdle for the Longhorns and Head Coach Howard Joffe to start the dual-match season.

Jumping out to a quick 6-0 record, Texas had things running at full speed from their first serve of the season. However, after picking up three losses over their next four matches, the Longhorns quickly found themselves with a 7-3 record and at a fork in the road that could either make or break the season.

Not phased by the pressure, Texas responded to the adversity by winning their next three matches over Top-35 ranked opponents, which kickstarted a run of seven consecutive wins for the Longhorns to get them back on track for a deep postseason run.

Finishing the regular season second in the Big-12 Conference, Texas began their astounding postseason run in the conference tournament where they beat three Top-35 opponents to win their second-consecutive conference title. This included a win over the No. 2 ranked Oklahoma Sooners who the Longhorns had already lost to twice on the year and who they would face again in the biggest match of the year just a few week later.

Seeded as the No. 4 seed nationally in the NCAA Tournament, the Longhorns were set to host Michigan (No. 18), Oregon, and Ball State in Austin for the Opening Round of play, with Texas facing off with Ball State to get NCAA play underway.

Winning 4-0 over Ball State, Texas was now set for a date with the Wolverines, who like the Longhorns were peaking at the right time, winning the Big-10 Championship and 15 of their past 16 matches. Ready for the challenge, Texas would go on to sweep Michigan to advance to the Super Regionals of the 2022 NCAA Championship where they would host Auburn (No. 14).

In a similar dominance and swiftness that the Longhorns handled Michigan in the round prior, Texas would take down Auburn 4-1 in the Super Regionals to earn their spot into the Elite Eight and a trip to Champaign, Illinois where the best of the best would meet.

With a matchup with No. 5 seeded Virginia in the Elite Eight, the Longhorns would get out to a fast start, winning the lone doubles point, before having to rely on the back half of the lineup to secure the win after Stearns and Collins fell from the top two spots.

Surviving now to reach the Final Four, Texas was now set to face top-seed North Carolina who took home the 2022 ITA National Team Indoor Championship and were winners of 28 of their previous 30 matches on the season.

Picking up a big win from the No. 1 doubles position, the Longhorns were able to jump out to a quick lead after doubles, winning from the top two spots in the lineup.

In singles, Texas needed to keep the momentum rolling as the Tar Heels quickly took a point from the No. 4 spot, before the Longhorns swiftly shut the door, earning victories from the No. 1, No. 3, and No. 5 positions to earn their spot into the NCAA National Championship.

From doubles, Texas earned quick victories from the No. 2 and No. 3 positions to clinch the doubles point for the third time this season over the Sooners.

Moving to singles, Oklahoma would earn their only point of the Championship match from the No. 6 position before the Longhorns won on courts No. 1, No. 3, and finally No. 5 to secure back-to-back National Championships.

The win marked twelve straight victories to end the season for Texas as they would finish the season with a 26-4 overall record, including wins in 19 of their final 20 matches.

In 2023, the Longhorns will look to become the first team to win three-straight NCAA Championships since Stanford did so in 2004-06. Texas will once again need to establish a new identity as half of their Championship lineup in 2022 has departed, including their top-two players in Peyton Stearns and Kylie Collins.