ITA #WeAreCollegeTennis
Home After College A Star Is Born: From the Bottom of the Lineup to the... 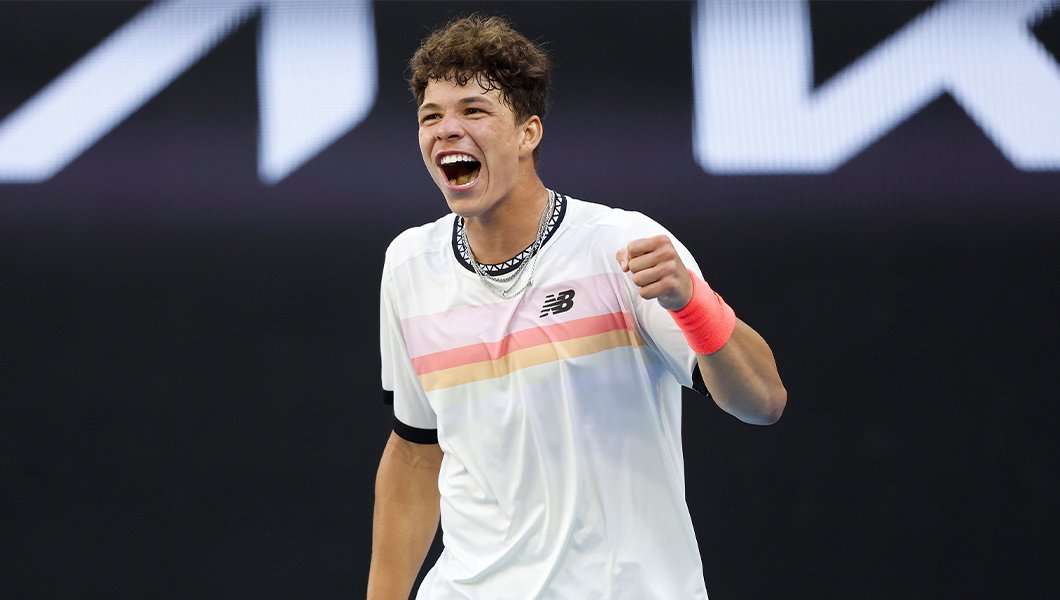 Melbourne, Australia – As the world turns its sights to Australia for the first Grand Slam of the 2023 season, it is the 2022 ITA National Player of the Year, Ben Shelton, who is stealing all of the headlines after his historic run to the Quarterfinals of the Men’s Singles Main Draw.

Now just two wins away from the Finals of his first-ever Australian Open, Shelton is proving to the world that college tennis does have a major impact on the development of players and prepares them for the biggest and brightest stages.

Coming into college as the No. 4 ranked player in the class of 2021, Shelton’s collegiate journey began from the No. 5 position in the Florida Gators lineup where he had to prove himself week in and week out against the very tough SEC schedule.

Finishing 21-4 over his freshman campaign, Shelton’s rise to stardom began at the 2021 NCAA Championships where he clinched Florida’s first-ever NCAA title in program history with a win over Baylor’s Charlie Broom at No. 5.

Holding an ATP Singles Ranking in the 1000s at the end of his first collegiate season, Shelton made the decision to continue to develop his game and return to Florida for his sophomore season which would prove to pay huge dividends for his career.

After working on his game throughout the off-season, Shelton began the fall by winning the 2021 ITA Men’s All-American Singles Championship and then claiming his first professional title at the 25K in Champaign, IL to improve his ATP Singles Ranking all the way up to 573 at the end of 2021.

Entering the spring of 2022 as the No. 2 ranked singles player in the ITA Collegiate Tennis Rankings, Shelton was now battling for the top spot in the singles lineup for the Gators who came into the season with high hopes of repeating as NCAA National Champions.

After leading the Gators to the Quarterfinals of the 2022 NCAA Team Championship before falling to eventual National Champion Virginia, Shelton set his sights on the NCAA Singles Championship where he entered as the top seed looking to cement his collegiate legacy.

Winning in straight sets all the way through the quarters, Shelton beat Tennessee’s Adam Walton 6-7(3), 6-3, 7-5 in the Semifinals to advance to the final.  Against San Diego’s August Holmgren, Shelton rallied to earn the 2022 NCAA Singles Championship, winning 4-6, 6-3, 6-2 over the #6 seed.

Deciding to test the waters of the professional game after this huge improvement throughout the 2021-22 season, Shelton would immediately make his presence felt, competing in several ATP Tour events across the United States.

Reaching the Finals in the ATP Challenger Tournaments in Rome, Ga., and Chicago, Ill., Shelton’s next career milestone came at the Western and Southern Open where he would not only earn his first Top 100 win but Top 10 win as well, beating ATP No. 5 Casper Ruud 6-3, 6-3 in Cincinnati.

Jumping up to No. 171 in the ATP Singles Rankings after the Western and Southern, Shelton decided to officially turn pro just before the 2022 US Open and he hasn’t looked back.

Winning three straight ATP Challenger Tour events to finish 2022, Shelton earned automatic entry into the 2023 Australian Open and broke into the Top 100 of the ATP Singles Rankings, moving up more than 400 spots since the end of the 2022 college dual-match season.

Traveling outside the United States for the first time in his career, Shelton came into the Australian Open under the radar but quickly showed his top-level talent by winning his first three Grand Slam matches.

Now in the fourth round, Shelton faced off with fellow collegiate great, JJ Wolf (Ohio State), for a battle between two players looking for their first Grand Slam Quarterfinal appearance.

These results at the Australian Open make Shelton the first NCAA Men’s Singles Champion to make the following year’s Australian Open Quarterfinal since Arthur Ashe in 1966 and the first American man in 20 years to reach a major quarterfinal before turning 21 since Andy Roddick.

Shelton will look to continue to make history later tonight, Tuesday, Jan. 24, when he takes on fellow American, Tommy Paul, in the Quarterfinals. The match will take place on Rod Laver Arena, not before 10:30 pm (ET), and can be watched on ESPN2 or ESPN+.