The word compete derives from Latin, meaning “to strive together.” College tennis competition needs to be just that… players, coaches, and officials striving together to create an environment whereby outstanding tennis technique, strategy, tactics, and sportsmanship combine in a noble contest. 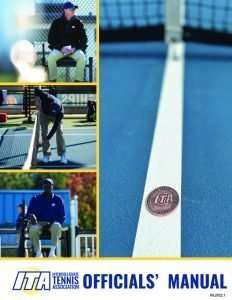 If you need to verify the certification of an ITA official, please make your request using our contact form.

To become an ITA Official you must currently have a USTA certification of Foundation 2 or above, which is reflected in OfficialsFirst. Your local USTA office can provide you with the steps to becoming a USTA certified official. Additional training and certification to become an ITA Official consist of taking an open book test and attending an interactive webinar taught by a live instructor. There is also an annual $60 membership fee. To begin the process, just send us a message using our contact form.

Ejection of a Coach or Player

This form is to be used in any instance that a coach or player is ejected from the facility at an ITA sanctioned event. If a player has defaulted, please see the Default of a Player form. Ejection of a Coach or Player form →

Default of a Player

This form is to be used any time the Referee has to default a player from an ITA sanctioned event (whether it was through the PPS or an immediate default for particularly egregious behavior). Default of a Player form →

Ethics Complaint Against an Official

This form is to be used to report any inappropriate conduct by an official, whether it is for on or off the court behavior. Ethics Complaint Against an Official form →

Report of an Official

This form is to be used whenever an official did not apply ITA rules correctly to a match during an ITA sanctioned event. This report is to be used when the decision made did not directly affect the outcome of the match. Report of an Official form →

Grievance Against an Official

This form is to be used whenever an official did not apply ITA rules correctly and their decision directly affected the outcome of the match. Grievance Against an Official form →

ITA Tennis - December 3, 2022
Honfleur, France - Up against the host nation at the 2022 Master'U BNP Paribas Championships, Team USA had to show lots of resilience and...