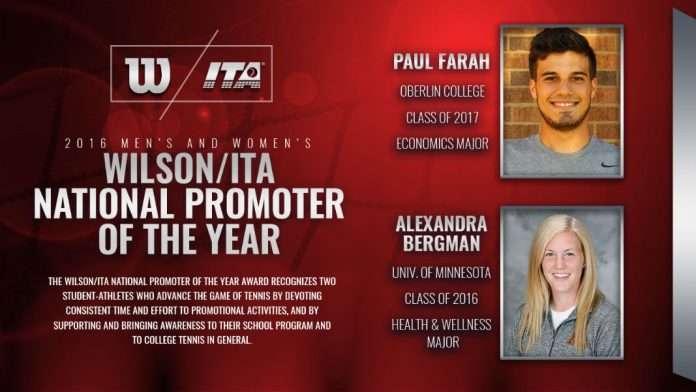 TEMPE, Ariz. (May 6) – Wilson and the Intercollegiate Tennis Association announced the 2016 Wilson/ITA National Promoter of the Year Award winners on Thursday, June 2, 2016. Alexandra Bergman of the University of Minnesota and Paul Farah of Oberlin College will receive a paid summer internship to work at Wilson’s global headquarters in Chicago, Illinois, in its Grassroots Marketing department.

“We are ready for a blockbuster summer with the addition of Alexandra and Paul to our already strong Wilson Team,” said Tim Buwick, U.S. Promotions Director for Wilson Sporting Goods Racquet Sports Division. “The competition was strong, so it is quite an honor to be selected as the 2016 Wilson/ITA Promoter of the Year Award recipients. We have a long list of people who have used this opportunity as a springboard to a long career with Wilson and/or the tennis industry. We are looking forward to welcoming these two talented individuals to our global headquarters in Chicago.”

Each year, the Wilson/ITA National Promoter of the Year Award recognizes two student-athletes who advance the game of tennis by devoting consistent time and effort to promotional activities, and by supporting and bringing awareness to their school program and to college tennis in general.

Bergman and Farah will assist with the day-to-day projects for the entire Grassroots and Marketing team. Interns will have an opportunity to work and experience all the different facets of Wilson Racquet Sports from tennis balls, racquets (performance and recreational), promotions/marketing, U.S. tour, indoor (racquetball, squash, badminton and paddle), accessories and apparel/footwear.

“The mission of the ITA is to serve college tennis and return the leaders of tomorrow,” said Timothy Russell, Chief Executive Officer for the ITA. “Alexandra and Paul are shining examples of student-athletes that have gone above and beyond the call of duty, and I’m very pleased that Wilson selected both to spend the summer at its global headquarters in Chicago, to take part in an extraordinary internship opportunity.”

Bergman, who graduated from the University of Minnesota in May with a bachelor’s in health and wellness, worked with her university’s social media and marketing departments in 2015-16 to help increase awareness around the Gophers’ women’s tennis team.

“I’m extremely excited about the opportunity to work with Wilson and the Grassroots Marketing team,” said Bergman, who resides in Winnetka, Illinois. “I know I want to work in the sports industry, and that’s a huge reason why I applied for this internship. I’m looking forward to learning a lot from the talented staff at Wilson.”

Bergman helped start the Minnesota tennis mini-feature videos, where she’d interview a teammate and the content was posted to the team’s social media channels.

“It was a good way for the fans to get to know the players on a more personal level,” said Bergman. “I had a lot of fun doing it.”

Farah is an economics major at Oberlin College, and will graduate in 2017. He’s interned for the USTA on both the national and regional level.

“I was a little surprised I was picked because the field was very competitive, but I was definitely happy to hear from Wilson and it’s truly an honor to be selected by them.”

Farah has been active in his community, working with the CAS Project in his hometown of Flint, Michigan, which paired with Physical Education programs to teach tennis to inner-city children. He was also instrumental in building up the tennis program at the Flint Southwestern Classical Academy.

“Tennis has been a big part of my family for a long time,” said Farah. “My dad does work for the USTA Midwest Committees and so does my brother. I think that’s where I got the idea to start making a difference in the community; it’s part of the family tradition. When I was in high school, there wasn’t much of a tennis team to speak of, so I just wanted to get more people interested and by the team it was my senior year, we had a full team. I feel like I can do the same thing for other people.”

At Oberlin, Farah can be found spreading the word about his men’s tennis team on campus, and he’s also getting involved in the local community, spending time working with the “Buddy Up Tennis”, which helps teach tennis to children with special needs and Down Syndrome.

“It’s nice to see people enjoy the sport of tennis and be active,” said Farah. “Tennis isn’t a sport for a specific person, it’s for people of all ages and no one should ever be excluded. Seeing people having a good time is what it’s all about.”

Both Bergman and Farah had some advice for student-athletes looking to get more involved with their team’s promotional efforts.

“Use your resources on campus,” said Bergman. “People are always willing to work with you, especially if you show an interest in what they are doing.”

Added Farah: “Show your support to the other teams on campus; you can’t just expect people to come out to your matches if you’re not doing the same for the other sports. Attending events outside of your sport creates a tighter bond with those teams and a better community environment.”

About the ITA
The Intercollegiate Tennis Association (ITA) is the governing body of college tennis, overseeing women’s and men’s varsity tennis at NCAA Divisions I, II and III, NAIA and Junior/Community College. The ITA administers a comprehensive awards and rankings program for men’s and women’s varsity players, coaches and teams in all divisions, providing recognition for their accomplishments on and off the court. For more information on the ITA, visit the ITA website at www.itatennis.com, like the ITA on Facebook or follow @ITAtennis on Twitter.