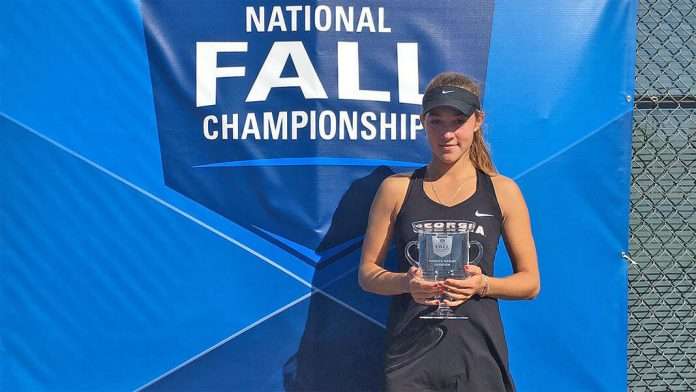 SURPRISE, Ariz. – To the champ goes the cheesecake.

Georgia’s Katarina Jokic can indulge all she wants after her performance on Sunday in the women’s singles final at the 2018 Oracle ITA National Fall Championships at the Surprise Tennis & Racquet Complex in Surprise, Arizona.

The No. 9-seeded sophomore battled past a tough No. 11 Kate Fahey of Michigan 6-3, 7-5 to take home the final prize of the fall portion of the collegiate tennis season.

Jokic commented during the post-match trophy presentation that a stop by the Cheesecake Factory may be in order before returning to Athens, Georgia.

In the men’s final, top-seeded Petros Chrysochos rallied from a 5-1 deficit in the second set to win the last six games and claim the championship a year after he lost in the final, topping No. 6 Daniel Cukierman of USC 6-4, 7-5.
The No. 1-ranked Chrysochos now has a singles and doubles Oracle ITA National Fall Championships title, as he won the 2017 doubles championship with Skander Mansouri.

Jokic and Chrysochos receive a main draw wildcard into a 2019 Oracle Challenger Series tournament by virtue of their victories in Surprise.

Michigan’s Chiara Lommer and Stanford’s Emily Arbuthnott met in the women’s singles consolation final. Arbuthnott rallied from a set down to win in three sets 4-6, 6-4, 6-2.