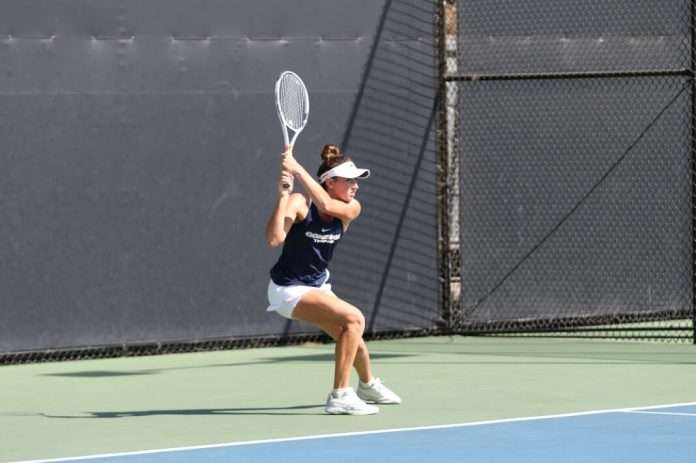 PACIFIC PALISADES, Calif. – Gonzaga University senior Sophie Whittle finished a five-minute stretch and headed out for a jog around the outer courts Friday after her sixth singles win in four days at the 2018 Riviera ITA Women’s All-American Championships.

Gonzaga head women’s tennis coach D.J. Gurule watched and shook his head in amazement at what the qualifier Whittle has accomplished since Tuesday in becoming the first Bulldogs players to reach the main draw in any ITA National Championship event.

“I feel OK,” said Whittle, letting out a huge smile minutes after her win, who has now played a total of eight matches since Tuesday with two losses in doubles. “I’m tired, but excited to be here and playing like this.”

Just a week ago, Whittle was playing in the main draw of a USTA Pro Circuit $60,000 tournament as a wild-card entry near her hometown in the Central Coast Pro Tennis Open 200 miles north of Pacific Palisades when she fell to former Wimbledon Junior singles finalist Anne Li.

“It’s just so different than last week,” said Whittle, who opened with a 4-0 lead against Southern California resident Chen and never looked back. “Just being here with my doubles partner and my coach and last week I was just on my own.”

On the next court over from Whittle was Chen’s new Blue Devils’ teammate freshman Maria Mateas, who is kicking off her college career this week and is currently ranked No. 311 in the WTA World Tour rankings. Like Whittle, Mateas also played in the main draw of last week’s USTA Pro Circuit tournament on the Central Coast falling 7-6 in a third set in the first round.

“This is a different vibe for me in general,” said Mateas, after beating one of her best friends from the juniors and fellow Massachusetts resident Emma Davis of Wake Forest, 6-4, 6-0. “I’ve been playing mostly on the pro tour for the past two years, so I definitely have expectations. But everyone is so good here too.”

And that would include Matteas’ semifinal opponent and top-seeded Makenna Jones from the University of North Carolina as Jones looked impressive in beating No. 7-seeded Katarina Jokic of Georgia 6-1, 6-1 in her quarterfinal, but had a tougher time earlier in the day eliminating LSU’s Eden Richardson 7-6 (7), 7-5.

“It was a lot closer than the score,” said Contreras, a native of Mexico who spent her high school years training in Austin, Texas. “I was focusing on keeping my toss up on the serve because of the windy conditions. Last year was a grind when I beat her here in three sets.”

It was the fifth consecutive ITA national tournament where Contreras – the first Commodores player to win at Riviera – has gotten to the semifinals or better.

The doubles semifinals will move to a best-out-of-three set format on Saturday. A day after upsetting the top-seeded team, the University of Kansas duo of Nina Khmelnitckaia and Janet Koch advanced to the final four with an 8-6 win over the No. 6 Arizona State team of
Lauryn John-Baptiste and Ilze Hattingh. They next face Wichita State’s Fatima Bizhukova and Marta Bellucco after singles play concludes.

In the other semifinal, it will be the unseeded Stanford team of Caroline Lampl and Kimberly Yee facing the No. 7 seeded team of Sofia Blanco and Lisa Marie Rioux of Oklahoma State. The Cowgirl team got past the unseeded University of Kansas team of Anastasia Rychagova and Sonia Smagina, 8-3, while Lampl-Yee beat No. 5 seeds Eden Richardson and Jessica Golovin of LSU.