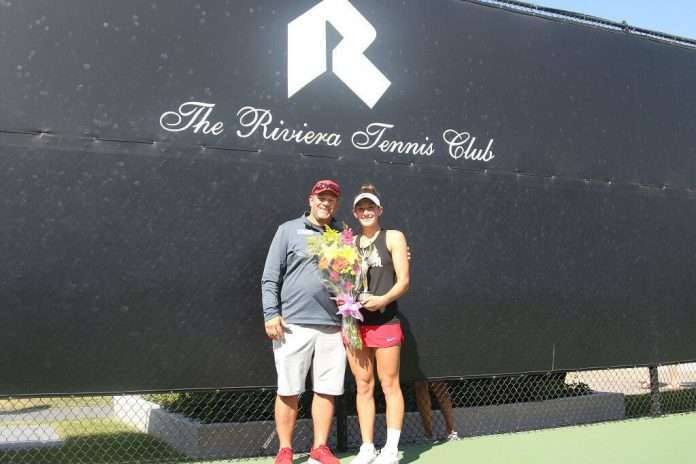 The victory for the recently turned 21-year-old Whittle from the Central Coast of California was her eighth consecutive win in six days as she became the second consecutive qualifier to win the ITA Women’s All-American singles title.

The drama-filled singles final was in jeopardy of being completed when up a set but down 2-3, 15-40 on Mateas’ serve, Whittle stepped wrong on the baseline at the end of a Mateas point and went down to the ground holding her left ankle.

“I was running for a ball and I rolled it and felt it hit the ground,” Whittle said. “I didn’t want to stop. This was not the match to pull out of. I wanted to win so bad. Whenever I get hurt they have to force me to not play.”

The trainer was summoned, and a 15-minute medical timeout ensued. Whittle’s ankle was taped and she limped back onto the court.

“When I looked into her eyes when I got over to her I thought she was done,” Gurule said. “I was trying to get her to calm down and take deep breaths. We talk a lot in our program about controlling the things you can control, and this was something we couldn’t control. We had to let the doctors do what they do. After she walked it off, I asked what she thought and she said, ‘There’s no way you’re pulling me off this court’.”

When play did finally resume, Mateas double-faulted for the eighth time in the match to knot the score at 3-3.

Mateas said the delay threw her off her game a bit, but she was still able to come back from down 4-5 and save two match points, tying the set at 5-all on a down-the-line forehand winner.

“I thought she was super hurt but then I saw that she was getting every ball back so I don’t know,” said Mateas, 19, who is ranked No. 311 in the WTA World Tour rankings and this past summer won her first ITF Pro Circuit Futures ($25,000) tournament. “I hope she’s fine but it didn’t look like she was super hurt after a while so I guess she’s good. It definitely deviated my focus a little bit, but that’s fine.”

Mateas, who was born in Romania and moved to New Jersey at age 6 and spent her formative junior tennis years in Massachusetts, was playing in her first college tournament and battled nerves with seven first-set double faults and a total of 10 in the match.

“My serve got me down a little bit, but I got it going near the end,”
said Mateas, the first Duke All-American finalist since Daniela Bercek in 2005. “My serve was not the problem. I just think she played a little bit better today.”

Mateas said once she split sets, she thought the match was hers. “One hundred percent,” she said. “But I was surprised at the level she was able to stay at for so long. I don’t think I did anything wrong. She was just better.”

Gurule joked that he might give Whittle an off day Monday.

“What she did out here was an amazing feat,” he said. “It’s just amazing. There’s really no other word for it. She’s just a beast. She’s passionate, she’s hard-headed. She’s everything you want in a player and a person. She’s the same way she is on the court than off.

“It’s a Cinderella story for sure. Gonzaga has that feeling. Gonzaga has this mentality that you just work hard. We don’t always have the blue-chip kids. We’re just going to out-work you and that’s what Sophie did today, and what’s she done the whole tournament. No matter where she was at mentally and physically.”

Gurule said the injury might have actually helped Whittle coming when it did in the match.

In the third set, Whittle broke Mateas’ serve for a 4-2 lead, and then came back down love-40 on her serve to get the hold for the 5-2 lead. After a Mateas hold, Whittle served out the match.

In the doubles final, the University of Kansas senior duo of Nina Khmelnitckaia and Janet Koch defeated Stanford’s Caroline Lampl and Kimberly Yee, 6-3, 6-2. The Jayhawks had two teams advance to the quarterfinals of the main draw and it was the first time in school history they had a team advance past the quarterfinal round at the All-American.

Khmelnitckaia and Koch won the Oracle ITA National Summer Championships Powered by UTR at TCU earning the spot in the main draw. Khmelnitckaia and Koch played their entire freshman year together but have had different partners the last two years before deciding this summer to player their senior year with each other.

“When we got the first break in the second set, we knew we had the confidence to close it out,” said Khmelnitckaia.

The University of Miami’s Estela Perez-Somarriba lived up to her top-seeding in the singles consolation bracket, taking the final over Sara Castellano of Wisconsin, 6-1, 6-4. In the doubles consolation final, Stanford’s Michaela Gordon and Emily Arbuthnott beat Megan Kauffman and Lauren Proctor of Winthrop University, 8-3.