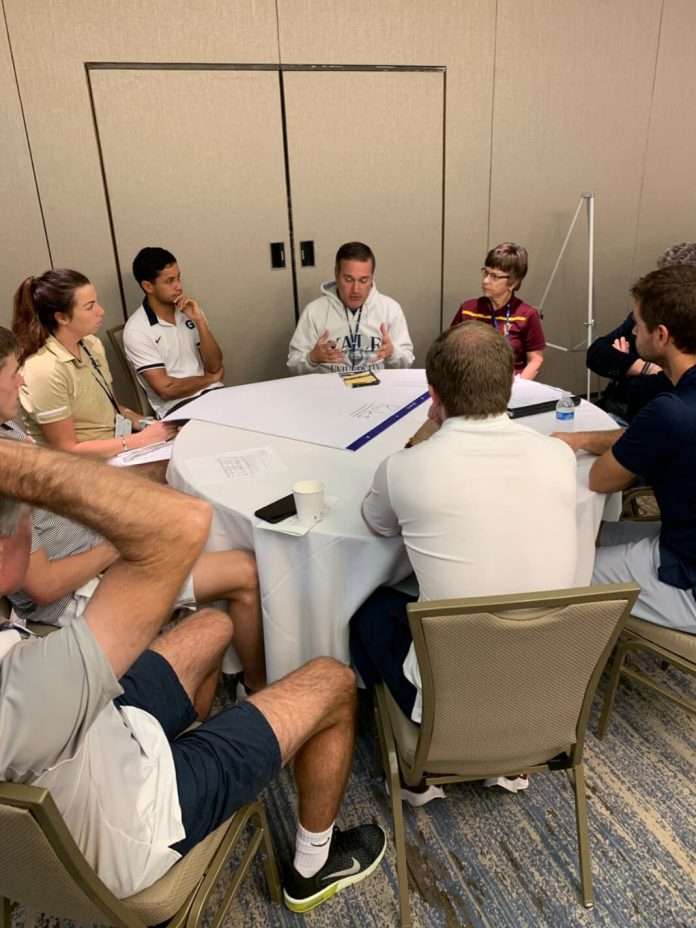 NAPLES, Fla. – Taylor Hollander always loves returning to her home state of Florida. But this weekend’s trip is even more meaningful for the Coral Springs native.

Hollander is attending her first ITA Coaches Convention. The Sacramento State women’s assistant spent hours going over the schedule of activities for the four-day event at the Naples Grande Beach Resort.

“I want to try to get to as many things as possible because they all look so interesting,” said Hollander, in her second season at Sacramento State. “I am really hoping to network and meet other coaches and find out if I am on the right track in terms of what direction I am heading in as a coach and how I am developing.”

UNC Greensboro men’s assistant coach Brian Ford has been wanting to attend the convention since he entered the coaching profession seven years ago. He finally got the chance this year.

“There are a ton of connections I am already making, and it is really important to me to be around the community conversations and get a feel for what is important to the collective,” said Ford, in his fourth season at UNCG. “The roundtable discussions we had were great. I wish we could have them for many more hours. There are some really important topics discussed that are going to revolutionize what we are capable of.”

Hollander, 26, received encouragement from Cami Hubbs, her head coach at Sacramento State, to attend the event and learn as much as possible.

“She really wanted me to come here. She wants me to get as much information as I can about coaching and wants me to grow as a coach,” Hollander sad. “She pushed me to get involved with the Alliance of Women’s Coaches as well. She’s been very supportive of my career.”

Hollander played for Cohen while attending the University of North Florida, where she graduated in 2015 with a degree in child psychology.

“I can call Audra any time I have a question or need to talk to someone,” said Hollander, a three-time scholar-athlete and all-conference selection at UNF. “She has always picked up the phone and given me advice. She usually tells me to stick with my gut when I’m making a decision.”

During her second week on the job at Queens in the fall of 2015, she was named the interim head coach when the head coach was let go.

“That’s kind of a crazy way to start your first job coaching. But honestly, that little rough patch turned out to be a great experience,” Hollander said. “I had to take over the men’s and women’s programs and develop the team until they found a head coach. Both programs won conference titles and it made it easier for me to jump to another program.”

During the UTR Welcome Cookout on Friday night, Hollander looked around the room and saw several head coaches she’s long admired. She received a text message from Veeder as she sat down to eat dinner.

“He wanted to make sure everything was going OK and told me I need to mingle and get to know people,” Hollander sad. “He said my first challenge is to meet his own boss, so I have to find Air Force coach Kim Gidley by the time I leave this convention.”

Award-worthy recognition
The 2018 Coaches of the Year were honored during the Wilson ITA Awards Luncheon on Saturday while Bill Richards of Ball State received the ITA Meritorious Service Award Presented by ConantLeadership.

Six of the 10 coaches were in attendance to pick up their trophies in person. The winners were:

Because the convention was canceled last year due to Hurricane Irma, last year’s Coaches of the Year and Meritorious Service Award winner, Cal men’s head coach Peter Wright, received a round of applause during Saturday’s lunch.

Learning to maximize fitness testing
The most popular afternoon session on Saturday was the on-court demonstration hosted by Mark Kovacs, a performance physiologist with an extensive background training and researching elite athletes.

Kovacs provided guidance for coaches to simplify fitness testing and better understand how to train each of their student-athletes.

Kovacs focused on baseline movements that can help players shift from neutral to offensive and defensive to neutral during points.

Kovacs will have a follow-up sessions indoors on Sunday to teach coaches how to understand and analyze movements with their players.