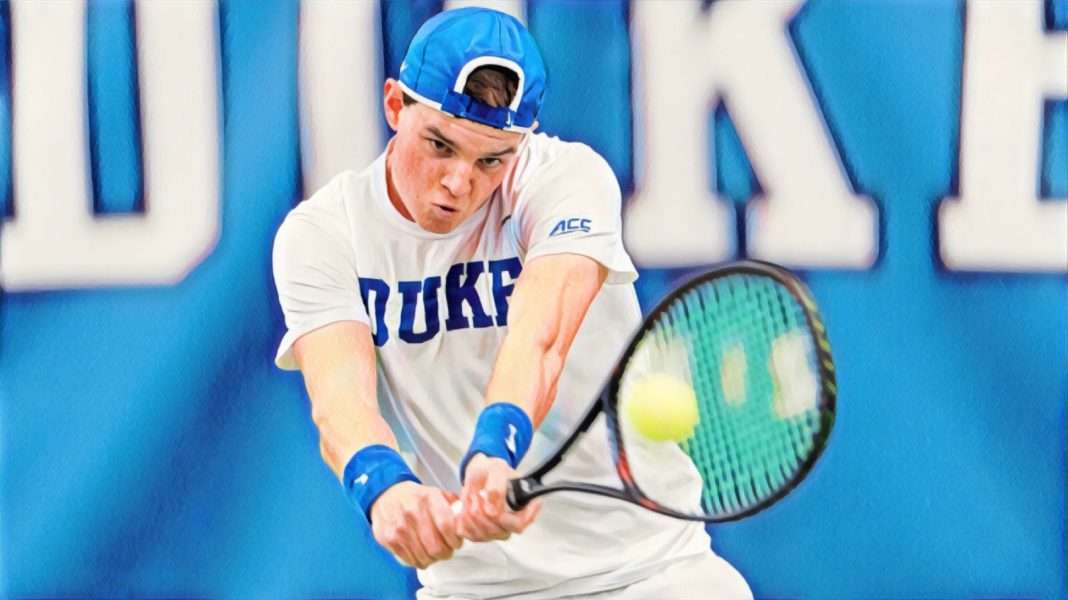 It’s the best time of year! College tennis is back and the first full weekend of college tennis did not disappoint.

With the ITA Kickoff scheduled for next weekend, many teams sought some competitive matches before the action heats up next weekend.

The Alabama Crimson Tide started their season off with a dramatic 4-3 win over 23rd ranked Michigan in Tuscaloosa.

The Tide won the doubles point with a pair of tiebreaks on courts 1 and 3. Zhe Zhou clinched the win for ‘Bama with two tiebreaks of his own over Michigan’s Gabe Tishman.

Duke pulled off an upset which could go down as one of the best comebacks of the season with a 4-3 dub over Arizona State.

ASU quickly went ahead 3-0 by winning the dubs point and straight set wins on courts 4 and 5. It looked like ASU was sitting pretty with five of six first sets in the bag.

The Blue Devils, however, clawed back with tremendous grit. Junior Spencer Furman got the clinch with a 5-7, 6-4, 6-4 win on court-2.

The east coast trip only got tougher for the ASU Sun Devils as they then traveled to Wake to take on the defending champs.

ASU raced out and took the dubs point over the ‘Deacs, but the champs responded well.

Freshman Siddhant Bhanthia picked up a quick 6-1, 6-2 win on 6 while Petros Chrysochos picked up right off where he left off last season with a 6-1, 6-3 victory on court-1.

Wake freshman Melios Efstathiou clinched the win for the ‘Deacs over Justin Roberts on court-3.

The 20th ranked Florida State Seminoles picked up a great 4-3 win over the Cal Bears on Sunday at the USTA National Campus.

The Bears were dominant in doubles. Sophomore Jacob Brumm picked up a 6-4, 6-3 win after Lucas Poullain got the ‘Noles their first point of the day on court-2, giving the Bears a 2-1 lead.

FSU improves to 7-0 after a big win over Cal! pic.twitter.com/8oKoldlEtg

The Vanderbilt Commodores took down the Northwestern Wildcats 5-2 on Saturday in a noteworthy battle between the BIG 10 and SEC.

The ‘Dores took the doubles point and then never looked back. George Harwell clinched the match on court-3 with a 7-6(5), 6-4 win.

The road trip did not get easier for Northwestern as the NC State Wolfpack took down the Wildcats 4-0 on Sunday.

The Wolf Pack won a quick doubles point and then three straight-set singles matches with Tadas Babelis clinching the win 4-0 on court-3 over Bratholm 7-5, 6-4.

Tulsa shocked TCU on Friday with a big win on their home courts.

Tulsa won a tight doubles point with a 7-5 win on court-2 by Josh Goodger and Boris Camdem.

TCU’s Alastair Gray picked up a solid win on court-2 over 55th ranked Majed Kilani to make it 1-1. But Tulsa’s Stefan Hampe upset 69th ranked Eduardo Roldan on court-6 to make it 2-1 for the Golden Hurricane.

The remaining matches were three sets and Tulsa’s Kody Pearson clinched the win 3-6, 6-4, 6-4 on court-4 over 65th ranked Bertus Kruger.

The Texas Longhorns did not mess around in their season opener against Ole Miss at the USTA National Campus.

No. 18 Yuya Ito secures the win over Ole Miss with a 7-5, 6-3 victory over Filip Kraljevic! #HookEm🤘🎾 pic.twitter.com/JyAgjSPszS

That wraps it up for this week. To read more updates from Cracked Racquets, head over to www.crackedracquets.com.