Last season, the women’s team has enjoyed a dominant stretch in the Western State Conference under the direction of coach Deo Sy.

This season, the women will look for much of the same, and the men’s squad, under coach Chris Tissot, will look to get back on track and try to qualify for the postseason.

Here’s a closer look at the teams.

Glendale will seek a fifth consecutive conference championship, though it will be tested with just seven players. It will be almost an entirely new group who will attempt to extend the Vaqueros’ successful run.

Glendale will have six freshmen and one sophomore, but won’t have the depth its had in recent seasons.

“We don’t talk about trying to win another conference championship, just about the process of developing on and off the court,” said Sy, who led the Vaqueros to a semifinal appearance in the California Community College Athletic Assn. Southern California Regional final last season. “It comes down to being able to stay healthy because injuries have a tendency to catch up quickly.

“It’s a much different level for most of them now and you see what they can do and what their limits are. There’s a lot of opportunity for them.”

The conference tournament will take place April 5-6 in Ventura.

The 119th annual Ojai Invitational will occur April 25-28 and serves as the season-ending state tournament.

Tissot begins his second season at Glendale. The Vaqueros went 4-11, 2-6 for fourth place in the five-team conference won by Ventura.

It’s possible Glendale, which last won a conference title in 2014, can make a climb in conference with a 10-player squad that will include seven freshmen.

“We have some new exciting players and they are ready to step up to the challenge,” Tissot said. “I think we’ll be pretty deep from top to bottom in singles and we have some depth in doubles.

“A lot of our guys have played in tournaments, so they are tested. It’s just about trying to learn and build from each match.”

The conference tournament will occur April 5-6 in Ventura.

The 119th annual Ojai Invitational will take place April 25-28 and is the season-ending state tournament. 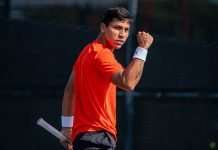