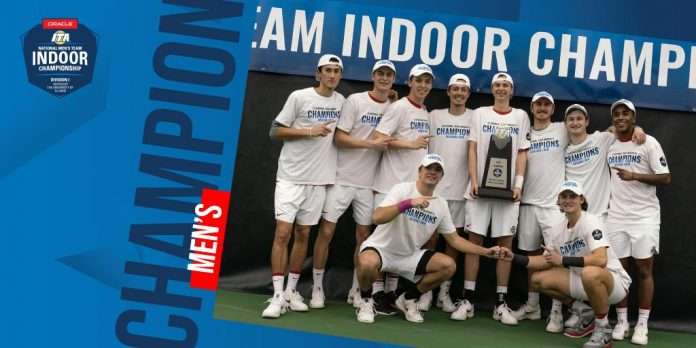 CHICAGO, IL – In a rematch of last year’s NCAA team title match, the scoreline remained the same, but the victor changed as top-seeded Ohio State dropped defending champion Wake Forest 4-2, to hoist the trophy as ITA Indoor champions Monday at the Midtown Athletic Club in Chicago.

“Last year we got caught in a tough battle with Wake Forest in North Carolina, and they were just too good,” Ohio State coach Ty Tucker said. “It was nice to get a good support group out here in Big Ten country. We couldn’t have done it without those [fans].”

The seventh-ranked duo of Seelig/Kobelt put the doubles point within reach for the Buckeyes when they dominated Botzer/Chrysochos, 6-1, on court two, but Wake Forest had other plans for the point as their two remaining teams both had advantages on their Ohio State counterparts.

Gojo/Gadjiev got Wake Forest back into it with a 6-3 win on court one, and the crucial doubles point came down to court three where OSU’s tandem of McNally/Tubert refused to go away. The Buckeye pairing was down 5-3 to Banthia/Zlobinsky, but stormed back to tie the match as 5 games apiece, then forced a tiebreak with the match knotted at 6-6.

OSU had won 12-straight doubles points entering the match with the Demon Deacons. The last time they dropped the doubles point was in the 2018 NCAA final when Wake Forest took the point and went on to win the title 4-2.

All tied up at 3-3 in the tiebreak, McNally/Tubert reeled off four-straight points to give Ohio State the doubles point for the 13th-consecutive outing, and give the top-seeded Buckeyes a 1-0 lead heading into singles play.

Wake jumped out to quick one-set advantages on courts three and six, while the Buckeyes took leads on one, two, four and five with No. 2 JJ Wolf leading the charge for OSU on court one.

Wolf had an electrifying outing on court one, sweeping his way to a 6-0, 6-3 victory over Borno Gojo to put Ohio State up 2-0 on defending champions. No. 86 Alex Kobelt also swept on court five to put the Buckeyes within one point of toppling the reigning NCAA and indoor champions and claiming the 2019 ITA Indoor title for the first time since 2014.

The Buckeyes were well on their way to an impressive seventh-straight sweep, but the Deacs didn’t go away easily. No. 21 Bar Botzer upset No. 12 Kyle Seelig in straight-sets on court three to put Wake Forest on the board and keep them alive down 3-1 with three courts still in play.

After winning the first set 6-2, Deacs freshman Sid Banthia flipped scores and dropped the second set to Hunter Tubert. He found his stride again in the third, though, and won 6-3 to bring Wake Forest within one of tying the match.

On court two, No. 1 Petros Chrysochos had his hands full with Ohio State sophomore John McNally. The Buckeye, ranked No. 62 in the ITA singles ranking, won the first set over the top-ranked player from Wake Forest 6-4, but Chrysochos forced a tiebreak in set two that he would go on to win 7-4 to force a third.

Before Chrysochos had a chance to try for the comeback, No. 49 Melios Efstathiou was attempting a comeback of his own on court 4, already down a set to Martin Joyce of Ohio State. Joyce won the first set 7-5, and was leading in the second when court two was pushed into a third set.

Joyce held onto the lead, recorded the upset and clinched the Indoor title for the Buckeyes with a 7-5, 7-5 win.

“It’s an honor to share the court and compete with that team,” Tucker said. “They make us better and we try to give them a good match every time we face them. Today we got lucky.”

The Ohio State men join the Georgia women as the Division I ITA Indoor Champions in 2019. Up next, the best of the best in Division III will duke it out on the courts for indoor supremacy.

Related: No. 5 Georgia Outlasts No. 2 North Carolina for Indoor Crown