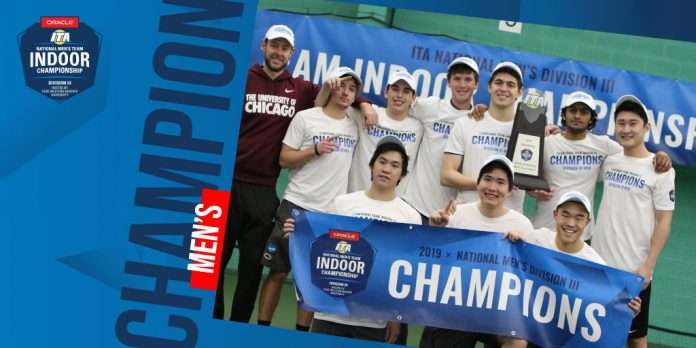 CLEVELAND, OH – The University of Chicago entered the weekend as the No. 1 overall seed and will leave Cleveland as Division III ITA Indoor champions as the Maroons took down the three-time defending champion Emory Eagles, 5-3, Sunday.

“This one has been a long time coming,” Chicago coach Jay Tee said. “We’ve lost a few finals in the past, and we’ve dropped some close ones with Emory, but this time I felt like we weren’t scared and that was the key to getting it done today.”

“This one has been a long time coming.” – Jay Tee

Head Coach of @UChicagoTennis weighs in on his teams win in the #ITAIndoors final. pic.twitter.com/Z8yyFV0RDk

In a classic matchup of 1 vs. 2, the Maroons grabbed an early lead on the reigning champs by grinding out two doubles results on courts one and two.

Kerrigan/Kumar outdueled Emory’s Spaulding/Warner 8-3 to put Chicago at an advantage with two courts still in play, but the Eagles duo of Mora/Cassone fought back on court three to snag a grueling victory on court three, 8-7 (7).

“Our court two doubles team was struggling most of the week, but they really stepped up for us when we needed them to,” Tee said.

Raclin/Yuan went the distance with Jemison/Bouchet to win 8-6 and put the Maroons up 2-1 heading into singles play.

Chicago jumped to a 3-1 lead when Josh Xu breezed to a 6-1, 6-3 win on court six. Emory didn’t flinch down 3-1 in a final for the second consecutive season and got one back on court two when Emory senior Adrien Bouchet outlasted Charlie Pei 7-5, 6-3.

Senior Jonathan Jemison knotted the match at 3-3 with his dominant 6-2, 6-4 performance on court one to upend Chicago junior Erik Kerrigan.

“We wanted to be emotional and loud and play to win, so we focused more on the point in front of us and not the title at the end of the road,” Tee said.

After falling behind early in the match, Jeremy Yuan came back on court two move Chicago within striking distance of grabbing the indoor crown. Yuan dropped the first set 6-3 to Hayden Cassone, but the No. 16 player in the nation battled back to win the second set 6-2 and force a third.

Yuan saw his six-match win streak snapped in the semifinal, but didn’t let that determine the outcome Sunday as he rallied past the Eagle sophomore 6-4 to win the point for Chicago.

“With Jeremy, you can’t count him out any time,” Tee said. “Those three-setters we won were huge for us, but we wouldn’t have gotten to this point without the guys on this team playing the way they did this weekend.”

With Chicago up 4-3, the indoor crown came down to tight contests on courts four and five.

On five, Alex Guzhva went up 1-0 as he took the first set 6-4, but Emory’s Andrew Esses refused to go away and managed to force Guzhva into his third three-set match of the season.

The Maroon frosh came into the day 2-0 in three-setters this season and won his outing Sunday 6-4, 2-6, 6-3 to move to 3-0 and clinch the match for Chicago, 5-3, snapping Emory’s impressive streak of indoor titles.

Congratulations to @UChicagoTennis on its first ITA Team Indoor National Championship with a hard-fought 5-3 win over three-time defending champion Emory in the final. pic.twitter.com/pND7eEuRKI