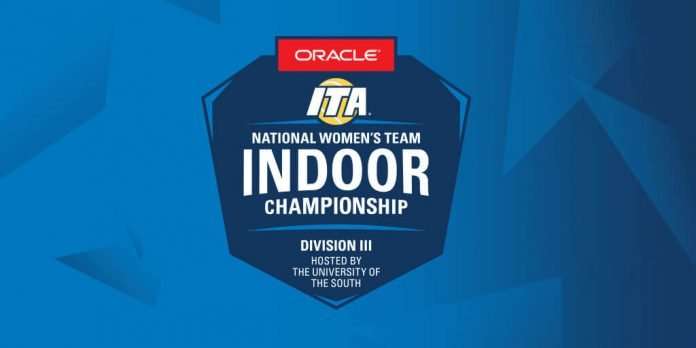 The conclusion of the ITA Indoor Championship season sees seven-seed Sewanee: The University of the South play host to eight of the best women’s teams in DIII March 1-3 in Tennessee’s capital city.

Although Claremont-Mudd-Scripps enters the weekend as the No. 1 overall seed, this year’s two-seed and three-seed come to the Volunteer State seeking a third-consecutive final appearance.

No. 2 Emory has won back-to-back indoor crowns over No. 3 Pomona Pitzer, and the Eagles have six women’s singles players ranked in the top-35, including No. 1 Ysabel Gonzalez-Rico.

The seven teams will try to unseat top-seeded Claremont-Mudd-Scripps and give the Athenas their first loss of the season and their first loss in what is currently 18-straight outings. The last time CMS loss was nearly a year ago when they dropped a 5-4 match at home to then No. 1 Emory. CMS would go on to flip the score when it mattered most and defeat the Eagles for the NCAA title two months later.

The Chicago men recently took home the DIII indoor title and the women come into this weekend as the five-seed. MIT comes down from the banks of the Charles River as the four-seed, Carnegie Mellon will be the six-seed and Washington University – St. Louis will be the eight-seed.

Play is set to begin for the 11th ITA DIII National Women’s Team Indoor Championship March 1 and a champion will be crowned on March 3.

Live results and live streaming will be available at Ensworth and Vanderbilt. To keep up with the event, follow @ITA_Tennis on Twitter/Instagram or check out the championship bracket on Slam.Tennis.

Catch us this weekend in Smashville! pic.twitter.com/WUeva86dXP