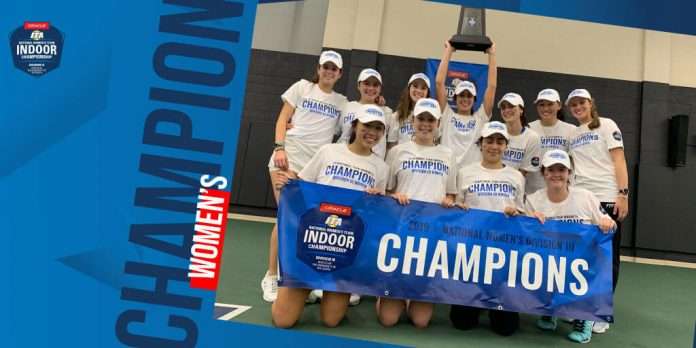 NASHVILLE, Tenn. – The conclusion of the ITA Indoor Championship season saw the Emory Eagles hoist the trophy for the third time in as many seasons when they downed defending NCAA champion and No. 1 seed Claremont-Mudd-Scripps, 5-3, Sunday afternoon to win the 2019 ITA Division III National Women’s Team Indoor Championship Presented by Oracle title.

The 1-vs-2 matchup may have been a rematch of the NCAA final from 2018, but coach Amy Bryant’s Eagles made sure the result wouldn’t be the same as their last meeting.

“We lost to CMS in the NCAA Championship last year, so it feels good to get this win today,” Bryant said. We know we have a long season ahead of us, and I think this provides a lot of motivation for us to just keep working.”

The defending indoor champion Eagles took an early lead on the one-seed Athenas with a win on court three during doubles play. Taylor/Watson barely gave an inch to their CMS opponents, cruising to an 8-1 victory. Cox/Allen of CMS then pulled the match even with an 8-3 win on court one, but Emory regained the lead heading into singles play thanks to Lopez/Cartledge win on two.

“I think doubles was key throughout the entire tournament for us,” Bryant said. “coach Barbora Krtickova and I had been working on a couple of different plays, and that really came together for us here, so that was fun to see.”

It didn’t take long for CMS to get things square again as Caroline Cox handled Stephanie Taylor, 6-3, 6-1 on court five.

Emory quickly took back and extended the lead with wins on courts two and six.

Eagles sophomore Defne Olcay swept Nicole Tan with identical 6-4 set wins. On six, Jessica Fatemi and Sarah Bahsoun went the distance in the first set with Fatemi outlasting Bahsoun to win 7-6. Fatemi got on a roll in the second set, though, and won 6-3 to bring Emory within match-point of claiming its third-straight indoor crown.

The top-seeded CMS refused to go away without a fight, and Rebecca Berger worked a three-set win on three to keep the Athenas’ championship dreams alive.

“In singles, it comes down to determination and grit at that point,” Bryant said. “We have a close-knit group, so it’s just nice to see them play together as a team.”

Berger traded 6-1 wins with Emory frosh Lauren Yoon before grinding out a 7-6 third-set win to make the score 4-3 with two courts active.

Court one was in a third-set as well with one of last year’s heroes during Emory’s title run, No. 1 Ysabel Gonzalez-Rico up on CMS junior Catherine Allen.

The winning point would come from a freshman on court four, though, as Emma Cartledge swept past another freshman in Sydney Lee 7-6, 6-4 to clinch Emory’s third-consecutive indoor title.

The victory moved the Eagles to 7-0 on the season, and dropped the defending NCAA champion Athenas to 7-1.

As the Eagles return to Atlanta with another trophy in-hand, the ITA National Team Indoor Championships come to a close. The women of Georgia and men of Ohio State earned the DI titles, while the Maroons of Chicago and Emory Eagles took the men’s and women’s DIII titles, respectively.