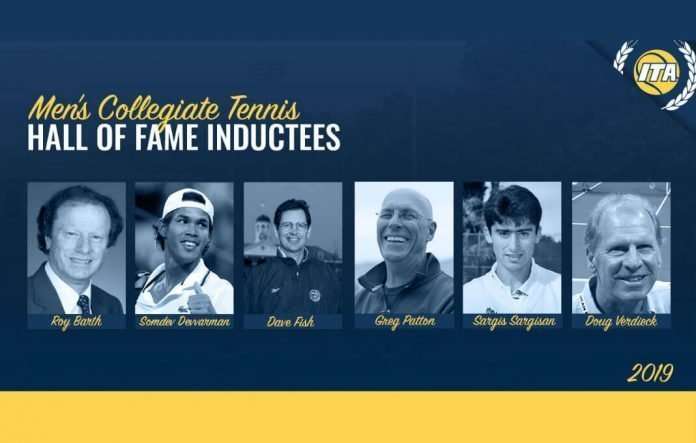 The 2019 ITA Men’s Collegiate Tennis Hall of Fame Induction Luncheon will take place on Sunday, May 19th in Orlando, Florida. Following the luncheon, the 2019 class will be honored on court before the start of the NCAA Men’s Team Finals at 3:00 p.m. If you are interested in attending the Induction Luncheon, please contact Rachel Dagen, ITA Director of Special Projects, rdagen@itatennis.com, as space is limited.

“On behalf of the ITA, I am delighted to announce that this distinguished class will be entering the ITA Men’s Collegiate Tennis Hall of Fame,” said Timothy Russell, ITA Chief Executive Officer and 2015 Hall of Famer. “These six inductees showcase the very best of the college tennis, and exude incredible talent, dedication, and commitment to our sport. I am looking forward to the 2019 Induction Luncheon in Orlando, Florida, during this year’s NCAA Division I Championships.”

“The 2019 class is very accomplished. We are extremely excited to add all six members into the Hall of Fame,” added John Frierson, ITA Collegiate Tennis Men’s Hall of Fame curator. “We are inducting exceptional coaches and players and we are anticipating a weekend of memorable festivities in May!”

Dave Fish, Harvard (1976-2018). During Fish’s 42 seasons coaching at his alma mater, he posted a record of 702-319-1, and is the winningest men’s tennis coach in Harvard history. Four times he was named ITA Coach of the Year and in 2014, he received the ITA Meritorious Service Award presented by ConantLeadership. Fish led Harvard to 25 NCAA tournament appearances, winning 16 matches. Among the 15 All-Americans that Fish coached is ITA Men’s Hall of Famer, James Blake (Class of 2017). Fish played tennis and squash at Harvard (1969-1972) and served as the squash coach from 1976-1989. He was a two-time All-American in squash and led the Crimson to three national championships, as well as an Ivy League tennis title in 1970. Fish served as a member of the ITA Board of Directors and the NCAA Division 1 Operating Committee for many years.

Greg Patton, Boise State, UC Irvine, UC Santa Barbara, CSU Bakersfield (1976-1998, 2003-2018). Patton is a two-time NCAA/ITA National Coach of the Year, five-time ITA Region Coach of the Year and 15-time conference Coach of the Year. Patton earned 808 career wins, the most among active coaches when he retired. His teams won 24 conference tournament championships and made 21 NCAA tournament appearances (16 at Boise State). Patton is a two-time recipient of the USTA/NCAA National Community Service Award (1997, 2003). From 1998-2003, Patton served as a coach with the U.S. Junior National Team.

Roy Barth, UCLA (1966-1969). Barth was a two-time All-American at UCLA. He reached the NCAA Doubles Championship semifinal and final during his Bruin career. He was ranked as high as eighth in singles and second in doubles during his time at UCLA. Barth played professional tennis for almost 10 years, reaching the round of 16 at the 1969 US Open and he reached the top 50 in the singles rankings on the pro tour. Barth has distinguished himself as a player, coach, teaching professional, and he is now the Director Emeritus of Tennis at the Kiawah Island Golf Resort, where he has been for over 40 years. Barth was a founding member of the Association of Tennis Professionals (ATP) and served as Treasurer on the Board of Directors for the PTR.

Somdev Devvarman, UVA (2005-2008). Devvarman, runner-up in 2006 and the 2007 and 2008 NCAA singles champion. His championship in 2007 was won against top seed John Isner. Devvarman was the ITA Indoor singles and doubles champion in 2007 and the ITA All-American doubles champion in 2007. Devvarman becomes the 13th player in the 124-year history of the tournament to win consecutive titles, and just the fourth to do so in the past 50 years with an unprecedented 44-1 record in 2008. After turning professional, Devvarman earned more than $1 million in prize money and reached the second round in all four Grand Slams. He competed for his native India in the 2012 Olympics and the highest singles ranking was No. 62 in the world.

Sargis Sargsian, Arizona State (1994-1995). Sargsian, a two-time All-American, two-time ITA Indoors champion and the 1995 NCAA singles champions was also the 1995 ITA Player of the Year and Pac-10 Player of the Year. Sargsian won four collegiate Grand Slam titles. Sargsian won one ATP event (Newport) and reached two finals; he also won a doubles title. Sargsian reached a career high No. 38 in the world in January 2004, before retiring in 2006. During his pro career he reached at least the third round in all for Grand Slam events. Sargsian played in the 1996, 2000 and 2004 Olympics for his native Armenia.

The ITA Men’s Collegiate Tennis Hall of Fame is housed at the University of Georgia’s Henry Field stadium in Athens. The late, legendary Georgia men’s tennis coach and Hall of Famer, Dan Magill, served as curator and chairman of the Hall of Fame. The current curator is John Frierson. The ITA Men’s Hall of Fame, which includes over 1,800 rare photos, inducted its first class in 1983 and has inducted more than 260 players, coaches, and contributors since then. Players are eligible for election to the Hall of Fame 10 years after the conclusion of their participation on the team, and once they are no longer participating on the pro tour. Coaches are eligible immediately following retirement. The main criteria for election are college accomplishments as well as honors earned after college.

The Intercollegiate Tennis Association (ITA) is committed to serving college tennis and returning the leaders of tomorrow. As the governing body of college tennis, the ITA oversees men’s and women’s varsity tennis at NCAA Divisions I, II, III, NAIA, and Junior/Community College divisions. The ITA administers a comprehensive awards and rankings program for men’s and women’s varsity players, coaches and teams in all divisions, providing recognition for their accomplishments on and off the court.