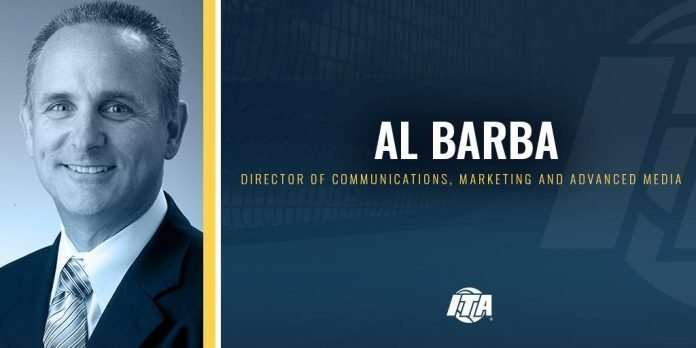 As a member of the Association’s senior leadership team, Barba’s duties will include developing and implementing strategies that will raise the profile of college tennis and the ITA brand.

“I would like to extend my sincere thanks to Timothy Russell and Chief Operating Officer Erica Perkins Jasper for the opportunity to join the ITA and help build upon the communications foundation already established,” Barba said. “I am looking forward to joining a dedicated and hard-working staff as we team together to tell the story of college tennis, while serving the many student-athletes, coaches and alumni who have contributed to the growth of the sport.”

Barba brings more than 20 years of intercollegiate athletics experience to the ITA. He most recently served as director of athletics communications at Kennesaw State University where he spent the last seven years.

“We are excited and looking forward to Al Barba joining the Intercollegiate Tennis Association,” Russell said. “Al’s significant experience and knowledge will prove valuable as we work together to elevate the stature of our sport, increase the visibility of our Association, and serve our membership.”

A veteran of athletic public relations, Barba has led the communications efforts for two NCAA Division I athletics departments and an NCAA Division II conference office.

During his tenure at Kennesaw State, Barba served in a leadership role, managing communications initiatives for an 18-sport intercollegiate athletics department and served on the Hall of Fame committee.

In the spring of 2014, Barba initiated and launched “Inside the Owls Nest”, a monthly one-hour Internet broadcast that provided a behind-the-scenes look into Kennesaw State Athletics.

Taking a lead role in the University’s public relations efforts that publicized the launch of an NCAA Division I Football Championship Subdivision (FCS) program, Barba was the media contact for the inaugural season in 2015. He also served as executive producer for a documentary on the creation of the Kennesaw State football program, and hired the first broadcasting team.

Barba also initiated online video streaming of the men’s and women’s basketball championships, live scoring at the men’s golf championships, and a greater video presence on the CCAA’s official website.

During his nine years (1998-2007) at Pepperdine, Barba managed two full-time staff members and oversaw all areas of publicity for the University’s 15-sport Division I athletics department. His duties included preparation and dissemination of news releases, statistical updates, record keeping, and media guides. Other responsibilities included sustaining and enhancing local and national media relations, game management, and assistance with marketing and promotions. Among his many accomplishments was the successful re-launch of the athletics website in 2003, which was later recognized by CollegeHoops.com as the nation’s second-best collegiate athletics web site.

Barba began his career in 1988 as a sports information assistant at the University of San Francisco upon graduation from Pepperdine where he earned a journalism degree. He then worked in the public relations department for the San Francisco 49ers (1989-94) before assisting former 49ers standout and NFL Hall of Famer Ronnie Lott in a variety of business initiatives. During that time, he also worked as a sportswriter for the West County Times newspaper in Richmond, Calif.

Barba went on to serve as Media Relations Manager for the Arena Football League’s San Jose Sabercats (1997-98) prior to returning to Pepperdine in 1998.

Barba’s many years of event experience, includes serving as media relations coordinator for the 2006 NCAA Division I Baseball Malibu Regional, working the 1996 Summer Olympics in Atlanta, the 1997 NCAA Men’s Basketball West Regional, the 2006 World Baseball Classic and the 2007-09 Emerald Bowl and 2011 and 2013 Kraft Fight Hunger Bowl in San Francisco.

Barba, who is an active member of the College Sports Information Directors of America (CoSida), began his new role with the ITA April 15.