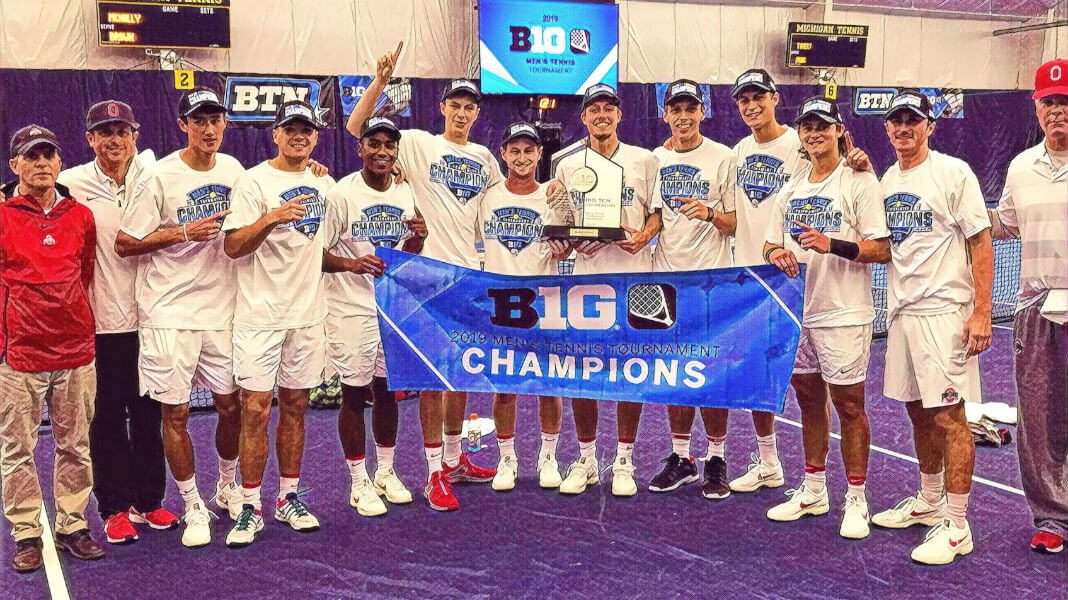 The Pac 12 and Big 10 had their conference tournaments this past weekend. The usual suspects and a few spoilers made some statements before the NCAA tournament gets started next weekend.

The California Golden Bears knocked off top-seeded UCLA on Friday in Ojai.

Cal’s Ben Draper and Jack Molloy clinched a crucial doubles point over UCLA’s Bryce Pereira and Patrick Zahraj 7-6. Bjorn Hoffman added to the lead to make it 2-0 by defeating Eric Hahn 6-1, 6-2 on court 6 but Zahraj bounced back by defeating Draper 6-2, 6-3 on court 4.

Ojai is #BearTerritory! @CalMensTennis shocked UCLA in the semifinals and have advanced to the #Pac12Tennis Championship match.

The USC Trojans got the best of the Stanford Cardinal in the battle of the #2 and #3 seeds on Friday night.

Daniel roars to the clincher with a winning tiebreaker on court 2!
Trojans win this #Pac12Tennis semifinal to move on to the title match in Ojai!#FightOn ✌️ pic.twitter.com/fLv44wuH1O

The USC Trojans rode the day before’s momentum to the Pac-12 title and downed the upset-hungry Bears 4-0 on Saturday.

The Trojans got it rolling in the doubles point as Jack Jaede and Laurens Verboven clinched the point on court 2 over Can Kaya and Paul Barretto by a score of 6-4.

The Buckeyes bounced back from a tough doubles point to defeat rival Michigan 4-2 in the Big 10 semifinals.

Connor Johnston Mattias Siimar clinched the doubles point over JJ Wolf and Martin Joyce (30th ranked) 6-3. The Buckeyes then came out firing in singles and Hunter Tubert got the party started by downing Gabe Tishman 6-4, 6-0. Martin Joyce then downed Siimar (67th ranked) 6-3, 6-4 on court 3 and Kyle Seeling (53rd ranked) defeated Johnston 6-1, 7-5 on court 4 to make it 3-1.

However, the Wolverines could not build off that momentum and John McNally (22nd ranked) clinched the win by defeating Myles Schalet 3-6, 6-1, 6-3.

The Fighting Illini bounced back after losing the doubles point to bounce Penn State on Saturday.

Christian Lakoslejac and Christos Antonopoulos downed Gui Gomes and Vuk Budic 6-4 to clinch the point. Like the Buckeyes, the Illini came out firing in singles with Zeke Clark defeating Gabe Nemeth 6-2, 6-0 to even the match.

Singles play advances the #Illini to the @bigten championship match against the top-ranked Ohio State Buckeyes! 🏆

This never gets old #GoBucks pic.twitter.com/dzBH5NDrMq

Martin Joyce then got the Buckeyes within one point of the title by defeating Zeke Clark 6-2, 6-4 and Kyle Seelig (53rd ranked) clinched the title 7-6(6), 6-2 over Siphosothando Montsi on court 4.

That wraps it up for this week. Be sure to tune into the NCAA selection show on Monday to see where all your favorite college teams will be headed!

To read more updates from Cracked Racquets, head over to www.crackedracquets.com.