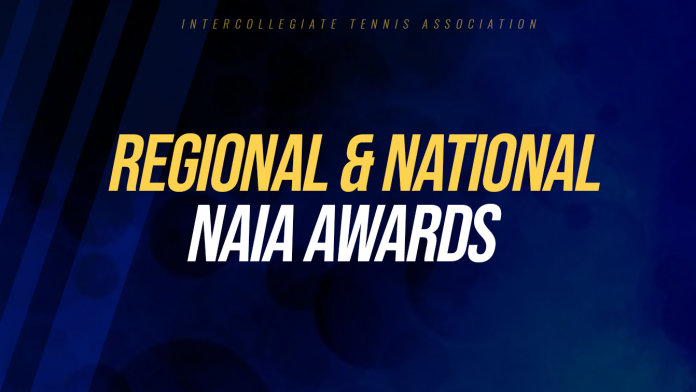 TEMPE, Ariz. (May 13) – The 2019 ITA National Association of Intercollegiate Athletics (NAIA) men’s and women’s regional and national award winners were announced Monday during a banquet prior to Tuesday’s opening of the NAIA National Championships in Mobile, Ala.

Georgia Gwinnett College’s Chase Hodges swept the Wilson/ITA Coach of the Year honors for his work with both the men’s and women’s teams. He led the men to a 23-0 record, a 105-match winning streak, first-round bye and No. 1 seed in this week’s NAIA National Championships. The Grizzlies’ women’s team posted a 16-1 record and earned the top seed in the national championships.

In addition to an exceptional season on the court, Esposito has made a major impact off the court, providing leadership to his teammates, excelling in the classroom and giving back in the community. A member of the Dean’s List, Esposito mentors an elementary-aged child every week at the poorest school in his county, referees intramural sports on campus, teaches tennis lessons to 30 kids in his hometown each summer and is actively involved in his church.

A standout performer on the court, Bauss has made a difference off the court. She has been a member of the Dean’s List each semester and is involved in the Campus Fellowship of Christian Athletes program. Her community service work includes raising money for Shriner’s Children’s Hospital, traveling to a family-owned orphanage in Mayamar to assist children, mentoring an elementary-aged child at the county’s poorest school, volunteering at the Boys and Girls Club and spending time teaching tennis to young people.

The NAIA Championships are scheduled for May 14-18 at the Mobile Tennis Center in Mobile, Ala.

The Intercollegiate Tennis Association (ITA) is committed to serving college tennis and returning the leaders of tomorrow. As the governing body of college tennis, the ITA oversees men’s and women’s varsity tennis at NCAA Divisions I, II and III, NAIA and Junior/Community College divisions. The ITA administers a comprehensive awards and rankings program for men’s and women’s varsity players, coaches and teams in all divisions, providing recognition for their accomplishments on and off the court. For more information on the ITA, visit the ITA website at www.itatennis.com, like the ITA on Facebook or follow on Twitter and Instagram.