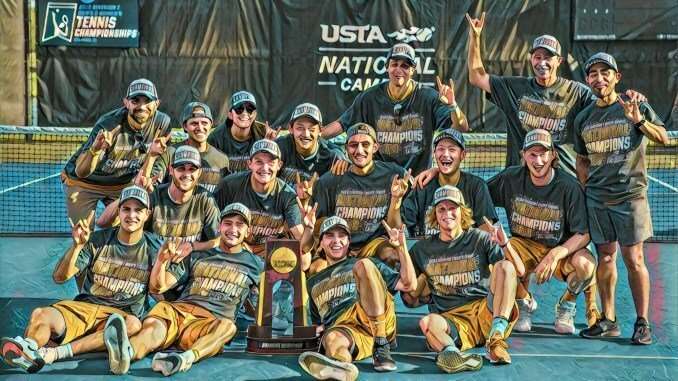 Just like that, the college tennis season has come to a close. The senior-heavy Texas Longhorns battled adversity to win the team title, tarnishing the Wake Forest Demon Deacons in the final.

The UCLA tandem of Maxime Cressy and Keegan Smith picked up the US Open Doubles Wild Card without dropping one set all season! The team’s combined height of 13 feet makes these guys nearly impossible to break.

While the 2020 dual match season is far away, why not preview some of next year’s favorites (who cares about the French Open, anyway?).

Some of last year’s teams like Texas, Mississippi State, and Baylor are losing a lot of seniors but also loading up on fresh talent. I will give an early preview of 5 favorites and 5 dark horse picks that I think could do some damage in the 2020 season.

The Gators finished the season ranked 4th after a great run to the Final Four.

The good news for Florida is that they are only losing two seniors from this year’s roster in Alfredo Perez and McClain Kessler. That means they are returning many heavy hitters including Oliver Crawford, Sam Riffice (NCAA singles quarterfinalist), Johannes Ingildsen, Andy Andrade, Duarte Vale, and Lukas Grief.

Not to be overlooked are the two blue-chip recruits they are getting in the fall, Will Grant and Blaise Bicknell. This is going to be a loaded lineup and I expect the Gators to be dominant in the SEC again next season.

After winning the ITA Indoors and earning this year’s top seed, the Buckeyes were tripped up by the UNC Tar Heels in the quarterfinal.

I’d imagine Ohio State will have a bad taste in their mouths this summer and will be eager to go after the title again next year. They are losing two key players from last year’s squad in Martin Joyce and Hunter Tubert.

However, their top 3 players return and one of those top players is JJ Wolf who only lost twice this season and is currently ranked 268 ATP. The Buckeyes are also getting a top recruiting class, headlined by Cannon Kingsley (13.94 UTR) with top American recruits JJ Mercer and Robert Cash joining the party as well.

The Bucks will bring back some experience at the top and fresh talent as well which could make for a tough team to beat come next May.

After a heart-breaking loss to Oklahoma in this year’s round of 32, the Aggies are only graduating one senior in Kevin Lam who was in and out of Texas A&M’s doubles lineup this year.

Hady Habib, Val Vacherot, Carlos Aguilar, and Barnaby Smith should be great leaders for this squad while all 5 of last year’s freshmen return with some dual match experience under their belts.

The UNC Tar Heels were narrowly defeated by Wake Forest in this year’s NCAA semifinal. Coach Paul always seems to have his players playing their best tennis in May.

I would expect the Tar Heels to be playing some big time tennis next May as well with only Bo Boyden graduating from this year’s squad. No doubt, Boyden is a big hole to fill. He was a rock at 5 singles and at the top doubles spot with Will Blumberg.

The Tar Heels are bringing in a top recruiting class led by Australian Rinky Hijikata (13.80 UTR). Boyden will be missed but I’m thinking the Tar Heels will do just fine next season.

The USC Trojans were tripped up by the Tar Heels in the round of 16, but USC is bringing back a loaded lineup next season.

They will be without some key contributors in Laurens Verboven, Logan Smith, Jack Jaede, and Tanner Smith, but they return many top players including Brandon Holt, Daniel Cukierman, Riley Smith, Jake Sands, and Mor Bullis.

They are also bringing in a top recruiting class featuring California recruits Stefan Dostanic, Ryder Jackson, and Colter Smith. The Trojans will be tough to beat in a fiercely competitive Pac-12 conference next season.

Paul Jubb may have stole the show last week but the Gamecocks are only losing one starter from last year’s squad and have the nation’s 13th ranked recruiting class coming in.

South Carolina had a few big wins last season and after finishing the year ranked 18th, I’d expect the Gamecocks to be dangerous next season in SEC play.

The Cowboys are also only graduating one senior and are getting a big-time transfer in Dominik Kellovsky from Arizona State (former top 500 ATP and played line 2 singles and 1 doubles for the Sun Devils).

They are also bringing in Turk Koray Kirci (UTR 13.31) for next year. The Cowboys finished last season ranked 22 and had a huge win over TCU in the Big 12 tournament.

They are also hosting the NCAA Championships next May, which will be a huge advantage if they can make it to the final 8.

After a rocky start, the Golden Bears ended their season on a high note, making a run in the NCAA tournament defeating 15th-seeded Illinois 4-1 before falling to Texas in the sweet 16.

The Bears also beat UCLA in the Pac-12 semifinals after falling to the Bruins twice during the regular season.

The Golden Bears return their full line-up from last season which includes Pac-12 freshman of the year Yuta Kikuchi and a top doubles team in Kikuchi and Jacob Brumm.

The Pac-12 will be very competitive with USC, UCLA, Arizona, Stanford, and Arizona State returning some good rosters but the Bears should not be overlooked. #unbiased

The Blue Devils had a bit of a disappointing season, finishing the year ranked 53rd.

However, Duke is bringing in the nation’s top-ranked recruiting class. They also have some talent returning at the top of their lineup with Nick Stachowiak and Spencer Furman returning for their senior years.

The ACC will be tough as always but Duke should definitely improve from last year’s result.

The UCF Golden Knights finished last year ranked 31 and like the Cal Bears, are not graduating any seniors from last year’s team.

The Knights had a few impressive results from last year including a 4-0 win over Miami and a close 4-3 loss to Wake Forest.

John Roddick usually manages to bring in some top talent for the spring so I wouldn’t be surprised if the Golden Knights have one more big-timer join their roster in the spring.

January is only 7 months away which is pretty far away but until then, be sure to follow the college stars on the professional tour this summer!

To read more updates from Cracked Racquets, head over to www.crackedracquets.com.