Dave Mullins recalls a time back in 2004 shortly after accepting his first college coaching job at the young age of 24 where he could have used some of the same resources and tools that he is building in his new role as the Intercollegiate Tennis Association’s (ITA) Managing Director of Community Engagement & Coach Empowerment.

Starting that first job as the associate head men’s coach at DePaul University in Chicago, Mullins said he knew very little about what it took to be a successful NCAA Division I tennis coach and didn’t know where to look for answers to his questions.

“I was coming from the world of finance and had never coached before,” said Mullins, who is originally from Ireland and was an All-American at Fresno State. “I was thrown in there because I was a decent player and I was cheap and eager. But I didn’t really know where to go for help.”

So, one of Mullins major goals since his first day on the job Aug. 4 is to elicit feedback from coaches as to whether the establishment of a coaching certification pathway program to teach first-time college coaches how to succeed would be beneficial to college tennis coaches.

“Right now, there is very little required to be a college tennis coach, you just have to have your degree and a background in tennis, and it’s just up to the institution to decide if you can be a coach,” Mullins said. “I think it would really add value and not just check some boxes along the way. But if we do it, I’d think we’d need to make sure it’s done at a high level for coaches at all five divisions.”

The ITA is the official governing body of college tennis and also serves as a coaches association for NCAA Division I, II, III, NAIA and junior college.

Mullins could have also used a mentor relationship with an older, experienced coach. “We have something like that, but it hasn’t been as consistent as the ITA would have liked and needs some more structure at this time,” Mullins said, adding he would like to potentially start a pilot program after the New Year beginning with ten young female coaches.

The coaching empowerment component in his job title excites Mullins, who most recently worked in Dublin, Ireland, as the Director of Sports at a fitness club. “I have a good sense for what may be useful,” said Mullins, a former Davis Cup player for Ireland. “We need to constantly look at ways to consistently educate our coaches.”

Mullin started a Coaches Podcast and his first one is a conversation with TCU men’s coach Dave Roditi.

“I believe the peer-to-peer education and learning is so important, especially from our more experienced coaches, on what they do well and what they don’t do well,” said Mullins, who spent 12 years on the coaching sidelines, including eight as the head women’s coach at the University of Oklahoma. “We need to keep encouraging the younger coaches to think about their profession and what they can do better.”

🎙 PODCAST ALERT@DaveMullins_ITA talks the evolution of the coaching philosophy with Claire Pollard this week! Listen in NOW!

The other component to Mullins’ job is community engagement, and Mullins said hosting various Kid’s Days are a great way to engage the community. A recent Kid’s Day in Tempe, Ariz., brought about 150 local youngsters out to hit with players and coaches from the Arizona State men’s and women’s tennis teams. The USTA Southwest Section also got involved and participated.

“They came out and shared some insight, and we had a coaches’ panel that was designed to educate parents, players and coaches on college scholarships,” Mullins said. “The feedback we have received is positive. People really appreciate it, and they walk away having learned something they hadn’t known before.”

The overall promotion of college tennis is the key.

“It’s trying to get college tennis in their heads a little bit and provide the educational opportunity,” Mullins said. “There’s not a lack of information out there, and I just think a lot of parents don’t really know where to start. Any time we get the opportunity to educate the parents, players and coaches we need to take advantage of that opportunity.

“These (ITA) tournaments often bring us to different parts of the country, so it’s not like we are always going back to the same places each year,” Mullins added. “We have a golden opportunity to engage with the tennis community wherever we go.”

Mullins’ biggest initiative in terms of community engagement currently is Tennis For America, a program where recently graduated college tennis players spend a year of service somewhere in the tennis industry. Modeled after Teach For America, the pilot program would be the first of its kind in NCAA athletics and Mullins is currently applying for AmeriCorps VISTA funding where the U.S. government would help fund the program or provide a monthly stipend to the participants.

“That would free us up to pay for things like housing and orientation and graduation ceremonies,” Mullins said. “So, there’s a lot that goes into it. We are still in the application process and building out a plan that we will eventually share with the coaches. We would like to get the information to the players and are looking to kick that off on June 1.”

Initial programs will be created in New York, Maryland, Chicago, Arizona (Nogales) and California (Compton). Mullins said the idea is to build upon organizations already working in these communities, and National Junior Tennis & Learning programs are a perfect place to start.

“We want to go in and actually help recruit volunteers and align with their undergraduate work,” Mullins said. “Maybe they did marketing work, or they want to work in a non-profit. Or maybe they want to coach tennis or work in tennis management. Some of these students might just want to take a year off and figure out what they want to do with the rest of their professional lives.”

Mullins added that the fact that these people have a tennis background helps the organizations and can potentially lead to full-time employment.

When the ITA set out to search for a replacement for departing Chief Operating Office Erica Perkins after she left in the spring, Mullins said the ITA was vague in the job description, simply stating it would be a senior leadership position.

“They wanted to find the right person first, then based on who they found, write the job description,” said Mullins, who recently received his Masters’ Degree in Sports Psychology.

If the first four months are any indication, it looks like the ITA has found the right man for the job. 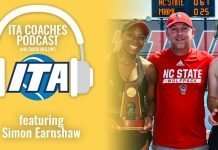