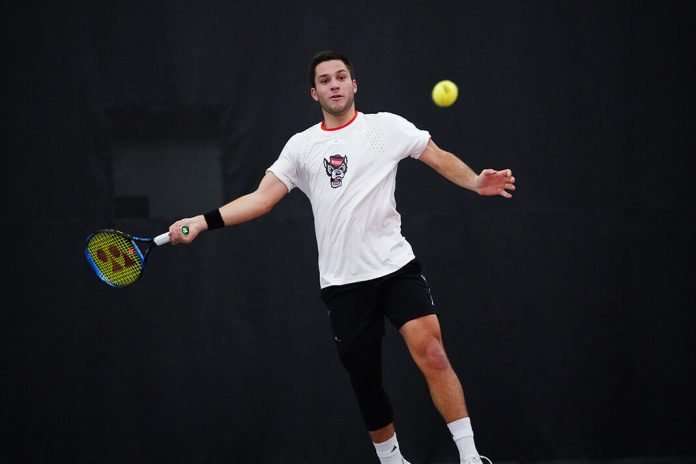 TEMPE, Ariz. (January 28) – Alexis Galarneau of North Carolina State was named the first UTR ITA Division I Men’s Player of the Week after a dominating performance during the ITA Kickoff Weekend. The North Carolina State senior boasted a 4-0 record at the Virginia Regional and helped the Wolfpack upset the regional host, the University of Virginia.

The Wolfpack’s win at the ITA Kickoff Weekend secured their spot in the 2020 Division I National Men’s Team Indoor Championship presented by Oracle – their first appearance at the national championship in program history.

Galarneau played a major role in the win over the Cavaliers. He defeated the ITA preseason #1 ranked singles player, Carl Soderlund (UTR 14.47) in straight sets (7-6(3), 6-2) – Soderlund boasts the second-highest UTR of any college player in the country.

In addition to clinching the match with his win over Soderlund, Galarneau helped secure the doubles point alongside partner Robert Turzak. It was the pair’s first win over a ranked opponent this season.

On Saturday, Galarneau and Turzak sealed the doubles point against the Aggies. He went on to defeat Utah State’s Sergiu Bucur (UTR 12.07) 6-0, 6-0.

Finishing Kickoff Weekend with a 4-0 record and defeating the preseason #1 ranked player, Alexis Galarneau is named the Men’s Division I UTR/ITA National Player of the Week!