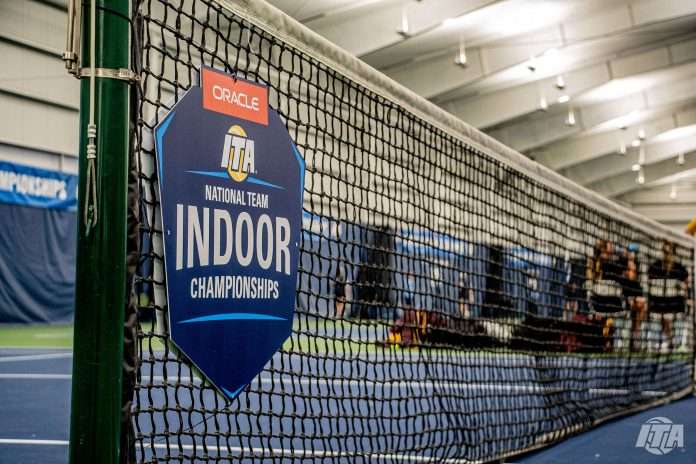 It was a busy first day at the 2020 ITA Division I National Women’s Team Indoor Championship Presented by Oracle, with three seeded teams getting knocked out of the main draw.

The following matches took place during the first day of competition and are featured with Cracked Racquets play-by-play commentary on PlaySight’s new GO technology platform.

In a matchup between a traditional indoor powerhouse and a program without indoor courts on their campus, No. 2 seed North Carolina defeated Arizona State 4-1. North Carolina started strong, clinching the doubles point with wins on courts No. 2 and No. 3. North Carolina then rolled to straight-set wins at No. 4 and No. 5 singles, before Sara Daavettila clinched the win on court No. 2. Savannah Slaysman tallied Arizona State’s sole singles win at No. 6 singles.

We have a winner!!

In a match that was much closer than the scoreline would indicate, the Wolfpack of NC State took down the Princeton Tigers 4-0. After splitting the first two doubles matches to finish, NC State saved match points at No. 2 doubles before ultimately taking the match 7-5. Straight set wins by Jaeda Daniel, Adriana Reami, and Alana Smith powered the Wolfpack to the win.

In an east coast vs west coast battle, the Duke Blue Devils upset the No. 6 seed Pepperdine Waves. Duke took the doubles point and a quick win No. 3 singles. After Jessica Failla put Pepperdine on the board at No. 2 singles, Duke secured the victory with a pair of 3-set wins from Meible Chi and Chloe Beck.

Virginia ran away with the doubles, winning 6-1 and 6-2 at the No. 2 and No. 3 spots, respectively. However, defending ITA National Indoors Champion, Georgia, stormed back with straight-set wins from Meg Kowalski and Anna Hertel, before a 3-set win from former ITA National Player of the Year, Katarina Jokic. Jokic’s win put the Bulldogs within one point of the match. Senior Marta Gonzalez ultimately clinched the win with a three-set ranked win over Virginia’s Amber O’Dell.

In the match of the day, Michigan came within two games of upsetting the defending NCAA champions and No. 1 seeded Stanford. Despite a slow start and dropping the doubles point, Michigan quickly recovered to the tune of three straight-set victories. Proving that No. 6 singles are just as important as No. 1 singles, the match would be decided when Emma Higuchi of Stanford took a 4-6, 6-2, 6-4 decision at the bottom of the line-up.

The Cardinal outlasts the Wolverine 😤 pic.twitter.com/HRJTDFwX4C

In a rematch from last year’s Kickoff Weekend opening round, Georgia Tech took revenge on Ohio State with a 4-1 victory to advance to the quarterfinals. Strong doubles play got the ball rolling, with Georgia Tech using wins at the top two singles spots to gain momentum. In the end, it was Nadia Gizdova that clinched the win for the Yellow Jackets.

The Yellow Jackets will face either Michigan or Stanford in the quarterfinals. #TogetherWeSwarm pic.twitter.com/n74vBnIYta

Illinois’s first match as a National Indoors host site proved to be a tough one, as the No. 3 seed UCLA took control early and never looked back. After winning the doubles point, UCLA took three quick singles matches, dropping four games or less in each. Freshmen Abbey Forbes and Sasha Vagramov both tallied wins.

She just moved to LA, go to UCLA 🎶 pic.twitter.com/o81bL4PlOh

The final match of the day saw another seeded team fall, as Florida State outlasted No. 5 seed Texas 4-3. In what would prove to be a crucial doubles point, Florida State posted identical 7-5 scorelines to win No. 2 and No. 3 doubles. Five singles matches finished in fairly lopsided fashion, knotting the match a 3-3. With that, all eyes turned to a third set where a late hold by Nandini Das ended a streak of several consecutive breaks. With one final break, Das sealed the match and set up a quarterfinal match-up with UCLA.

Powered by https://t.co/tX0JUrtAWK –
use promo code CR50 for 50% off string, bags or racquets. pic.twitter.com/kLAOIdYnO7

Matches will resume Saturday at 9 AM CST at the XS Tennis Village.