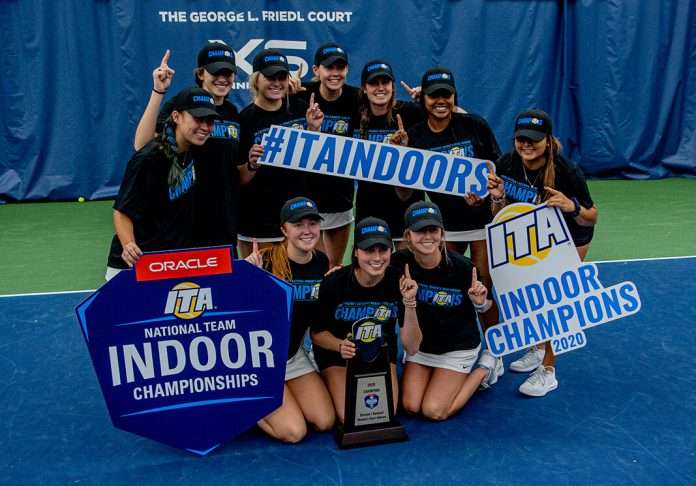 The Tar Heels are bringing another ITA Indoors trophy home to Chapel Hill. In a midday match at XS Tennis Village in Chicago, UNC soundly defeated UCLA 4-0 in just a little over two and a half hours.

The Tar Heels have appeared in the championship match for the past six years and now have taken the title half of the time. The first victory for the Heels came in 2013 under Coach Kalbas – he has coached the program to all four of their Indoors titles.

Doubles featured fierce competition – the No. 2, No. 4, and No. 6 ranked doubles pairs taking the courts. Kalbas flipped the duo of Scotty/Morra with Jones/Sanford before the match started. Elizabeth Scotty and Cameron Morra took down Annette Goulak and Abbey Forbes 6-2 to put UNC up. The crowds’ attention then shifted to court one where the No. 2 Hart/Bolton were methodically working towards a victory over Daavettila/Graham. The Bruins pulled even with a 6-2 victory.

The doubles point came down to a close 7-5 battle between Sanford/Jones and Altick/Johnson. The Tar Heels headed into singles play on a high – up 1-0.

Jones struck first in singles – swiftly taking the match over No. 112 Annette Goulak in straight sets (6-0, 6-2). Alle Sanford and Elizabeth Scotty also jumped out to early leads in their respective matches. Scotty won her first set 6-4 and then took control and retired Abi Altick 6-1 in the second.

With the Tar Heels up 3-0, it looked as if the match would be decided on the back half of the lineup entirely. Sanford was up 5-3 in the second and was looking to close it out, but freshman Bruin Sasha Vagramov dug in her heels and pushed the match to a tiebreak.

Meanwhile, the rest of her team was also mounting a comeback. Abbey Forbes took the second set in her match to level it at one set a piece. Senior Jada Hart was back and forth in the third set with Cameron Morra.

Despite the late surge, the No. 4 Bruins were unable to hold off the No. 2 Tar Heels. A long return from UCLA’s Elysia Bolton finished off the match. Senior Graham ran and jumped into the arms of her waiting teammates. No. 7 Graham took the match 7-6 (4) 6-3 over No. 14 Bolton.

The 2020 ITA Division I Women’s Team Indoor National Championship marked the 33rd year of the event. With the win, UNC moved to tied for third with the Georgia Bulldogs for all-time wins (4).