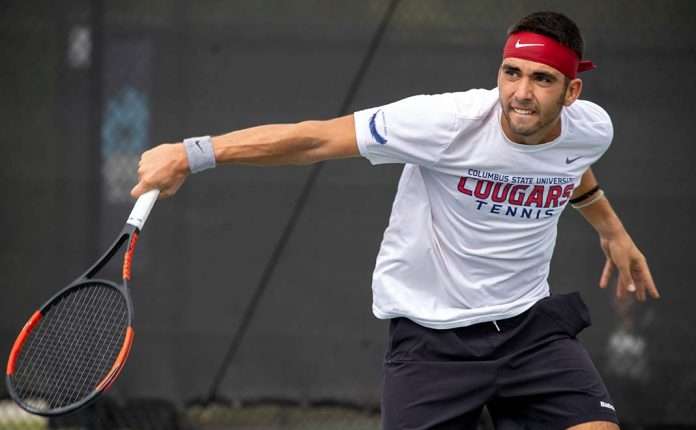 Florida’s Oliver Crawford was named the Division I Men’s UTR ITA Player of the Week after going undefeated in singles and doubles. Crawford blazed through his singles matches winning all three in straight sets. In Florida’s conference matchup against Alabama, Crawford set the pace for his team by leveling No. 80 Edson Ortiz, 6-0, 6-1. The Gator also recorded wins over Auburn’s Dollman and Mercer’s Stuart (No. 46). Playing at No. 1 doubles, Crawford and partner Riffice soundly defeated both their Alabama and Auburn opponents, 6-3 each.

Coming off of a major upset of No. 8 Abbey Forbes, Eryn Cayetano was named the UTR ITA Division I Women’s Player of the Week. In USC’s match against UCLA, the freshman showed her grit by outlasting Forbes in a three-set battle, 7-6 (1), 1-6, 6-4. Earlier in the duel match, Cayetano alongside USC’s Kulikov downed the No. 1 doubles duo in the country, Bolton/Hart, 6-1. Cayetano was also won in singles and doubles during the Trojans’ matchup with LMU. She clinched the match for USC defeating LMU’s Voracek 6-3, 1-6, 6-1.

Regalado finished the inaugural ITA DII Men’s Indoor Championship on a high note. The junior Cougar played a crucial part in Columbus State winning the championship. To put the Cougars up early, Regalado won a never-ending tiebreaker at No. 1 doubles, 7-6 (13). He then dismantled No. 1 Ibanez, 6-1, 6-2, to put the Cougars up 2-0. Earlier in the championship, Regalado recorded a win over Saint Leo’s Faletto who was forced to retire due to a leg injury – Regalado was up 5-0 in the first set when the match was called.

Senior Buccaneer Jil Engelmann guided her team to the first ever DII Women’s Indoor Championship. Engelmann went undefeated in singles during the championship and 2-1 in doubles. Engelmann played at No. 1 singles all weekend and recorded an upset of No. 4 Natalie Espinal of Nova Southeastern. She downed Espinal 6-2, 6-1 to help her team comeback from a loss in doubles and move onto the championship match.

Jed Kronenberg of Pomona-Pitzer went undefeated as his team matched up against No. 36 Washington & Lee and California Lutheran. Kronenberg took down Harry Shepherd to notch a point for the Sage Hens in their 8-1 victory. He also tallied a point with a 8-4 victory against Fedor/Tapp. In Pomona-Pitzer’s match against Cal Lutheran, Kronenberg recorded another doubles win over Yaghoubi/Murphy.

CMS’s first year standout Justine Leong was awarded the UTR ITA Division III Women’s Player of the Week. During the DIII Women’s Indoor Championship, Leong picked up two singles wins – one ranked and one over the defending national champion. Leong won in straight sets against No. 7 Taylor in the semifinal matchup against Carnegie Mellon. She also downed the defending national champion, Ysabel Gonzalez Rico, 6-3, 6-3 to tally a point for her team in the championship match. Leong also went undefeated in doubles during the championship.

Juan Batalla of Xaiver University of Louisiana was named the first UTR ITA NAIA Men’s National Player of the Week. No. 17 Batalla put forth a Herculean effort and went 4-0 in doubles and 4-0 in singles over the four day LSUA tournament. The freshman won all of his matches in straight sets – the closest match being 6-2, 6-0. Playing at No. 2 doubles with Samir Chikhaoui, Batalla blew through his opponents. Three of the matches ended 6-1 and one finished 6-0.

Freshman Lailaa Bashir shined for the Gold Nuggets at the LSUA tournament. She was undefeated in both singles and doubles. No. 14 Bashir flew through her singles matches – she won all four of them in straight sets. The closest match was 6-0, 6-3. In doubles play, Bashir won five straight matches. The No. 1 doubles team of Bashir and Charles-Alfred did not let a doubles team get any closer than 6-3 to them all weekend.

Coming off of two ranked singles wins, Tyler JC freshman Lamar Bartley was named the first UTR ITA Junior College Men’s Player of the Week. No. 9 Bartley started the weekend by downing Collin College’s Adam O’Shannessy (No. 13) in straight sets, 6-4, 6-4. The next day he upset No. 2 Sander Jans in a three-set shootout, 6-4, 4-6, 6-1. Bartley was also undefeated in doubles with his partner Jaycer Lyeons.

Apache freshman Emelie Schwarte finished the weekend undefeated after Tyler JC took on No. 9 Seward County and No. 10 Collin College. Schwarte ran away with a 6-0, 6-1 win against Collin’s Andrea Farris. She also recorded a ranked win against No. 18 Maria Garcia. Partnering with Helena Jansen, Schwarte defeated her doubles opponents from Seward County and Collin College, 8-2 for both.