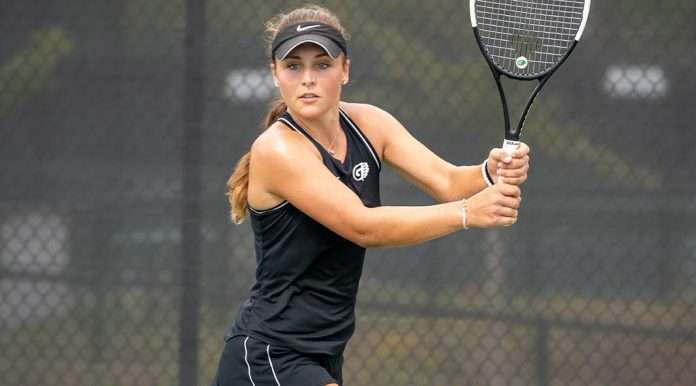 Last week the college tennis community put their seasons on hold or even ended them to help in the fight against COVID-19. However, some programs were able to compete before the ball stopped bouncing. UTR and the ITA are honoring their outstanding play with the UTR ITA National Player of the Week award. The award will be suspended until competition returns to normal.

The Saint Leo junior was undefeated in singles and doubles through No. 5 Saint Leo’s dual matches with Wayne State and Ferris State. Playing at No. 1 singles, Parker led the way with a commanding 6-4, 6-2 win over Wayne’s State Pierre Renaudie. Later in the week Parker continued to win. In straight sets Parker downed No. 16 Mader 6-3, 6-2. At No. 2 doubles, Parker and Trustfall defeated their Wayne State and Ferris State challengers 6-4 and 6-1, respectively.

Ekaterina Grib blazed through three dual matches last week to bring her singles winning streak to nine straight matches. The sophomore was undefeated in singles and only dropped a 6-3 match to Missouri-Saint Louis’s Predinger/Beagrie in doubles. She did not allow Predinger to get the best of her in singles – the sophomore Spartan recored a 6-3 victory over the No. 40 player in the country. Grib won all of her singles matches in straight sets.

Senior team captain Ritwik Chatterjee powered through six dual matches in four days to go 8-3. Chatterjee broke two school records during this stretch. Against Case Western Reserve’s No. 5 James Hopper, Ritwik set the record for career singles wins at 63. In his doubles match against Washington College’s Bonta/Meriot he set the record for individual career wins at 118. Playing at No. 1 singles, Chatterjee showed his grit and determination by winning three of four third-set tiebreakers to tally a point for the Lynx.

Millsaps College junior Grace Gaskin powered through to win three singles matches last week in Orlando. Gaskins flew through her match with No. 48 Beshentseva to win 6-1, 6-0. In a match with Division I Providence College, Gaskins showed grit after dropping her first set to Julia Migliorini. She battled her way back to take the second set 6-2 and force a third-set tiebreaker. Ultimately, she took the match 2-6, 6-2, 10-6. Gaskins closed out the stretch with a 6-1, 6-3 win over Martine Fiero of Dickinson College.

Wallace State Community College’s Sebastian Arce went 2-0 for the Lions over the past week. Arce battled through a tiebreak in the first set to take a tough match over Harford Community College’s Harry Collins. Arce then went on to win the singles match 7-5, 6-3. Earlier in the match, Arce and partner Will Brackin took down Collins and Josep Coll Llopis in a quick 6-0 match at No. 1 doubles.

During last week’s match with East Central Community College, Dixie Lei Hodges gritted out a third-set tiebreaker to help the Bobcats to a tight 5-4 win over the No. 20 ranked team. After dropping the first set 1-6 to Josie Hurst, Hodges fought off match point to push the match to a third set tiebreaker. Hodges edged out Hurst in a close tiebreaker win – 1-6, 7-6, 10-7.

The Georgia Gwinnett freshman phenom stayed perfect through three matches last week. Bertimon started the week off by downing then No. 2 ranked Martin Barbier in straight sets, 7-5, 7-5. Bertimon also recorded a straight set victory over No. 43 Francisco Faria from Olivet Nazarene. Bertimon currently holds a 10-0 record in singles and a 7-0 record in doubles. He is ranked No. 1 in singles and No. 15 in doubles after his outstanding play.