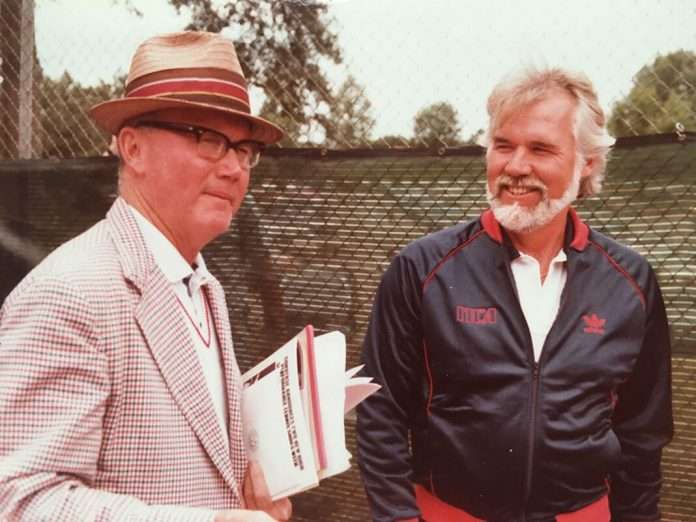 Kenny Rogers was known for many things in his lifetime – his decade and genre spanning music career, his philanthropic efforts, and even a 2014 GEICO commercial. However, his support of college tennis often goes without mention.

According to former ITA (then ITCA) CEO David A Benjamin, it was actually Kenny’s wife, Marianne Gordon, who introduced him to college tennis. Growing up in Athens, Georgia, Marianne would sell lemonade at the University of Georgia tennis matches. Years of helping raise money for the Dawgs’ tennis program resulted in a friendship between Marianne and head coach Dan Magill.

Marianne moved on from her Georgia lemonade days to become an actress – appearing in Rosemary’s Baby, Hee Haw, and a number of other productions – but did not forget about the Bulldogs. After marrying Kenny in 1977, she persuaded him to purchase a large estate in Athens.

The early eighties saw a rise in the popularity of tennis and with it Rogers’ sparked an interest in the sport. Lucky for Kenny, Marianne knew Coach Magill and was able to secure court time for them to hit at the Georgia courts.

After the couple was done hitting for the day, Kenny thanked Coach Magill and the Georgia coach gave him a Bulldogs t-shirt in return.

That t-shirt ended up answering a long-time dream of Coach Magill and Benjamin.

For years, Benjamin and Magill had been pushing for a college tennis hall of fame, but had no luck getting it funded.

“There were all these players in the past that had won the NCAA tournament and had gone on – famous players like Stan Smith, Arthur Ashe, and Tony Trabert and so on,” Benjamin recounted. “There’s a long list of players who were the best players in the world at that point.”

One week after Coach Magill gifted Kenny the Georgia t-shirt, the country star returned to the Georgia courts to see if there was a way he could pay back the kindness Magill showed him.

“Dan, who is one of the most clever people in the universe, said, ‘Well, actually there is something we have been talking about for a while. I don’t know if you would be interested, but something that is high on the coaches’ list – we’d love to have a Hall of Fame,’” Benjamin explained.

That was all the convincing that Kenny needed. In 1983, the ITA inducted the first class of honorees to the ITA Men’s Collegiate Tennis Hall of Fame. Since then more than 260 coaches and players have been honored for their contributions to college tennis.

“The first year [of the Hall of Fame] we decided in addition to having the banquet in the evening,” Benjamin reminisced. “We said, it would be fun to have a little celebrity doubles before the start of the [NCAA] team finals.”

Kenny, along with a number of other celebrities, were paired with former college tennis greats and current collegiate coaches to compete in a light-hearted exhibition.

“I put Dennis Ralston, who was one of the greatest doubles players in the world even though he was older now, with Kenny,” Benjamin said. “The idea was that they were going to win this little round robin.”

However, in the finals former UCLA player Allen Fox was not going to go down without a fight.

“Here’s Allen spoiling our plan by doing everything he could to take every ball and try to win,” Benjamin recounted.

Ralston and Rogers ended up pulling through in the finals to win. The ITA Hall of Fame Celebrity Doubles was played the year after that as well. Kenny continued to be a fan of college tennis – especially Georgia college tennis.

Kenny Rogers made an impact on so many individuals’ lives for many different reasons. For the Intercollegiate Tennis Association and college tennis, he answered a dream.