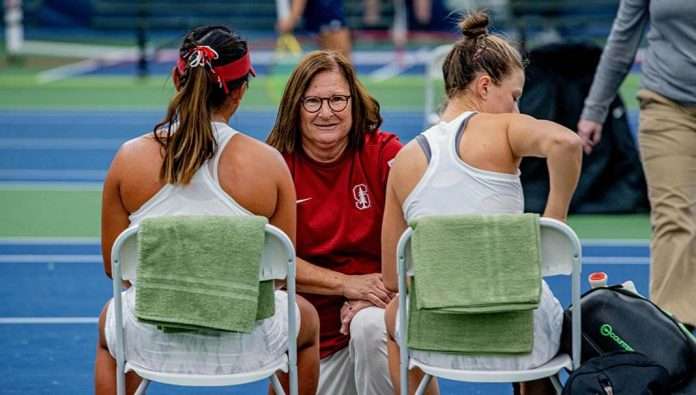 Stanford University is synonymous with excellence in NCAA Division I women’s tennis, and that’s thanks in large part to the decades-long influence of Lele Forood.

A former All-American for the Cardinal in the mid-1970s before turning professional, Forood earned All-American status for Stanford in 1976, and later reached a career-high ranking of world No. 30 in her time as a WTA pro.

A member of the WTA board for nearly a decade, including as secretary-treasurer from 1983-87, Forood earned the 1983 WTA Player Service Award, given annually by the tour to a pro who goes above and beyond for her peers. She also spent time in service to the tour by helping promote the start of the women’s event in Strasbourg, a lead-up event to the French Open that is still played today.

Returning to the Farm to complete her degree, Forood’s coaching career began as an assistant under her junior coach and longtime mentor, Frank Brennan, Jr. She later ascended to the associate head coach position in March 2000, and succeeded him as head coach beginning in the 2000-01 season.

USTA.com recently caught up with Forood to talk about her decorated tenure on Stanford’s campus, her time as a player and a player-administrator for the WTA in the tour’s infancy, the changes she has seen in college tennis over the past four decades, and more.

USTA.com: What made you want to attend Stanford and later return to coach?

Lele Forood: I was born in San Francisco, and I grew up for seven years in the Bay Area. Stanford and Cal were on my radar since I was very young. I had the little banners in my room for both schools. When I was applying to colleges when I was 17, I applied to both of those schools and a couple of others, including one in Florida—at that point, I was living in Florida, in Fort Lauderdale—but I think California had a little more for me to get back to where I came from. When I got admitted to Stanford and got some financial aid from them, it was a no-brainer. It was like, ‘OK, that’s where I’m going, for sure.’

My connection to the coaching side of things was that, when I left Stanford in 1979 to start playing for good, the women’s team’s coaching job was open. My junior coach was Frank Brennan, Jr., and I spent summers with him, his wife and their family in New Jersey. I used to play out of there in the summers from their camp. That was my home base in the summers in New Jersey. I told Frank that the job was open at Stanford. They were very interested in getting to California at that point, so he went out and interviewed and got the job for the fall of 1979.

I was always coming back and forth and visiting him at Stanford when I was in my professional career, and when I was back for good in 1987 after doing my tournament promotion to start the WTA event in Strasbourg, Frank asked me if I would be interested in coaching with him because he had an opening for an assistant position.

I was a little hesitant at that point because I wasn’t sure that I wanted to go into coaching, but I did. It was a very good team, and we won a national championship the first year in the 1988-89 season, and after that, I stuck with it. I enjoyed it, and I enjoyed working with my coach, so we did that for 12 years together until he retired.

USTA.com: What do you think some of the biggest differences are in regards to when you played collegiately and now?

Lele Forood: It’s almost like two different planets (laughs). Our opportunities were just getting started in those days in the 1970s. I enrolled in Stanford in the pre-scholarship era—well, the pre-athletic scholarship era—in 1974. Things like All-American [awards], that came in my sophomore year for the first time. I think [a big difference was] just recognition and opportunity in those days.

We were just really happy to start to see that we were going to be able to go to college, and maybe get it paid for, at that point. That was not the norm, and that was really a major change, a shift in things. At that point, the women’s [professional] circuit had just gotten started a couple of years [earlier], so we were seeing at the professional level that women were able to go out and create their own opportunities on the circuit.

USTA.com: What were some of your takeaways of your time on the tour, specifically on the WTA board?

Lele Forood: I was on the WTA board during my playing career in the 1980s. It was nice to hear what was going on on the business side of things and be part of the decision-making: to work on the questions of what the tour should look like, what tournaments should be playing when. It was very different.

In those days, for example, Australia was the fourth Grand Slam and not the first. A lot of people didn’t go to Australia in November to play the fourth Slam. The tennis world changed a lot in the 1980s. For Australia to have the weight and power of the other Slams, they needed to play first and get everybody there in their summer, in January.

Those were the kinds of things that we worked on with the board. We worked on ranking stuff, prize-money distributions, just a lot of how the tour worked.

USTA.com: When you took over the reins at Stanford, did you think that your teams would have as much success as you’ve had? What do you attribute the longevity of that success to?

Lele Forood: I was trying to not look at the big picture because that’s pretty hard and intimidating to do, given the amount of success that had already been realized. I happened to take over a really good team in what wound up being the 2001 [championship] season. It was about the day-to-day of trying to make that team better, competing hard and everything like that—and we wound up going undefeated that season, which was a good way to start one’s career (laughs).

At that point, my assistant coach was Frankie Brennan III, Frank’s son. He had been the volunteer assistant coach when I was the assistant, so we had already worked together for about five or six years. When Frankie and I took over, when I took over the head job and he became the full-time assistant, we were very familiar with each other. We’d grown up together, basically, almost all of our lives. We had a good rapport. We saw things similarly. We were both pretty technically oriented as coaches. We just felt that if we could make people better, everything else would fall into place.

We had early success—we won in 2001, 2002, we lost in the finals in 2003, and then we won from 2004-06. In our first six years, we won five titles, so at that point, we weren’t worried about whether we’d be able to succeed (laughs). After that, it got a little harder. The college tennis world has changed. There are many more quality teams with great coaches, and it makes it harder to dominate in that fashion.

USTA.com: Would you say that Coach Brennan was the biggest influence on your tennis and coaching career? Who else had an influence?

Lele Forood: He was absolutely the biggest influence in my tennis career. The players that I looked up to when I was a junior—certainly, you had Billie Jean King and players of her era who were really trailblazing in the 1970s. Chris Evert was a high school classmate of mine (laughs), so obviously I got to follow her career very closely when we were growing up. They were two people who were big influences on me growing up, but certainly Frank was the biggest influence.

He gave me the chance to start coaching when I was 15 at his summer camps. I was a little bit of a reflection of how he thought of coaching. We were all a little technically oriented. We’re not just out there hitting balls to people. Some coaches don’t like to get too technically into people’s games, but I don’t come from that school. That’s a difficulty sometimes with coaching: getting people on board with the idea that they might have to do something a little differently in order to have more success with a shot or a style of play.

I come from that world, and sometimes it takes college athletes a year to believe and get on the same page, and some never do. The ones that are more open to a coach’s thoughts are probably going to improve faster.

USTA.com: Where do you think college tennis, in particular, stands as a sport for women at the highest levels?

Lele Forood: I think it’s very good at the collegiate level. The way to evaluate it is to look at it in comparison to the professional game, and right now, there are so many former college players who are out there. In singles, maybe not as many, but in doubles, oh my gosh—people are making a huge impact on the pro game from the doubles side of things, and that may contribute even to those players being better at singles.

It’s a very high level of play these days, and it’s showing that more and more players, on the women’s side, especially, are trying to get into the professional game. Some of the rule changes in college tennis last year did not make it easier to transition, but hopefully some of that has been corrected. There needs to be a good flow.

The thinking used to be that if you weren’t great at 16, it was too late for you. They’ve realized that a 21- or 22-year-old, or players who’ve gone to college for two years who know, at most schools, that they’re going to get [the rest] paid for after that, if they come back… so those who turn pro in the middle of their [college] career, it’s a really good option for a lot of players who really want to play at the professional level.

The ability to not lose your scholarship if you do go and play for two years is just a dramatic improvement in what everybody’s choices are these days, and I think that the choice to go to college initially is greatly enhanced by that rule.

Some schools even honor one year of playing and then take care of the athletes’ scholarship when they come back for three years. Those are all things that make it less hard. It should not be hard for kids to have to decide to go to college in the first place. Your ability to start college, then leave, and then come back on somebody’s else’s dime, it’s just an incredible incentive to start college.

Read the rest of Lele’s Q&A on USTA.com