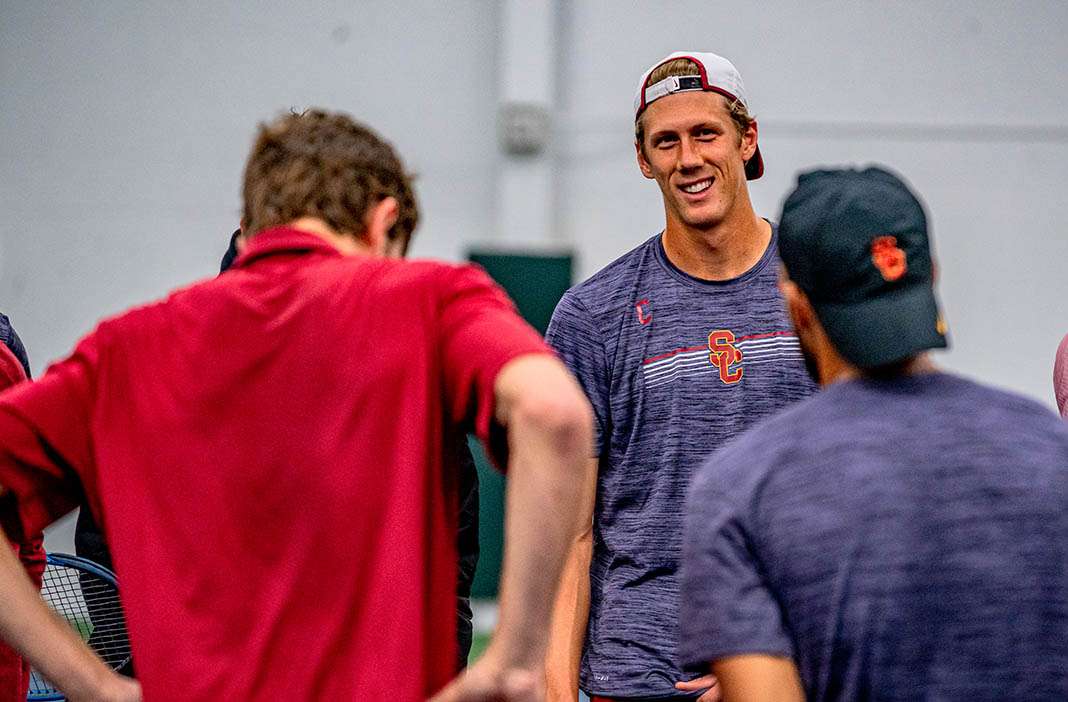 Though the college tennis season was cut short, the ITA still named its All-America teams for the 2020 campaign. USTA.com caught up with some of the upperclassmen on that list for a “Senior Spotlight” series that will run through the month of May. Next up is USC’s Riley Smith.

The USC Trojans were hoping a season that started with an ITA National Team Indoors title and a unanimous No. 1 ranking in the USTA/College Tennis Top 25 poll would end with an NCAA trophy. Instead, it ended abruptly in mid-March when the spread of COVID-19 halted college sports, along with just about everything else in the U.S.

But before the college season was fully put in the rearview mirror, a couple of USC men earned one more accolade by being named to the ITA All-America team. Senior Riley Smith and junior Daniel Cukierman were named doubles All-Americans, with the Israeli Cukierman also earning singles All-America honors. It’s the second All-America nod for Smith, who was also a doubles honoree in 2018, after his sophomore year.

Smith, a native of Long Beach, Calif., is one of three seniors on the Trojans squad, joining fellow Californians Brandon Holt and Rae Lan. All three have the option to return for a fifth year of competition, thanks to an NCAA exception. Should Smith come back, he will play a second season with his younger brother, Colter, who joined the USC squad as a freshman for the 2019-20 season. Smith’s older brother, Tanner, also played tennis for USC and graduated in 2019.

Here’s more from the two-time All-American, who plans to play tennis professionally after his college career.

USTA.com: What does it mean to you to be named an ITA All-American your senior year?

Riley Smith: Being named an All-American is a cherry on top for me. The biggest part of playing at USC has always been the team success. Having such a great year as a team, winning National Indoors and finishing ranked No. 1 holds more weight to me.

USTA.com: How did you find out the season was going to be cut short?

Riley Smith: Our whole team found out from something the NCAA posted online and, moments after, our coach confirmed it in a team meeting.

USTA.com: What was your initial reaction, and how has your perspective changed since then?

Riley Smith: Initially I was more worried about getting home and making sure my family was safe. I was very sad that our season was ended and we didn’t get to finish out the great year we were having, but I knew this was bigger than sports.

USTA.com: What moments or memories stand out from your college career?

Riley Smith: Winning Pac-12s, playing doubles with my brother, winning National Indoors and becoming an All-American my sophomore year really stand out to me.

USTA.com: Have you decided if you will return for a fifth year of competition, given the NCAA’s exception on eligibility? What went into your decision?

Riley Smith: I haven’t officially decided anything. There is a lot going into my decision, and I think time will tell what happens next and what opportunity presents itself. I want to do the best thing for me, not only for college athletics, but in life.

Read the rest of Riley’s Q&A on USTA.com