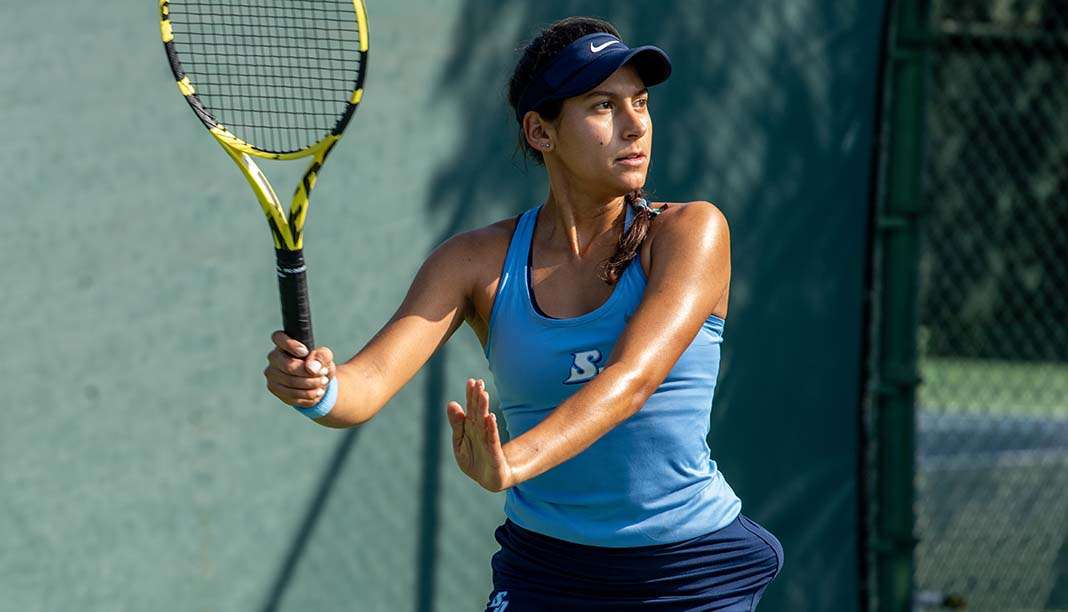 The 2020 Oracle ITA National Summer Championships powered by UTR will take place this weekend. The qualifying round begins today with main draw play kicking off Saturday morning. This year’s event is hosted by Texas A&M University. The ITA continues to be a leader in promoting safe, social-distancing tennis and will ensure all participants are following guidelines throughout the event.

2020 marks the third season that Oracle and the ITA are awarding prize money at the event with the distribution amounts ranging from $2,500 to $156.25. Due to the pandemic, this National Summer Championships will also feature a singles-only draw consisting of 64 men and 64 women players from across the country.

The draws for the event were released yesterday. The majority of players are staying close to home as 70 of the 135 male registrants and 65 of the 134 female registrants hail from Texas. Taking a dive into the top 16 players – we’ve previewed the top eight seeds from each gender.

The dominant Lebanese player enters the 2020 Oracle ITA National Summer Championships seeded in the top seat. While most players have been hitting practice courts and waiting for competition, Habib didn’t wait to play. Since returning to competition Habib has posted a 13-2 mark including wins over student-athletes from Tennessee, Penn, Duke, and Texas Tech. The Houston native breezed through the brackets at the King Daddy Sport/Racquet Pro Tournament series at the Chancellors Family Center in Houston last weekend and the Zevahc’s 20 Year Anniversary Challenge at the Raveneaux Country Club in Spring, Texas. During his junior season with Texas A&M, he recorded an 18-6 singles record along with a 9-2 dual match campaign. The Aggie is perched upon the second place mark for team wins.

Tennis is no stranger to Austin Krajicek as he’s seeded second in the event. Just a slight jog down the road from the Texas A&M courts — as he lives in Bryan, Texas — Krajicek will come to the event with a professional career under his belt. After he made his World Team Tennis debut last month with the Orange County Breakers, Krajicek will now turn his focus to the National Championship along with prize money in Texas. He holds a 12-24 singles record in Grand Slam and ATP World Tour main draw matches accompanied by a 73-70 doubles record with three career titles in doubles.

This season saw the Fighting Illini junior, Alex Brown, reach a career-high singles ranking of No. 9. Brown ended the season at No. 15 for singles as well as No. 25 for doubles, along with senior Aleks Kovacevic. Despite having his season cut short due to the pandemic, Brown was having a marquee season. His overall record for the season stood at 11-7 for singles and 8-5 for doubles, leaving his current career record at 57-36 for singles and 50-33 for doubles. The highlight of the season was likely Brown’s 6-3, 4-6, 6-4 singles road win over No. 70 Dominik Stary of Northwestern. While he has his mind on winning the Big Ten and national title with his team, Brown travels to the Summer Championships as the 3-seed.

Vazha Shubladze of Georgia State University men’s tennis is seeded at the four mark for the 2020 Oracle ITA National Summer Championships. Not only was his season cut short due to the pandemic, but Shubladze also suffered an injury after going 1-0 in singles. For the 2019-20 season, he was ranked in singles as high as 104 in the Oracle ITA Rankings. Shubladze moved to No. 123 in the national singles ranking, owning a 6-1 record in 2019-20 with three nationally-ranked victories.

Another Fighting Illini travels to the event. Zeke Clark, a dominant player for Illinois, enters as the five-seed. A player with explosive emotion on the court, Zeke has amassed an 83-42 singles career while with Illinois. He finished the shortened 2019-20 season with a 3-1 mark at No. 4 singles and 2-3 at No. 3. Clark was on a four-match win streak when the season came to a halt. Zeke will make the trip from his hometown of Tulsa, Oklahoma to play in the Summer Championships.

Texas A&M men’s tennis sophomore Noah Schachter will have a home-court advantage this weekend as he enters the event as the six-seed. Schachter is well known for his clutch final point as the Aggies toppled then No. 6 Florida in their biggest match of the 2019-20 season. The Wesley Chapel, Florida native has posted wins over players that have recently been a top feature for Texas, Minnesota, Texas A&M, and others. Noah boasted impressive play during the ITA Summer Circuit event in Lakeland, Florida. He won three straight-set matches to get to the semi-finals but ultimately fell to Alex Bernard.

After announcing his graduate transfer to the University of Oklahoma, Jonathan Sheehy will enter the 2020 Oracle ITA National Summer Championships as the seven-seed. During the 2019 event, he breezed through the competition to take the singles and doubles titles – ultimately earning him an automatic bid for the 2019 ITA All-American main draw. Sheehy played at No. 1 in singles and doubles during his senior season at Abilene Christian University. He was ranked as high as No. 77 in the Oracle ITA singles ranking. He finished his career at ACU with a 63-36 mark in singles, good for third all-time, and 49-36 in doubles. Hailing from Arlington, Texas – Sheehy looks to claim the Summer Championships singles title again.

Ilgiz Valiev is a Russian National Team member and winner of the 2015-16 Russian Team Championship where he was coached by legend Artemiev Eldar. Valiev will enter the event sitting at the eight-seed spot. With high-energy, he saw his best win over in-state rival Hady Habib at the May 30th Bay Area Racquet Club UTR event finals —  taking the crown and prize money in straight sets, 6-4, 7-5. Not only did he take the finals match in straight sets, but he also won each of his four previous matches of the event in straight sets. While in enemy territory, Valiev will seek another claim to fame at the Summer Championships.

Pepperdine’s Jessica Failla enters the 2020 Oracle ITA National Summer Championships as the top seed. Failla comes into the Championships on a three tournament win streak. She will look to build on an impressive spring college season. Failla finished the 2020 season ranked No. 35 in singles and No. 55 in doubles in the Oracle ITA Rankings. In late February, Failla downed No. 2 Anna Turati in Pepperdine’s 7-0 upset of the No. 4 Texas Longhorns.

Wolfpack senior Adriana Reami will look to make it back-to-back National Summer Championships women’s singles titles for NC State. Reami made it to the semifinals of the Millbrook Exchange Summer Circuit event in week 6. During her senior season in Raleigh, she earned a career-best No. 23 singles ranking and was ranked as high as No. 13 in doubles. Reami holds the NC State program record for career singles wins and is the first player in program history to reach 100 career singles wins.

Former Baylor Bear Rhiann Newborn will make the short trip from Houston to College Station for the Championships. Since playing at Baylor, Newborn turned pro. Newborn has competed in five tournaments over the summer – including the Summer Circuit tournament at the Bay Area Racquet Club. Newborn took home the title and the prize money at the Summer Circuit event. She holds a 27-16 singles record as she heads into the tournament weekend.

Anna Rogers comes to Texas A&M as the defending Oracle ITA National Summer Championships Women’s Singles Champion. The two-time ITA All-American is coming off a semifinals loss to UCLA’s Abbey Forbes at Millbrook Exchange Summer Circuit tournament. During the 2020 dual match season, Rogers hit her stride. She finished with a 23-8 singles record — in conference play a perfect 6-0. Rogers’ highest ranked win came over No. 28 Megan Davies of South Carolina. In addition to her title at the 2019 National Summer Championships, Rogers reached the doubles finals at the 2019 Oracle ITA National Fall Championships.

In-state junior Ashlyn Krueger comes to College Station as the 5th seed. The blue chip recruit will look to make a statement as she faces some of the top collegiate talent in the country. Krueger holds a 19-5 record — she’s 6-4 against her fellow blue chips.

Coming off her sophomore season with the Toreros, Solymar Colling looks to pick up where she left off in the 2020 dual match season. Playing at No. 1 singles and doubles for San Diego, Colling finished the abbreviated season with a 4-4 singles record and 4-3 doubles record. Colling finished ranked No. 65 in the Oracle ITA Singles Rankings.

Texas A&M Aggie Tatiana Makarova returns to the National Summer Championships after last year’s early loss to Stanford’s Janice Shin in the first round. Despite falling out of the singles draw early, Makarova powered her way to the doubles finals alongside Jayci Goldsmith. Makarova played the majority of the 2020 dual match season at No. 1 singles, amassing a 4-2 record. On the year, Makarova held a 20-5 singles record. The Russia native finished at No. 99 in the Oracle ITA Singles Rankings.

Five-star recruit Emma Staker rounds out the top eight seeds for the women. The Tulsa, Oklahoma native reached the finals of the USTA National Winter Championships. After a strong start, Staker was overcome by South Carolina’s Emma Shelton and finished as the runner up. Staker will look to make her mark against some of the nation’s top collegiate players.