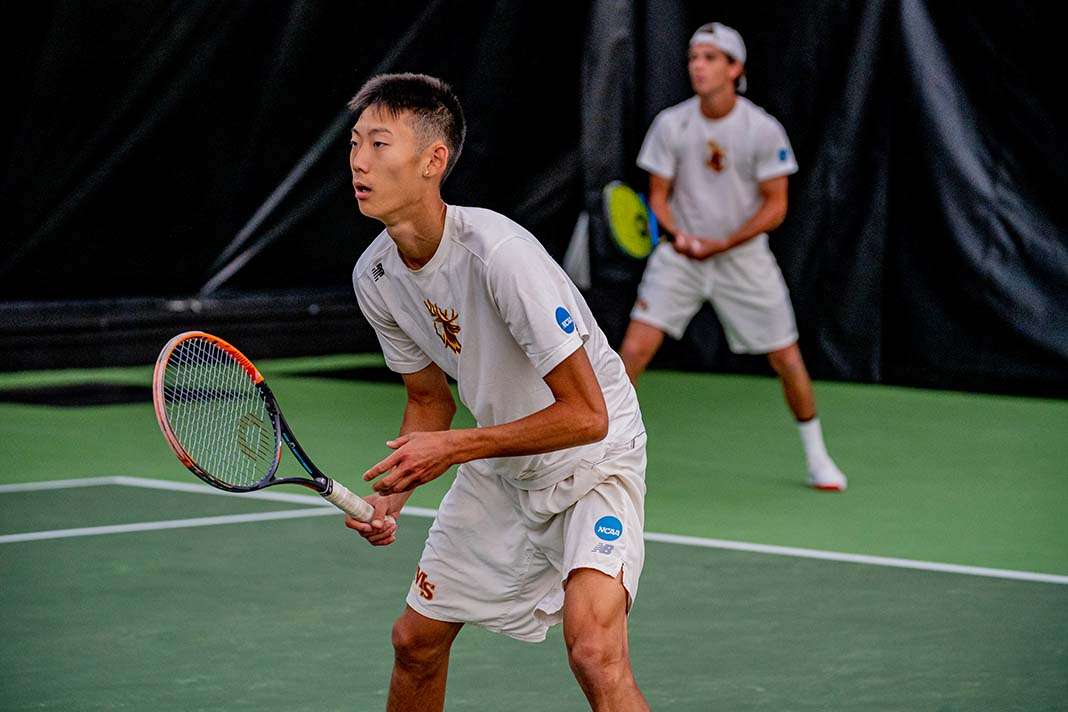 The 2020 ITA Ann Lebedeff Leadership Award and ITA Arthur Ashe Leadership and Sportsmanship Award winners were congratulated by a distinguished group of tennis legends. Billie Jean King, Chris Evert and David A Benjamin along with others wished the winners well on their future endeavors.

Listen to what they had to say below!

The award honors a recent college graduate who played college tennis and demonstrated excellence on and off the court, leadership on his or her team, as well as on his or her college campus and in his or her community. The annual recipient of the award demonstrates a passion and perseverance towards long-term goals, a commitment to social justice and equality, and pushes others to be leaders in addition to demonstrating his or her own leadership.

Daniel served as a captain for the CMS men’s tennis team for two years. He was a four-year starter with over 100 career wins before the 2019-20 season was abbreviated by the coronavirus. During his time at CMS, Park devoted himself to research on systems within pharmaceutical infrastructure. As part of a Keck Graduate Institute team, Park has spent the last school year working to improve the efficiency of a BioMarin Pharmaceutical Inc. process.

This prestigious award, which dates back to 1982, is presented to men’s and women’s student-athletes who have exhibited outstanding sportsmanship and leadership, as well as scholastic, extracurricular and tennis achievements in ways that embody the legacy of tennis icon and humanitarian Arthur Ashe Jr.

Paul Jubb cemented himself at the top of DI tennis when he won the 2019 NCAA Singles Championship. He holds the South Carolina record for career SEC singles match wins and wins over ranked opponents. He was awarded the prestigious 2019 Rafael Osuna Sportsmanship Award and honored as part of the 2019 SEC Community Service Team.

Chi competed on a top-five nationally ranked tennis program and earned her spot in the top 25 of the ITA singles rankings for most of her career. She has a career record of 112-34 and went undefeated in dual matches this year. Chi has been a participant in the Collegiate Athlete Pre-med Experience program (CAPE). Chi also spent a summer in China through the ACE program, working with children in a classroom and athletic field setting.

Sanchez touts a 110-49 career record. He went 24-12 in the 2019-20 season before it was canceled. Outside of his athletic accomplishments, he serves as the SAAC representative for the men’s tennis program. Sanchez also invests in the San Antonio community by volunteering at the San Antonio Food Bank, San Antonio Children’s Shelter, and tennis clinics.

After four years with the Knights, Jonathan holds a 140-61 career record. Playing at No. 1, this season she went 12-5 in singles – three of those losses coming to DI players. In doubles, Jonathan was even more impressive – recording a 17-2 record. She advocated for tennis and athletes for four years as a SAAC representative. She organized numerous service projects.

The senior has been named the captain of the Pirates’ men’s tennis team three times. Dimanche also serves his teammates and the sport as a whole as a SAAC representative on his campus. As a nod to his athletic and academic prowess, he also was named a back-to-back Southern Collegiate Athletic Conference Elite 19 winner. Dimanche was also named an ITA singles All-American in 2018.

Schmitz was named the team captain in her sophomore year and has served as such for the last three years. She was named the team MVP in both 2018 and 2019 along with being awarded the team sportsmanship award three times. She holds the program record for the most career singles wins and is second in program history for career doubles wins.

Poi led the Moundbuilders to a team ranking of No. 20 in the Oracle ITA Rankings during 2019 – the highest in program history. As an individual, Poi has been ranked every year that he has played for Southwestern. He was named the Kansas Collegiate Athletic Conference Player of the Year in 2019. The two-time team captain also held an internship with USTA Texas.

At the end of the 2020 season, she was the No. 5 singles player, and No. 11 doubles in the Oracle ITA Rankings. Her performance on the court earned her ITA All-American honors in singles. Pierson served as team captain in her junior and senior year and was awarded the Cliff Hamlow Champion of Character Award. Pierson volunteers with the Special Olympics tennis tournament and with the Santa Barbara High School tennis team.

The sophomore owns a career record of 20-12. He was awarded the Jones College Tennis Bobcat his freshman and sophomore year. In addition to his tennis accomplishments, McWilliams is an ITA Scholar-Athlete, a Phi Theta Kappa member, and president of the Baptist Student Union.