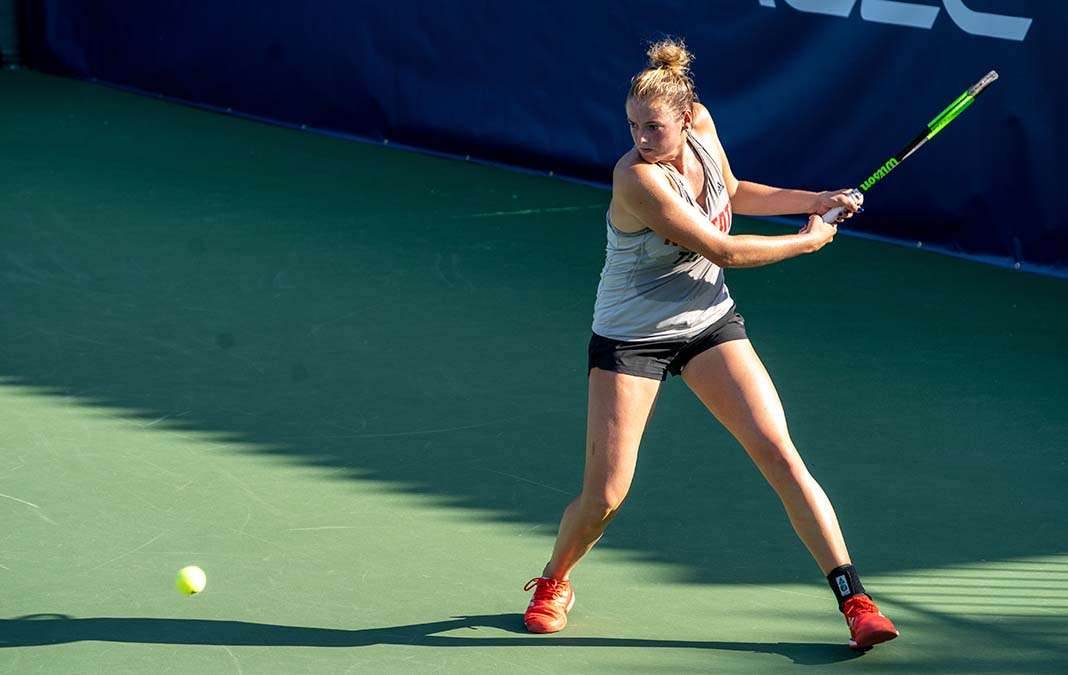 Competition for Week 1 of the ITA Tour: Fall Circuit by UTR has wrapped up and we’ve got the breakdown on what happened.

Daniels and Keberle each drew a slate composed entirely of collegiate players — Daniels matched up against her own teammates (Reami, Keberle, Rogers) from the quarterfinals on. Rogers downed Virginia’s Rosie Johanson in addition to Daniels — all in straight sets. Playing at No. 2 singles, Rogers held a nine-match winning streak before the season was cut short. Additionally, Rogers won the 2019 Oracle ITA National Summer Championships Women’s Singles title.

Before the pandemic cut the 2020 season short, the Wolfpack reached as high as No. 3 in the Oracle ITA Team Rankings. They were ranked No. 7 at the time of the last published 2020 ranking.

Week one of the Fall Circuit revealed some players to watch — in the collegiate and junior ranks.

At the Boar’s Head Sports Club event, upsets abounded. Ohio State’s Cannon Kingsley came into the event with the highest UTR and as a result received the No. 1 seed and a first round bye. Kingsley was bested in his opening match by Big Ten rival Patrick Maloney of Michigan. All-American Andrew Fenty reached the semifinals of the event, but eventually fell to University of Virginia incoming freshman Alex Kiefer. The Cavalier downed Fenty in straight sets and went on to win the tournament. On the women’s side, All-American and No. 2 seed Natasha Subhash fell in a third-set tiebreaker to blue-chip recruit Emma Charney out of Pate Tennis Academy.

With so many conferences cancelling fall competition for their tennis teams, the Fall Circuit has provided playing opportunities for collegiate players across the country. Week one of the Fall Circuit saw play at 11 different tournaments. Between the men’s and women’s draws, 70% of the tournament champions were collegiate players — all of which were Division I players.

The Aggies dominated their Fall Circuit event in College Station. The men’s and women’s finals were all-Texas A&M affairs.

On the women’s side of the draw, A&M sent five players through to the quarterfinals and three to the semifinals. Monday’s final pitted senior Tatiana Makarova against junior Katya Townsend. Makarova dropped just two sets against her teammate.

The men’s side saw a matchup between two newly-minted Aggies — Anish Sriniketh and Raphael Perot. Sriniketh is a transfer from St. Edward’s University while Perot is an incoming freshman from France. The senior player took the final match in straight sets. Sriniketh was a Division II All-American in singles and doubles last year in addition to the ITA Player to Watch.

The first weekend of the inaugural ITA Tour: Fall Circuit by UTR was a success and while getting back on the courts is a huge win for tennis, the ITA is committed to putting the health and safety of players, officials, staff, and the greater host communities first.

As a result, we’ve had players forced to pull out. At the University of Nebraska, Kearney event, the top two seeds on the men’s side were forced to pull due to an abundance of caution surrounding a potential COVID situation. While it is disappointing that some players are unable to compete, the ITA is taking all precautions to keep our players and our sport healthy. The ITA has released safe play guidelines for the tournament directors to follow along with local and regional rules.

Checkout the rest of this weekend’s results and register for upcoming tournaments here!